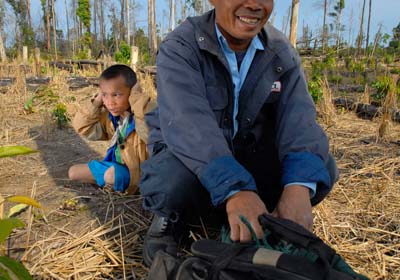 A young boy named Poey clasps his ears as a clearance team detonates a bombie in his family’s farm field. Poey’s father had risked considerable danger by moving the bomb to a tree so Poey and other children would not find the bomb.

On May 30, 111 countries adopted a treaty to ban cluster bombs. Some of the world’s biggest users of these munitionsâ€”the United States, China, Russia and Israelâ€”did not sign the treaty. But the agreement, nonetheless, is a big step toward victory for activists who have fought decades to rid the world of these explosives.

What are cluster bombs? Large canisters filled with hundreds of tiny bomblets, or “bombies.” The canisters open in the sky, spreading little fist-sized bombies across the targeted land. Some of these bomblets are painted bright yellow and look like miniature pineapplesâ€”kids can mistake them for toys. A bombie can lie in the ground for decades until someone kicks it, tosses it or smacks it with a hoe.

What’s it like to farm in a land littered with bombies? Read more about the dangerous fields of Laos.

7 replies on “Farming with Cluster Bombs”

And our marvelous government not only neglects to sign the treaty, but actively tries to undermine it!

225 days until we get a more responsible government–if all goes well. Grrr.

Thanks Karen for that article. We Lao are so unknown to so many who weren’t intimately involved with the Vietnam War…It’s a sad reality but so many Lao have been maimed and killed by these UXO and so many are ingorant of the plight of those Lao who suffer because of the carelessness of the U.S. government. What can we do?

Thanks for your comments. This is an issue that angers me enormously, which inspires me to continue writing on the subject. Since Jerry and I started documenting UXO issues in Laos, we have found so many Americans who knew nothing about the problem. Simply talking about the issue helps, I think. Those who are politically active can continue to fight for a total ban on these weapons. Here’s another great resource: COPE, a rehabilitation center in Vientiane that makes prosthetic limbs. A large number of COPE’s clients are UXO victims. Check out the COPE website for ways to help directly. http://www.copelaos.org.

I’ve just received this link to a BBC fundraising video for Power International, the founding donor of COPE in Vientiane. The footage features some of the people we met at COPE and PCL, a bomb clearance group:
http://www.youtube.com/watch?v=gwletkkqd40

[…] a quick note to let you know I have a profile of Jim Harris, the Wisconsinite who clears bombs from Lao farm fields, in this month’s Milwaukee Magazine. Sorry to say the article is not online. « […]

Please find a link to the website of Jim Harris.
He keeps a very interesting journal.