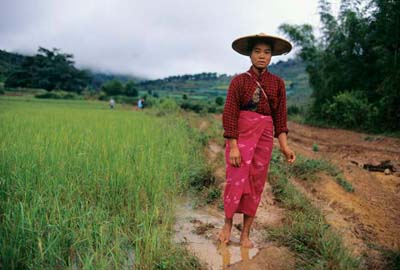 Farming in the Shan State

Iâ€™m slicing potatoes and plucking rosemary and thinking about a death toll of possibly 100,000 in Burma’s cyclone. Iâ€™m 8,500 miles away in New Mexico, and I donâ€™t know what to sayâ€”except to say what I feel, from the gut. Thatâ€™s where these things hit hardest; these storms, be they natural or political, that rip through human life. I ache to think of the hunger that will follow.

Cyclone Nargis raged with 12-foot storm surge and 120-mile-an-hour winds. It was the most destructive Asian cyclone in 17 years, one of the worldâ€™s biggest disasters since the 2004 tsunami. It flattened homes, tore the rooftops from shanties and demolished the rice-growing belt that feeds the nation. Food prices doubled overnight. Itâ€™s a matter of penniesâ€”but if you have only pennies, they mean everything.

When the first shipments of foreign aid reached Yangon this week, workers reportedly unloaded crates by hand because forklifts were not available. The US State Department has said it wonâ€™t give Burma more than an initial $250,000 contribution unless the ruling junta allows a US assessment team to enter the country. Laura Bush scolded the generals for failing to warn people of an impending storm. Itâ€™s disaster, followed by politics as usual; and the people go hungry. 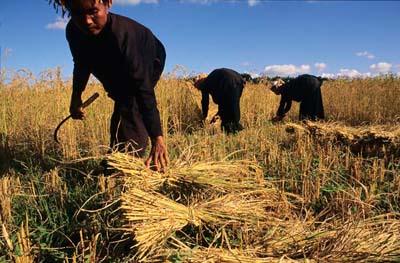 Problem is, they already were hungry. I remember years ago meeting a young man named Etan employed at a restaurant in the tourist town of Kyaiktiyo. He worked seven days a week to earn $7 a month. He slept in the restaurant dining room, â€œon that table, only one blanket and one pillow,â€ he said. He sent money home to help feed his mother and three sisters.

Poverty has long been Burma’s biggest danger, another man named Than told me a few days later in the northern Shan State. The 78-year-old ran a restaurant near a monastery, where an old monk had grabbed my hand, prayed for my good health and shoved me a couple of oranges amid peaceful chanting from the temple interior.

Than told me his country is run by crooks who abuse their money. Foreign companies have left, in protest, and consequently the Burmese have less work. Many people go hungry, he said, eating only once a day.

And many people grow all of their own food, on patchwork lands of rice, corn, sesame, peanuts, beans and greens. Local farmers told me they were required to sell a quarter of their rice harvest to the government at cut-rate prices.

â€œThe government is killing the life of the people,â€ said a guide whose company led tourists through farming country that was technically â€œoff-limits.â€ He held hope that one day the generalsâ€™ oppressive regime would end. â€œBecause we do not live forever,â€ he said, and all of this would be but a â€œblack spotâ€ in the history books of Burma.

It’s interesting, I ate some of the freshest, liveliest dishes on that tripâ€”peanut stew, ginger fish curry, bean and tomato soup, cabbage straight from the ground, new avocado with sugar for dessert. Even in the cities, the Burmese made the most of what they had, for they never had a choice. â€œSome of the best food is prepared in the dimmest, grungiest of kitchens, eaten on the greasiest of floors,â€ I wrote at the time.

This week, Iâ€™m wondering about the Burmese people I have met. Do they have enough to eat? Are they standing in line for water with thousands of others? Will the soldiers allow them food?

I read again my journal from rural Burma, and I come across a line that seems, sadly, to hold perpetual truth: Their earth is abundantâ€”but it does not belong to them. 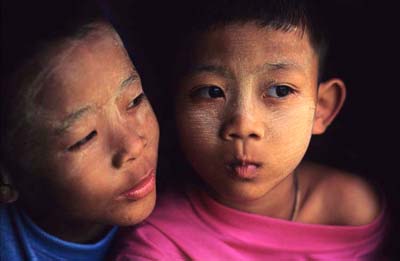 I’m just writing to let you know that Aidan Brooks from the blog Aidan Brooks: Trainee Chef was singing your praises in a video interview we did with him recently – you can watch it here:

Hi Laura – Many thanks for the note and the link. I’ve been on the road recently and just had a chance to see the interview now. Hoping I can get out your way later in the year! Cheers.

Karen,
The attitude of the junta towards outside help, let alone the suffering of its own people beggars belief. Whatever their views on the US or the UN are I don’t see as they have a choice. It is incredible to think that you have to even wonder how many people must die before politics are put to one side for the greater good.
Incredible.
Miles

Hi Karen – sorry about the message above, which I only just read. I appreciate that Laura has a marketing job to do, but I don’t think this blog post was the right place to do it.

It’s not been the best of times recently for Asia, north or south, has it? It’s one thing suffering natural disasters, but quite another to be oppressed by your own government. I do hope that aid gets into the country soon and gets where it’s needed, rather than into the army stores.

That was really a lovely, thought-provoking post. I’ve been thinking a lot about the wastefullness I’ve become accustomed to in my own live. An event like the cyclone highlights this, but really it’s there all along. Of course this is much more complex then whether I throw out uneaten produce, but I have to think that my attitude– my government’s attitude — toward the haves and have nots can’t be helping.

Miles, the news only grows worse, with the UN now estimating 2.5 million people affected by the cyclone, and further storms brewing off the coast. The BBC has a rather remarkable map of the destruction, http://news.bbc.co.uk/2/hi/uk_news/7389848.stm.

Trig, no worries! I don’t mind at all. Yes, tremendously difficult times. A terrible imbalance in the forces that govern Asia…

Thanks, Renae. Times like these always put the rest of life into perspective….

Karen, your blog is always honest, eye-opening, and thought-provoking especially compared to many of the blogs out there by self-absorbed brats. Don’t get me wrong, I also enjoy the beautiful presentations of wonderful foods from a part of the world you know so well and love. Thank you.

Thanks, Caroline. I do my best to avoid self-absorbed brattiness!

And now I understand the US is withdrawing their ships filled with aide, after weeks waiting for entry. The generals have sent everyone to the voting booths, back to work & back to school.
I seem to remember, during the height of world concern after the tsunami, aide was then offered to Burma. Can we ever know the truth in their refusal of help? How many died then?

Joan, whatever we are hearing and reading about Burma on the outside, I can guarantee it’s far worse for the Burmese enduring the situation within.