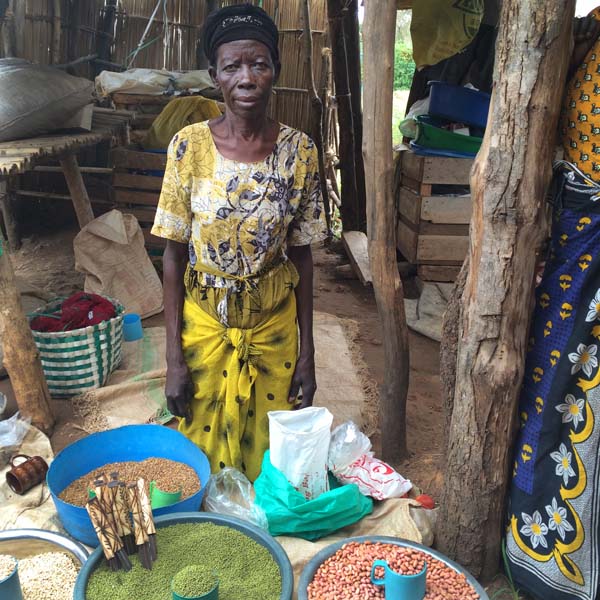 Juru Joyce is a South Sudanese vendor who sells beans and peanuts at the market in Adjumani town, in northern Uganda. I’ve come to talk with her specifically about those peanuts. As some of you know, I have spent the past couple of weeks in Uganda, on an IWMF fellowship to report on the South Sudanese refugee crisis. The situation has overwhelmed Uganda’s refugee settlements since fighting flared in July. And during my time reporting here, I have learned that a common food is central to this cross-border story: peanut paste, a.k.a. peanut butter. Everyone eats it, if they can. If they are lucky enough to have it (many recent refugees don’t have money to buy it, and it’s not part of the rations they receive in the settlements). Peanut paste is a key ingredient in so many dishes eaten by Ugandans and Sudanese alike. It’s a symbol of unity, and also of the losses suffered in war. So I go to Joyce with questions in mind. When I step up to her stall, I don’t expect the story she reveals—though I am not surprised. I’ve heard a lot in the past two weeks.

In 1991, Joyce fled warfare in her homeland, seeking refuge across the border in northern Uganda. Like thousands of others, she lived for years in a Ugandan refugee settlement until one stormy night in 2004. That night, she suffered a blow like no other. Soldiers of the Lord’s Resistance Army raided her settlement, kidnapping children to be swept into their notorious war machine. Joyce fled to the bushes and survived. But the LRA captured her kids, and those of her brother and neighbor—10 in all. She has heard or seen nothing of them since. After that, Joyce says, she wanted nothing to do with a refugee settlement ever again. So she moved to Adjumani town and struggled to make a business. With the help of a charity, she was able to start selling beans and peanuts in the market. And she earns enough money now to eat three meals a day.

More than 1 million South Sudanese refugees are now living in neighboring countries; 185,000 of those have arrived since July. Every day, thousands more arrive at the border. In just two days last week, 6,715 refugees crossed from South Sudan to Uganda. 6,715 in two days! The UNHCR is drastically short of funds for this crisis, and the World Food Program has had to cut rations for anyone but the newest and most vulnerable recipients. The newest refugees receive hot meals of porridge in the morning, and posho (maize) with beans in the afternoon. Those living in settlements currently receive rations of sorghum, maize, fortified corn/soy blend (CSB), and oil and salt if it is available. Time and again, when I ask refugees about food, they tell me how much they miss, and how much they need—for flavor, for nutrition—the peanut paste they no longer have.

The stories I hear from refugees are heartbreaking. One day, during a rare break on the ground, I sit with an IWMF administrator at the entrance to Nyumanzi transit center, where thousands of new arrivals camp in tents while awaiting transfer to a settlement. My colleague (who is not a journalist) remarks how difficult it is to insert herself into someone else’s life and story, asking questions and taking pictures. She wonders how it felt as a journalist. I tell her yes, it is difficult, but I stop taking pictures when people say no, and I don’t force an interview on someone who doesn’t want it. There is also a flip side to the perceived intrusion. I tell her about the many times I have worked on stories involving people with tragic histories and NGOs trying to help them. And I tell her that often, NGOs aim to protect their “clients’” privacy by keeping journalists away (or regulating how interviews are conducted). The right to privacy is a legitimate right. But so is the right to free speech. And I tell her that I often find people really want to share their stories—even after NGOs or authorities try to prevent them. They want an audience. They want people to know what they have endured. And they want someone to listen because no one ever has. That right—that need—deserves just as much respect as the right to keep a story private.

To all the South Sudanese and Ugandans who have shared their lives with me this month, I thank you. I hope your words will reach many eyes and ears, and people who want to listen. 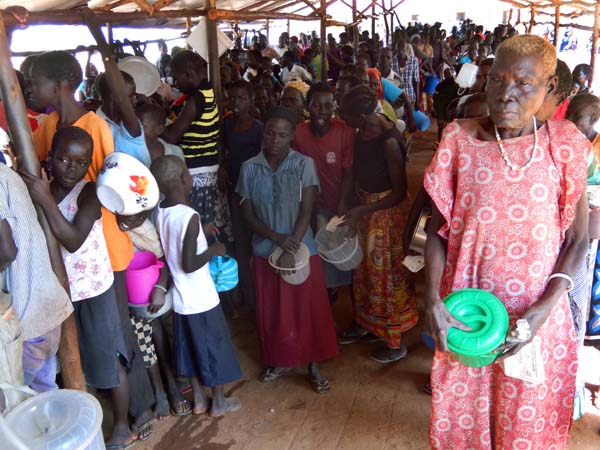