Happy Thanksgiving week. As some of you know, we recently returned to the US after a month of reporting in Timor-Leste, followed by a week of working in Singapore. A few nights ago, I awoke sleepless and jetlagged 3 a.m. I grabbed a pen and notebook, went to the living room and started writing about terrorism and this world we all share: 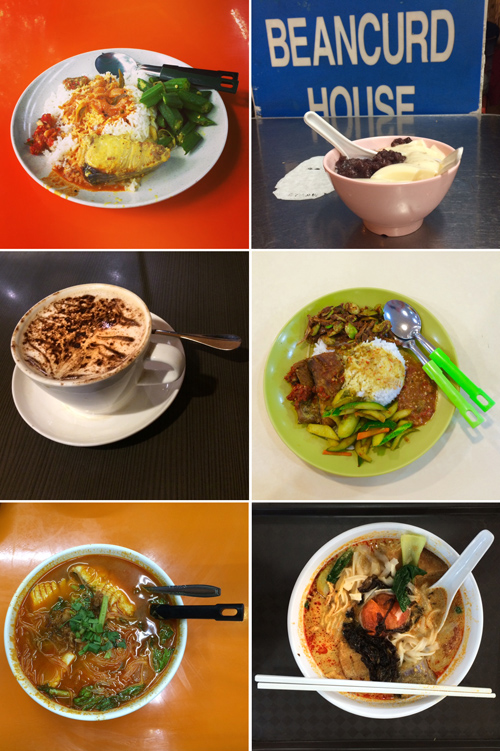 When I learned of the blasts in Beirut, I was in transit from Singapore to Dallas, and I caught blips of the story at airport stops along the way. When I heard about Paris, I was home. I was driving around Albuquerque in a jetlagged fog, angling between Trader Joe’s and Whole Foods, aiming to restock the fridge after six weeks away. I was thinking about the remainder of my shopping list—cilantro, ginger, dish soap—as NPR aired the shocked and somber voices of those on the ground.

Just the day before, Jerry and I had left our hotel in Singapore and taxied through a neighborhood predominated by Muslims and Chinese. Next door was a popular 24-hour food court where we ate a handful of meals the previous week. Customers gathered all hours of the day and night, drinking sweet tea and chatting across bright orange tables bordering a busy street. Worlds and cultures converged on that corner, united by food. Side-by-side vendors sold Chinese fish noodle soup, laksa, mee goring and nasi campur. Women in headscarves ate among others in shorts.

That food court was a lesson in tolerance, and so was the clientele. Looking back now, just a few days later, it is eerie to recall the conversations Jerry and I shared in Singapore about the level of deference that city upholds. Singapore: a hub of capitalistic consumerism, born of ethnic mix and a history riddled with violence. Diversity isn’t a mere aspiration or meme in Singapore, it’s the core of national identity. (The people are predominantly Chinese with substantial populations of Malays, Indians and Eurasians.) Sitting strategically at the southern tip of the Malay Peninsula, this island has long drawn from from cultures across the globe. Through the centuries, it shifted hands among early kings, British colonizers and Japanese forces. For a short time, it was part of Malaysia before separating in 1965, following race riots and crippling political strife. Peace and stability came with high prices. Founding father Lee Kuan Yew, who governed from 1959 until 1990, aimed for economic progress combined with multicultural co-existence. But he was roundly denounced for his policies suppressing free speech and political opposition. Lee, who died earlier this year at the age of 91, was a dominant force; he saw no other way toward economic prosperity and peaceful co-habitation of the island’s disparate groups.

Day to day, on Singapore’s sidewalks, in its offices and shops, there is a palpable respect for others. Restaurant windows post notices: “No pork, no lard.” Street signs are written in English, Mandarin, Malay and Tamil. These accommodations reflect an understanding of diverse needs and views. More importantly, they reflect a willingness to accept the differences that make Singapore what it is. Many argue the country’s policies don’t go far enough. Some debate whether the city is “truly multicultural” or simply tolerant of multiple races and ethnicities. Regardless, it’s a start. In an age when the twin fears of terrorism and immigration trigger intolerance worldwide, we could all use a little more acceptance, a lot less condemnation. We could all strive for peaceful co-habitation. 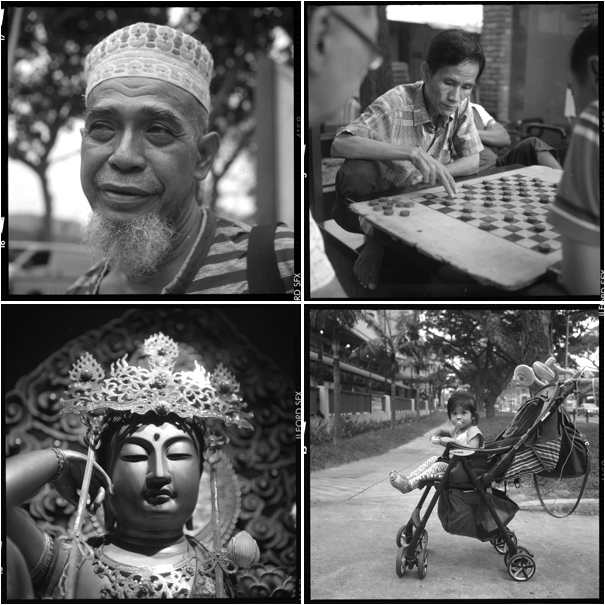 The day after leaving Singapore, I sat in a Whole Foods parking lot checking my phone. I read the first message from a Facebook friend in France. “What happened today in Paris is a horror, but we are safe….” As I drove south toward home, the horizon turned a brilliant scarlet as the mountains painted deep, dark silhouettes against a starry sky. I listened to more NPR. It was, of course, the biggest story of the day, and again the next.

And then a backlash began with social media critiques on personal grief. Let us not forget other victims in under-covered places, many implored; let us not diminish the agony of Paris, others insisted.

We are all just trying to relate. As human beings, that is what we do. That is how we form our understanding of the world. For the millions of us lucky to have escaped terrorism in our homes and in our own little circles, we empathize through the experience of others. We feel through the small connections we can make with people and places we know. This is how we grasp for comprehension. This is where the inspiration to make a better world begins.

As I listened to reports from Paris, I thought of the people I’d met in Timor-Leste in the month before I traveled to Singapore. Timor-Leste, formerly known as East Timor, is a tiny half-island nation still reeling from its own years of terror, working hard now to build an independent identity. I was there when the bombings in Turkey occurred last month. (How many bombings can the world take in a month?)

Now, this month of November marks 500 years since the Portuguese landed on Timor Island and established a colony on the eastern end of the Indonesian archipelago, a region rich with oil and timber. The Portuguese kept their hold on Timor until 1975 following a coup in Lisbon. Nine days after Timorese revolutionary leaders declared independence from Portugal, Indonesia invaded with an OK from US President Gerald Ford and Secretary of State Henry Kissinger. This was right after the Vietnam War. It was a time when the fear of communism dictated geopolitical maneuvers, and the prospects of natural resources shaped international policy—as they do today.

For 24 years, the Timorese people lived under a brutal occupation, which led to the deaths of some 200,000 people—a third of the population back then. In the early years, Indonesian forces bombed the interior of the island from land, sea and air. Thousands of civilians fled their villages to the mountains, where they camped in caves. 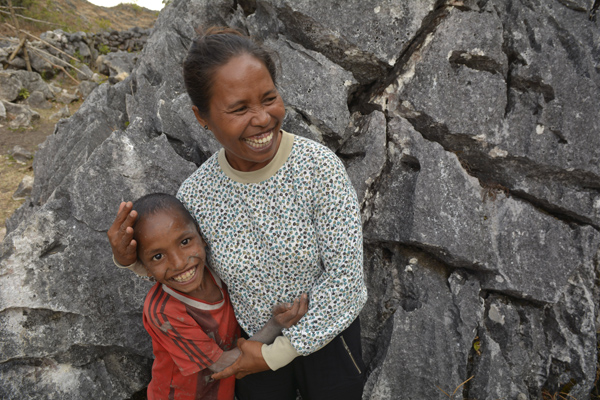 Mana Leo atop the mountain where she and her family hid during the Indonesian years. She is hugging Paul, a local village kid who admires her greatly. Mana Leo, a principal, encourages Paul to stay in school.

Just a couple of weeks ago, just a couple of weeks before Beirut and Paris and Nigeria and Mali, I hiked through with a lovely woman named Leopoldina Guterres, known as “Mana Leo.” We climbed a steep mountain where she and her family hid during the raids. She was 7 years old when the terror began. She carried her newborn sister at her hip while her mother searched for food.

For years, Mana Leo and her family, like many, ate whatever they could find: wild beans, dried potatoes, roots and tubers. Indonesians shot thousands of Timorese. Many more died of starvation and thirst. Small graveyards are scattered across the mountain today—red crosses mark those who died fighting; white crosses denote many more who died of disease and hunger. “Sometimes seven, eight people in one family died,” Mana Leo told me. Sometimes children and parents died on the same day. There wasn’t time or means to bury them all.

These are the memories that shaped Mana Leo’s childhood, and these are the memories she still carries today. From Timor to Paris, Beirut to Kenya, Syria to Iraq and far beyond, millions of memories are imprinted in bloodstained shirts and the blistered feet of treacherous marches toward freedom and peace.

Jerry and I spent four weeks crisscrossing Timor-Leste to report on health and development. We heard stories like Mana Leo’s again and again. In 1999, the Timorese people were granted the right to vote in a referendum, and they overwhelmingly chose independence. Indonesian-backed militias retaliated in a rampage of rapes, massacres and fires that destroyed much of the country. The UN intervened, and Timor-Leste became fully independent in 2002. Thirteen years later, we find a hospitable, tolerant, forgiving, energetic population set on a better future despite the scars of its past.

I thought of Mana Leo last week in Singapore, as I threaded my way through a society evolved from its own historical scars. And I have thought of Mana Leo every day since the Beirut and Paris attacks. Forty years later, the memory of terror still brings tears to Mana Leo’s eyes, but she is alive.

In fact, she is more alive than ever. She is a grade school principal, the manager of a reforestation project and the mother of a house that feeds and shelters 20 neighbors and relatives entrusted to her care. Mana Leo can never bring back the dead. But she can make her world a better place than the departed ever had a chance to see.

Surviving the past has given Mana Leo an unbridled will to live in peace. And that will for peace may well be the final triumph over terror.

Reporting from Timor-Leste was supported by a fellowship through the International Reporting Project (IRP).