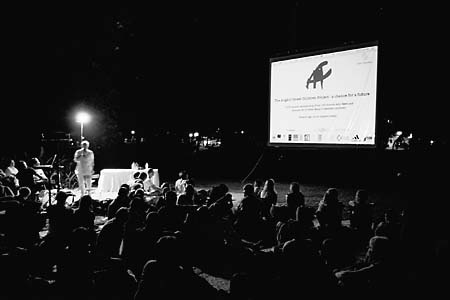 This has nothing to do with food. (Well, except that too many hotdogs after midnight are a bad thing. Same with too many missed meals, too many late nights, too many early mornings, too much second-hand smoke over bad beer and a life-threatening lack of coffee before 11 a.m.)

This has nothing to do with food, but it has to do with interesting life and the sort of work that whacks you upside the head and reminds you of all the important stuff going on in the world. If you put aside all the technical glitches, disorganization, ego inflation and butt sniffing, the Angkor Photography Festival serves up a stunning array of artistic photography and photojournalism, and the rare opportunity to view it just down the road from the world’s largest and most impressive religious structure ever built. Not only that, you get to meet many of these amazing, quirky, gifted, intrepid photographers whose work you’ll see on the big screen.

To the point: view these photographers. There are, of course, many more who are equally notable (like my loving husband, whose exhibit you can see in part here). But those listed below are well worth your time, and their work should somehow move the world:

Kishor Parekh. The India/Pakistan War. So overlooked, so heart-breaking.

Felice Beato. The first photojournalist, they called him. That may be debatable, but the debate does not diminish the value of his work.

Suthep Kritsanavarin. The Mekong giant catfish. What a pity such imbecilic technical issues detracted from the richness of his photographs as displayed in the slideshow.

Stephane Janin. A pinhole exhibit of Cambodia. Had the organizers announced his slideshow was showing upstairs, we could have seen it. Missed it on the big screen, but saw it on a computer monitor a few days later at Stephane’s gallery. Magnificent, especially with the soundtrack.

Vandy Rattana. Looking in my office, an intimate view of life at work in Cambodia. One of the few Khmer photographers to exhibit his work at this year’s festival.

Marti Mueller. The Survivors, photos of refugee camps on the Cambodian-Thai border, 1979-1980.

Remissa Mak. When water rises, the fish eat the ants. When water recedes, the ants eat the fish. Had the pleasure of viewing this awesome naturalist display at his Phnom Penh exhibit. Another one of the few Cambodian photographers invited to join this year’s festival. (May we hope for more Khmers in the festival next year.

2 replies on “What I Learned Last Week”

Thanks for posting those links. This is a yearly event — always in Siem Reap?

This was the second year, but the festival is expected to continue and grow. And yes, always in Siem Reap. The director has big ideas in mind for next year. Many of the organizers and photogs involved are French.