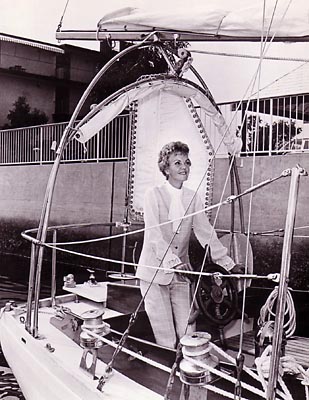 Sharon in her sailor’s suit

Right about this time of year, 42 years ago, Sharon Sites Adams learned to sail. She loved her newfound hobby so much, she bought a boat and christened it the day before Thanksgiving. A few weeks later while writing Christmas cards in the harbor, Sharon had a thought: I wonder if I can sail to Hawaii alone.

Six months later, Sharon embarked on the first of two journeys that would make her famous. She became the first woman to sail solo from the mainland United States to Hawaii, and in 1969 she became the first woman to sail the Pacific alone. SheÂ accomplished her feats inÂ whatÂ remained the dark ages of sailing,Â long before the Internet or GPS. Today, Sharon lives just outside of Portland, Oregon. Together, weâ€™re writing her memoirs, Pacific Lady, forthcoming from the University of Nebraska Press.

Yesterday, I re-worked the part in which Sharon prepares her boat for weeks at sea. The expedition from California to Hawaii would take little over a month, but she stocked for 90 days. As her instructor told her, if she missed Hawaii she might drift out there until she hit the Solomons or New Guinea. That meant the necessity ofÂ filling a 10-gallon water tank and 26 one-gallon jugs, stowed throughout the boat. As for eats:

I would survive on canned foods stored in the bilge, which meant I had to remove each label, mark each can with grease pencil and dip the cans in lacquer to prevent rusting. I threw a lacquering party, and my friends pitched in. I packed a well-balanced mix of meats, fruits and vegetables in small containers, since I didnâ€™t want leftovers. But the lack of labels worried me. What if the pencil wore off? No pictures, no names, nothing but a mystery inside. What if I grabbed beets for breakfast? I despise vegetables in the morning. Those little cans held enormous psychological clout. I would learn out there, in the great expanse, that food had the power to make or break my mood. 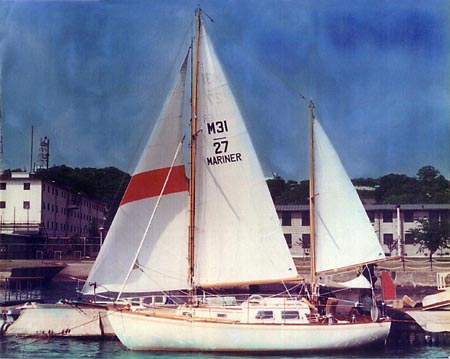 Thanks, Michelle. Sharon is a very impressive woman. And to think, she did it in a day when women just didn’t do such things. She was a 34-year-old widow (her husband had just died of cancer) when she went for a little drive one Sunday, saw the marina and wondered how the boats worked. Less than a year later, she’d set a world sailing record.

Wow, what a great story – looking forward to it!

This looking interesting , now just to find my way around here.
where is the story…?

Zen, the book should be out late next year. It’s tentatively titled Pacific Lady and should be available at a bookstore near you. Thanks for your interest!

[…] The manuscript is out of my hands and in the sweet care of FedEx. I don’t even have a photo to give you. I dropped it off at 10:30, the Friday before St. Paddy’s Day, and we went straight for a few beers. What better time for a good Guinness? […]

Ms. Adams is my mother’s cousin, and I would love to give Mom the book for Christmas. Where might I find it? The above link to University of Nebraska Press didn’t work. Thanks in advance!

Hi Jennifer,
Thanks so much for your interest. Unfortunately, publication has been delayed until 2008, most likely in the fall. Such is the publishing industry. But publicity info should be out soon — I can keep you posted.
Thanks, also, for the heads-up on the broken link, which is now fixed.

Sharon is my first cousin and I have followed her adventures back in the 60’s , talked to her many times and heard her talk, but I am still looking forward to reading the book. Hope it comes out sooner than fall 2008. Keep me posted also. Thanks.

[…] books feel like forever. You write and pitch and write and edit and rewrite and plan and write some more. Weeks turn to months turn to years; so long, you almost (but of course never really) forget. But […]