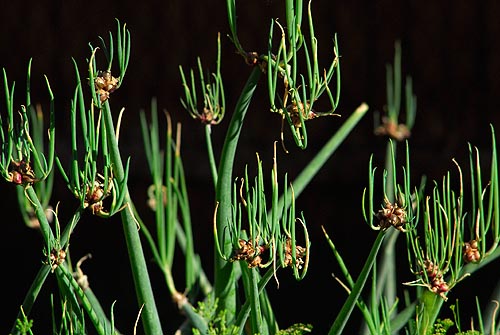 Three summers ago, we bought a little house near the Rio Grande. You might recall the dump that it was. It’s still a work in progress (and I’m beginning to think we will never reach completion). But every now and then, I glimpse a few photos of years past and I see that we have indeed progressed—all new kitchen, new floors, new windows and trim.

But the most remarkable changes have taken place outside, in a fertile yard with peaches clinging to young branches, a pomegranate tree that’s nearly doubled in size, five productive varieties of grapes (one so laden with fruit, its bunches touch the ground—we can’t keep them up!), a shaded table for our outdoor dining, and two comfy hammocks strategically placed for alternate daytime/nighttime use.

Three summers ago, I planted a small herb garden on the north side. I started with a little oregano, parsley, basil, thyme, and a single Egyptian Walking Onion. I knew nothing about this plant, Allium proliferum, except what the store tag told me: this onion would “walk” itself around my garden as it grew. I planted it, gave it some compost and water, and let it go.

Well, dear readers, this is what we have today: an enormous shrub of onions, expanding in every direction. Jerry thinks they’re aliens. 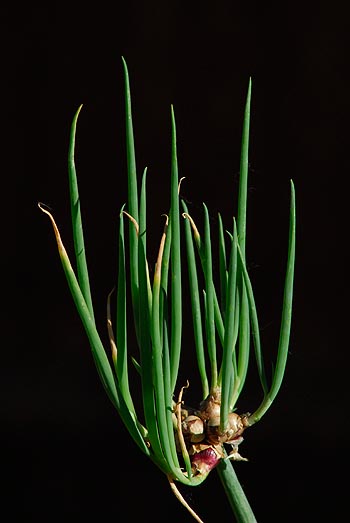 I love the way they form small bulblets atop a hearty stalk. New little onions sprout from the mother below. We sometimes get three generations of onions, all reaching toward the sky, until finally the stalk tumbles beneath so much weight. They’re “walking” now into the neighboring mint, oregano, chives, thyme and Texas tarragon. But it’s not a problem. If the onions walk where I don’t want them, I just pick them up and aim them elsewhere. Most fallen stalks “plant” their new onions atop the soil. It takes months, even years, for the newer onions to dig themselves in. 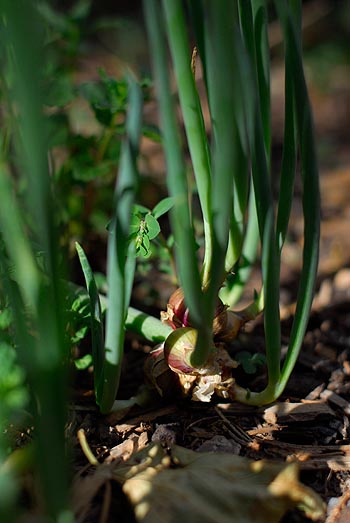 Both bulbs and stalks are edible, though the youngest growths have the sweetest flavor. The biggest stalks are hollow inside, big as bamboo, with a potency that renders them unpalatable. 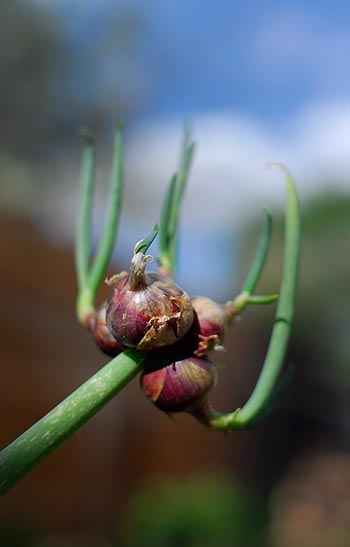 But these little beauties are delicate enough to slice and eat raw, or cook as one would with shallots. 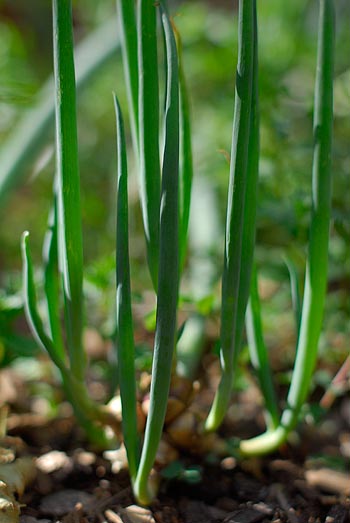 These right here are my favorites. Such tender baby green stalks, slowly walking the garden as they await my plucking and chopping and mixing with fresh greens, tomatoes, a bit of crushed young garlic, a touch of mustard, olive oil, paprika, s&p and—when I’m lucky—wild Alaskan salmon.

8 replies on “The Onions That Walk the Earth”

Agreed–gorgeous light (Jerry) and a lovely article (Karen). It’s been such a delight watching each other’s “projects” evolve these past 2-3 years.

Karen
A great post, I loved growing onions and shallots. What I especially liked was laying them out to dry in the late summer sun before storing in wooden grates for eating through the autumn and winter. A little piece of self sufficiency I suppose.

Dave, thank you on behalf of Mr. Photographer.

Miles, thank you. Self-sufficiency is an important thing.

Wow, fascinating! So they grow upwards, get too heavy, fall, grow another generation, etc, etc?! They must look so bizarre if you really just let them go. But for cooking purposes, what a wonderful thing to grow yourself!

These onions are so unusual I’m gonna have to check around for them.

Valerie, yes, they do look kind of freaky—but lovable. And tasty.

Wizzythestick, do! They’re delightful, especially if you’re looking for something to fill a blank space in your garden.

Wow! Such cool pictures documenting the even cooler process of onion reproduction. I honestly never knew onions did that! Thanks for sharing.