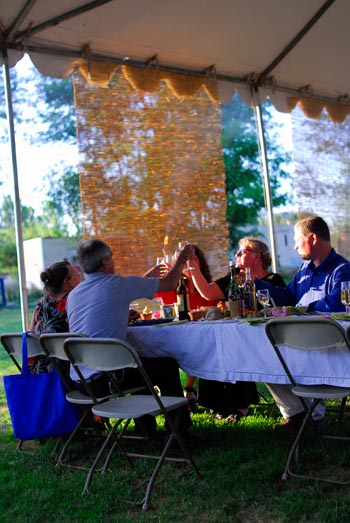 I have a thing about light. Then again, I’m married to a photographer, so that makes sense. In this house, we pay dear and particular attention to light in all its formsâ€”sun, moon, star, candle, incandescent and fluorescent. I’m easily awe-struck by the day’s last rays as they hit the eastern trees across the field behind us. Or the way a full moon rises like a big ball over the amber Isleta hills as I’m driving toward homeâ€”just as it did last week. It’s not unusual for Jerry and me to stop whatever we’re doing, dash to the backyard and simply look at the dusk. I tend to think everyone does that, until I’m in a crowd at the golden hour of evening and realize no one else is mesmerized by the light.

Last weekend, thanks to a pair of food-loving friends (gotta love ’em!) we celebrated the summer solstice, the longest day of light, at “Field to Food.” It was an outdoor community “locavore” dinner, with benefits going toward The Center for Ageless Living in Los Lunas. Quite an interesting placeâ€”a senior center based on the philosophy of sustainability. Beyond the living quarters, you’ll find yoga classes, a day spa, a rotisserie, gray-watered gardens and a field of heirloom tomatoes.

We began with a glass of Milagro Merlot and a colorful cup of beet soup from Amyo Farms: 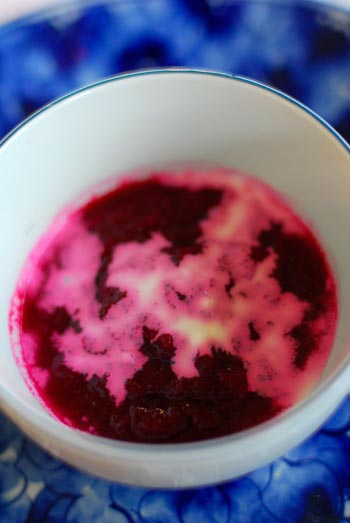 I’m excited about this one. We talked to farmer Jesse’s mother (Jesse was in the field that night) and discovered Amyo sits just a couple of miles down the road from our place. They sell beets, potatoes, greens and eggs. I expect to be calling them soon….

Before we dove into dinner, Val got up and gave a little talk on New Mexico winemaking, the oldest in North America. I’m a firm believer in getting the right advice from the right people when it comes toÂ  wine. Val and I spoke that night about challenges. She’s contemplating what wines might work with a Naga meal.

Almost everything we ate and drank that night was grown or prepared within a 100-mile radius of the Centerâ€”herbed rotisserie chicken, Los Lunas beef, Estancia goat cheese, a salad of local greens, mint iced tea, apple compote. For the wheat-eaters: organic pasta, handmade bread, whole wheat crackers and Belgian waffles prepared by Mariepaule Vermersch, whose family has made these delights for more than one World’s Fair. 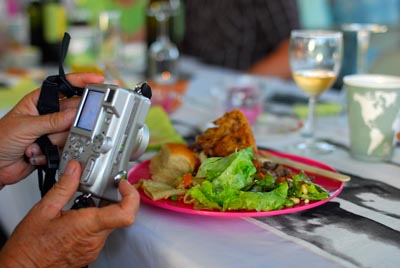 As per Redcoates custom, we closed down the tent, leaving long after the last light had retired. 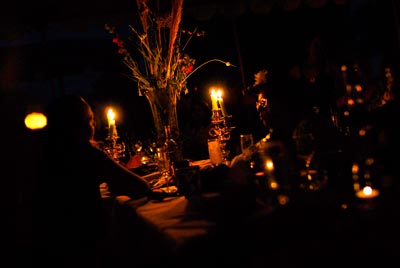 I love this piece, and all the photographs in it. Oh my.

I’m a light fiend as well. I rush out to stare at the last of the golden hour. Danny does this too. We are nothing but rank amateur photographers, but we embrace that light with the camera when we can.

Could I have some of that beet soup, please?

What a great read – it sounds (and looks) like a divine evening. Happy solstice.

Thanks, Shauna. Thanks, Annie. So glad to hear of others out there who are as addicted to light as we are. It always amazes me, too, how different the sun appears to us depending on where we areâ€”the New Mexico desert, a beach on the Equator, a steamy jungle. Same sun, same Earthâ€”but thoroughly different light depending on its filters. That evening was one of those perfectly pleasant summer affairs. After an afternoon of dusty, gusty winds, everything calmed before dinner and the temperature was perfect.

Shauna, wish I had more of the soup.