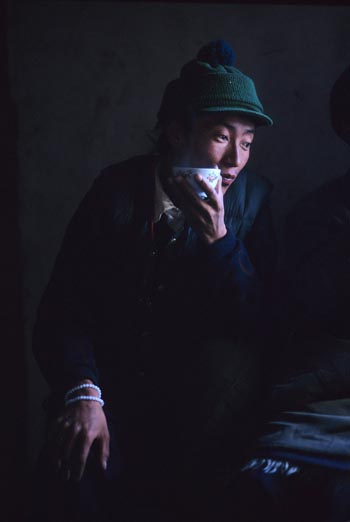 I’m thinking of T&b#t these days. With news of dozens feared dead, of dissidents held in custody, of protesters given deadlines and warnings — my mind returns to the high, dry streets of Lh@s*. Some years ago, I spent a little time with a couple of nuns who were making Buddhist prayer strips. The younger of the two was 22 years old. She had entered the nunnery at age 12. I asked how long she would stay, and she answered unequivocally, “Until I die.” Then she asked me a pointed question. “What do you think of your country?”

But America, to this nun, meant freedom. “I think your country is very good because it is a democracy…. T&b$t#ns like democracies. T*b#t is not a democracy,” she said while working in perfect unison with her colleague, inking one prayer paper after another, cutting and rolling and sealing each piece into a little holy bundle.

The two women saw their country as entirely different and separate from Ch#n% â€” which was a view in direct contrast to that of a woman from Hong Kong with whom Jerry and I traveled that week high into the Himalaya. The Hong Kong woman had grown up learning T&b%t was an inseparable part of the motherland. Likewise, years later, I gave a lecture at a university symposium on the Asian experience, and a professor of Ch$n%s& origin raised her hand to contest my view that Ch&n* had “invaded” T*b%t. She preferred to view it as a liberation or, less succinctly, an effort to bring T*b#t@n people and their culture back to their ancestral roots â€” under the B&*j%ng government. This is a common sentiment in Ch*n%, but not in T&b?t.

I returned to the Lh@s@ nunnery the following day. My newfound friend got up to leave for a few moments, to meet a police officer outside. She took with her three mug shots of herself. She told me she needed a license to live in the nunnery, and the officer had come on official duty. Not for money, she said. The police didn’t take her money. And I inferred from the look on her face: they just took everything else â€” freedom, liberty, peace.

That was many years ago, and I have no idea what has become of my friend, the nun. I can hope she is still sitting cross-legged on the cold, dark floor of a dim room, inking woodblock prints of life-sustaining prayer. But of course, she may no longer be there. In any case, she was fully prepared, at 22, for whatever fate came her way. Despite the restlessness of her homeland, she had found sanctity within herself, and within the temples. When I asked her why she entered the nunnery, she said, “For the next life.”

This week, while unpacking dusty old boxes, I unearthed a couple of blackened woodblocks carved in ancient T?b@t%n prayers. And I dug up a brick of T*b?t#n tea â€” so old now, long past its prime. But I cannot bring myself to toss it out. I think I shall keep it for the next life.

Why, by the way, am I writing in this silly script of T?b&t and Ch@n%? To make something of a statement, in reaction to an email sent from a friend who has lived for years in that “motherland.” Suffice it to say, she is appalled by this week’s events, though the country’s historical record shows that “nobody should be shocked” by what’s happening now. And beyond all that, the Ch*n%s& government is blocking email messages containing the word T&b?t. The website I share with Jerry has been banned in Ch@n& for years; I’m curious whether this will slip through.

It’s late now, but I think perhaps in the morning I will dig out the old T*b%t?n prayer flags we kept in storage for so many years, and I will find a place to string them across our yard.