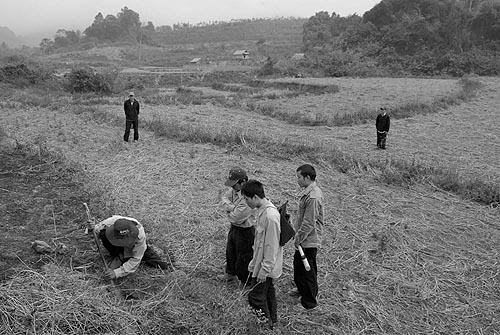 Members of a Phoenix Clearance Ltd. bomb clearance group, led by American Jim Harris, search for unexploded ordnance (UXO) in a dry rice field in the northern province of Phongsali.

Laos is having its 15 minutes this week. As hundreds of foreigners gather in the capital for the First Meeting of States Parties to the Convention on Cluster Munitions, stories of unexploded bombs are pouring forth. And yet, it’s but a trickle considering the issue’s gravity. If you’ve followed Rambling Spoon for a while, you know this. You know that old American bombs still devastate Laotian farmers and their families. You know that bombs, on average, kill or injure one person almost every day in Laos.

But allow me my soapbox one more time, as I post a few more photos from our most recent trip this year. We initially accompanied American Jim Harris and his bomb clearance team through the northern village of Sophoon in Phongsali province. Harris is the only American working on the ground in Laos to clear the bombs his country dropped nearly 40 years ago. Ironically, Phongsali had never before had bomb clearance because the province wasn’t contaminated heavily enough to garner the sort of funding it takes to clear the Earth.

But as you can see, the bombs were there, threatening farmers and their food supply.

Since I’ve begun my Scripps Fellowship, many people have asked me what “food security” means. In the broadest sense, it means everyone has access to enough safe, healthy food. How do bombs threaten Lao food security? So many ways. Farmers fear their own fields. It’s dangerous to dig in land contaminated with bombs. At current clearance rates, it will take hundreds, if not thousands, of years to rid the country of all that danger. When UXO kills farmers, the families are left to fend for themselves. When UXO leaves farmers disabled, the families often abandon their village homes, move to a city and seek work off the farm. People start shopping in the markets. They require an income. If they don’t have money, they don’t eat.

American bombs have killed and hurt more than 20,000 people in Laos since the end of war. Every province is contaminated, as are more than 25 percent of all villages. What can we do? We can start by talking about this problem because, all too often, we find people who don’t know. We met a Hmong guide a few months ago who had taken an American tourist to see a vast crater left by a 2,000-pound or 3,000-pound bomb. The tourist thanked him and said he’d never learned a thing about Laos in school.

But in nearly 40 years since war, Laotians have learned a lot about the United States. 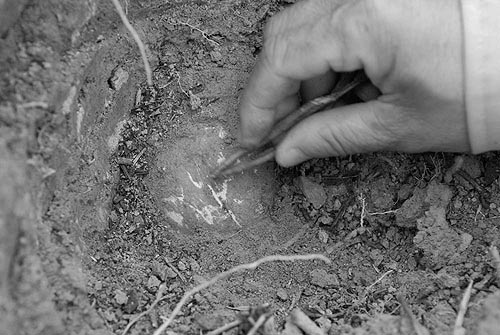 A bomb clearance expert scratches the surface of a bomblet found in a doctor’s rice field on the edge of Sophoon village in Phongsali province. 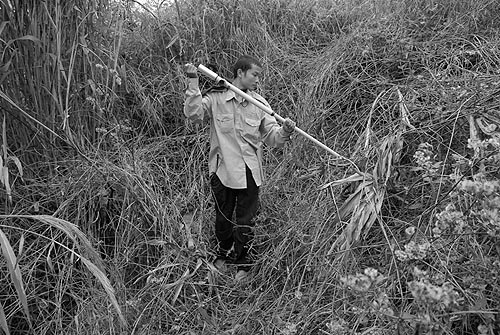 A PCL team member searches through brush, following the lead of a villager who had reported seeing unexploded ordnance (UXO) in the area. The bomb was not found. 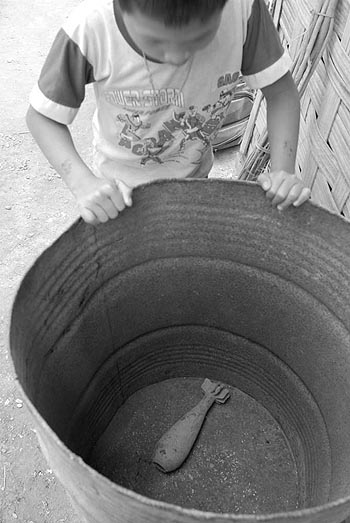 A child in Sophoon village gazes at a mortar found by a relative in a nearby rice field.