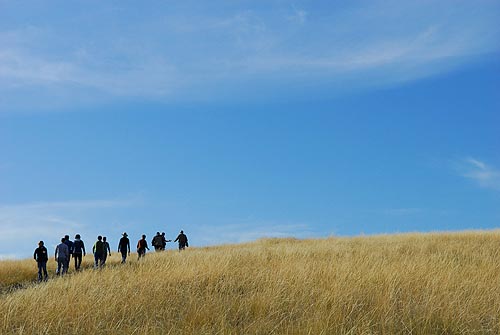 The wide sky stretches across the Earth—from parched canyons and amber hills to the craggy tips of the mountains that make the West. This West. Our West. A land that swaddles me in its hugeness.

That is what I saw and felt for the 2 1/2 days it took to drive from Boulder to Missoula and back. Sandwiched between was an animated week among hundreds of journalists gathered for the 20th anniversary Society of Environmental Journalists conference. Immediately preceding that: the Forum on Atlantic Media and the Environment (FAME). Several readers commented that I haven’t posted here in a while, and it’s true. It’s funny how little, at times, a blog reflects reality: I’ve been quiet online, yet my life has been anything but. Back-to-back panels and parties, mountain hikes and brown-bag lunches. No moment to rest.

I learned a ton last week. I learned about Diana Six and her research on bark beetles, fungi and the unfortunate deaths of so many Montana trees. I also learned that this extraordinary woman, when given the time, will brew her own beer using beetle yeast – how cool is that!

I learned that Montana is losing its trout, and experts estimate up to a 50-percent loss by the end of this century. Temperatures are rising, snowfall is diminishing, and the snowpack is melting earlier each spring. By late summer, the rivers run low and dry. “We already have a 30-50 year trend of slow warming here,” says UM’s Nobel laureate climate researcher Steve Running. “So we’re in the middle of climate change.” He says the Rockies are “slowly getting more arid as we go through time,” and the West faces the potential for “holocaust-level fire.” 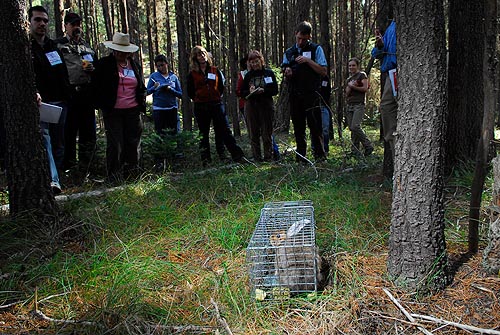 This snowshoe hare is turning white before the winter snows begin to fall.

I admit I got a little teary-eyed when I learned that snowshoe hares, such as this cutie above, still turn white when daylight grows shorter. But the snow doesn’t come, and the animal’s natural camouflage defenses are defeated.

I learned from Laurie Mazur that the average Tanzanian emits 1/10 of a ton of carbon each year, while the average American emits 1/10 of a ton of carbon every 28 hours. “When we use the word overpopulation, we’re implying there’s simply too many people for the resources available,” she says. But we must consider the waste involved in resource use. If everyone on Earth at as Americans on average do, current food supplies would feed 2.5 billion people. That’s a fair bit short of the world’s population at 6.8 billion.

I learned, Sunday morning, that it’s pretty groovy to breakfast with the voices of William Kittredge, David James Duncan and Kathleen Dean Moore (even when it’s early and you are slightly hung over). Much of the conversation centered on the overarching theme of climate, society and the future. “Most privileged society in the history of the world. Us. Right here, sitting in this room, you know. What do we do?” Kittredge asked. Perhaps the morning’s most memorable quote came from Moore. “If the definition of insanity is the inability to distinguish right from wrong, then corporations are psychopathic.”

Beyond all that, I learned last week that Missoula is doing amazing things in food—way beyond anything I had conceived when I attended UM as an undergrad. The city has an elaborate system of community farms that help feed the underprivileged and homeless, and the UM Farm to College Program has students across campus eating local. Author Jeremy Smith has just published a book on Missoula’s food revolution. And that’s all I’m going to say—for now. But don’t get me wrong: I’m not done with Missoula. It’s the sort of place I’ll never get out of my heart. 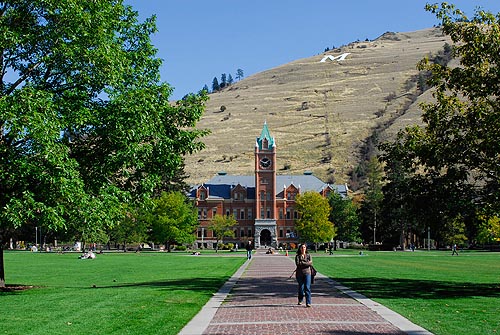 The Oval, Main Hall and the M

10 thoughts on “A Meeting of Great Minds in Missoula”