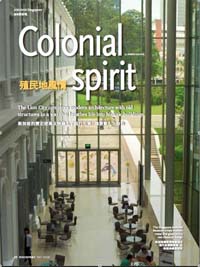 FYI, if you happen to fly Cathay Pacific this month, we have a story in the inflight magazine, Discovery, on hip Singapore venues that blend old colonial architecture with sleek, modern design. To name a couple: the National Museum and the uber-popular shops and restaurants of Dempsey Hill.

I think Singapore gets a bum rap for having destroyed remnants of its vibrant past. But really, it has retained far more of its historical architecture than most cities in the region. Take a stroll and look around; Singapore far surpasses the concrete jumbles that dominate much of urban Southeast Asia. Plus, honestly, most historians will tell you that a “vibrant past” was also a stinky oneâ€”and an inefficient, unsustainable one. Just read about the days when the city’s streets buzzed with vendors and the waterways clogged with pollution. Some people lament the loss of open vending. But back then, the lifeblood of the cityâ€”its waterâ€”was unusable. Singapore relied on Malaysia for its water. Not so now. Decades of clean-up efforts have turned this city around. In the future: look for more waterside parks, boardwalks, kayaks and other ways Singaporeans integrate clean water into their daily lives.

No, I don’t quite understand the disparaging remarks about a modern Singapore. But more on that another day….

8 replies on “Singapore, Old and New”

Karen,
Singapore is one of my favourite Asian destinations, despite the modern buildings there are still some really lovely places to visit. I think it is a good way of introducing Asia to the first time traveller who might not be quite ready for some of the destinations you visit.
There are some fantastic converted tea houses to stay in which make a welcome respite from the huge hotels.
Miles

Miles, I think you’re right. Plus, I’ve had some spectacularly memorable meals in Singapore – on the street, as well as in the fanciest of restaurants. You can spend $2 or $200 in Singapore and walk away with a happy belly and a memory you will never forget!

Karen,
The food is more often than not quite sublime and a real melting pot, the food courts seem to offer everything from Bangkok to Korea and it’s all delicious. I don’t know about you but whenever I have travelled in the region the cheaper food has always been better than the top end five star stuff. Maybe it’s because the chefs try too hard to emulate a three star restaurant in France, I wish they wouldn’t because their food heritage is just as rich and diverse as any European or American one.
That said, I will never forget afternoon tea at the Mandarin Oriental in Singapore, a choice of over one hundred teas with the style of service so reminiscent of a country house hotel in England it made me think I was back at work!!
Miles

I enjoy reading your food travels. It is the food that really stands out when I remember our time in Singapore. Especially the Malay and Indian places. Now, in Hawaii I’m able to grow the fruits and spices myself for their cuisines. Today, the scent of cashew apple as I was bottling some wine I made, made me think of durian – not that strong or the same at all, but unusual. And, the taste comes through as well.

Miles, in general, I agree with you 100 percent on the cheap street food. But I’m continually blown away by a few amazing exceptions. Next time you feel like going all out, try Si Bon, http://www.gourmet.com/restaurants/2007/11/firsttaste_sibon.

Hmm, next trip, I’ll have to stop in for afternoon tea at the Oriental!

Thanks, Claudia! I’m envious of your Hawaiian locale. Don’t get me wrong, I love this plot of land we have in New Mexico. And we’re filling it with native plants and trees that have grown in the Rio Grande for centuries. But a little bamboo would be nice! And a neem tree. And maybe some passionfruit….

I have never been a huge fan of durian, but for some reason I had a plate of it for breakfast last year in Singapore and really enjoyed it. Something about that particular durian struck me in a good way that day.

and Happy New Year to you and Singapore!

[…] around the time Jerry and I ate our Gunther’s lunch, we worked on an article about Singapore heritage and the many ways architects and artists have combined the island-state’s history with new […]