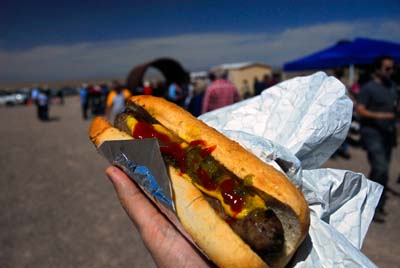 Under ordinary circumstances this New Mexican brat, eaten at about 5,000 feet, would be less radioactive than a brat in Denver or Quito or Lhasa because our exposure to cosmic radiation increases the higher we go. But this brat is special.

This brat was sold beside cheeseburgers, chips and hotdogs last Saturday at the Trinity Site where, on July 16, 1945, the Manhattan Project secretly tested the world’s first atomic bomb. When windows shattered 120 miles away, the US Army said a munitions shed had accidentally exploded at Alamogordo. Not until after the bomb was dropped over Hiroshima, three weeks later, did President Truman explain what had happened in this remote, dusty expanse of New Mexican desert.

The Trinity Site, within the White Sands Missile Range, is normally off limits to visitors. But twice a year, for six hours at a time, the military opens the gates and thousands of people from around the world flock to this eerie, windy, contaminated land. It doesn’t necessarily look like much unusualâ€”cacti spread their prickly arms across the desert, and dust devils stir in springtime winds. The site offers little to see beyond a small lava monument marking Ground Zero (the original Ground Zero); and the McDonald ranch house, an old adobe home that was “acquired” for the assemblage of the bomb core. The thick-walled house with wood-plank floors had sheltered remote farmers who lived without electricity, cut ice from the water tanks in wintertime and kept a charcoal filter atop their house for collecting and purifying rainwater. They lived an isolated, hard-working life. And then the ranch became famous.

The bomb was detonated atop a 100-foot steel tower two miles from the ranch. The explosion sucked great quantities of sand into its fireball. The intense heat melted the sand, which fell back to earth as green glass-like particles called Trinitite. Most of the remnants have been removed or bulldozed and mixed with sand. But you still find tiny pieces, scattered around Ground Zero. 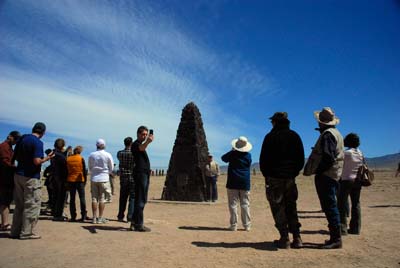 The US government says a one-hour visit to Trinity results in radiation exposure much less than that of a cross-country airplane ride or a chest X-ray. It’s about as much radiation as an American might get watching TV in a year. I’m not overly concerned, though I am slightly second-guessing my decision to pick up a piece of trinitite with bare hands. Trinitite is an alpha and beta particle emitter. Well… it was a small piece and I didn’t hold it very long. But in retrospect, it was a kind of stupid thing to do.

Visiting Trinity, however, I do recommend. It’s a weird but informative and thought-provoking historical excursion. Curious? Check out the next public opening on the first Saturday of October. 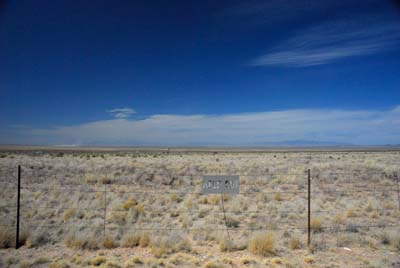 Karen,
A very interesting read and only you could get a story from a roadside burger van! What was the ‘brat’ like? it looks like it’s taken a radioactive hit itself. I’ve been on a guilt trip for two days after eating two burgers which I’m not proud of or would readily admit to anyone who knows me but you’ve made me feel better. That said I really wouldn’t know how to blog that one-that’s why you’re the writer and I’m the chef!

Jerry ate the brat (American slang for Bratwurst). Jerry got a gut-ache because there was no cheap beer to wash the brat down his gullet (proper American brat-eating technique). Still, Jerry would do it again, because how often do you get to flavor your food with crunchy, radioactive dust? Jerry doesn’t usually talk of himself in the third person.
-Jerry

Jerry,
Nice one! You should market that ‘crunchy, radioactive dust’ to all of those molecular gastronomy nuts out there-they could use it to flavour their ‘parmesan air’-make the most of it before the craze wears off (I live in hope)

Nice post! It twas a strange place…beautiful surroundings tho. It made me think about how brilliant humanity can be, and how destructive….

Jerry,
Crunchy radioactive dust.. anything like those crunchy paper straws that Karen ate… i.e tarantulas.. Guess I’ll have to over for a bite ‘o dust…
Andy

Really, really interesting. It’s seems kinda weird to be eating at the former site of a nuclear bomb. It doesn’t seem as though anyone died there, though. It just reminds me of the weird mess of tourists visiting ground zero in my home of new york city. for someone who live thru 9/11, I always found it very uncomfortable and bizarre to see people (mainly tourists) who are smiling and eating hot dogs while taking pictures in front of a burial ground that is Ground Zero.

Yes, the whole scene is rather strange, but I found it not nearly as somber as Ground Zero. Despite the picture taking, smiling faces and sunny sky, I felt like the 9/11 site was smothered in a dark pall. I couldn’t walk through there without tears. Trinity just felt eerie, but I’m sure that’s largely because the killing took place thousands of miles away. It inspired more philosophical thought than gut-reaction emotions in me.