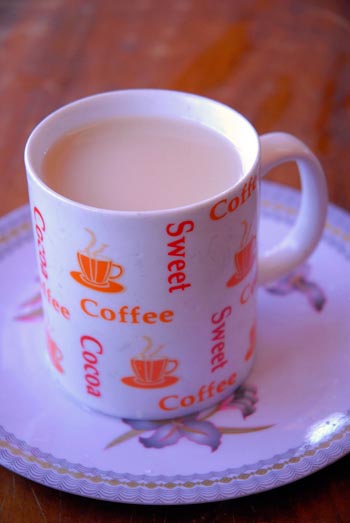 (Nope. This has nothing to do with coffee, cocoa or steaming-hot drinks.)

I’m trying to clear the decks, as Jerry likes to say. In recent weeks and months and years, I have accumulated an enormous stash of stories that sit unfinished on my laptop (even un-begun, in my mind). Because life is the craze it is, only in stolen momentsâ€”between deadlines and airplanes and dinners and bike rides and classes and mountain hikesâ€”do I return to those thoughts.

Well, I’m trying to clear the decks. And so periodically, in this space, I will take you to places we visited forever ago.

Like Sikkim. In winter. When the sun shone but the wind howled and nights grew frigid, and we sat beside fires until our toes turned warm.

We attended a Sikkim celebration, high in the little Himalayan town of Pelling. Not so much a town as a spot on the road, popular among visitors from next-door West Bengal. People gather to gaze at the mountains, which rise like majesties across the valley. Up until 1975, Sikkim had been an independent Buddhist kingdom (with monasteries not unlike those in Tibet). I remember our hike to the Pemayangtse Monastery, whose road was lined with large white flags on green poles. A sign at the top of the hill noted the flags’ dedication to all innocent victims of “negative forces”â€”to the victims of the Madrid train blast and the Iran earthquake; to Sergio de Mello and Anna Lindh; to the victims of genocide, ethnic cleansing and mass murder in Rwanda, Nigeria, Zimbabwe, Yugoslavia, Serbia, Haiti, Liberia…and elsewhere. The place gave pause.

Now Sikkim is a part of India, though the Sikkimese retain a unique cultural identity. But they’re kind of a quiet, peaceful people way up there in the mountains, in a region not so well-known, which is why the local government organized this celebration: to promote everything wondrous about Sikkim.

What is chang (also spelled chhaang)? It’s the local fermented firewater, made from rice, wheat, corn, oats, barley or millet, as this one is. (Did you know that in the United States, most millet is used as birdseed? Now why would you take a perfectly good alcohol crop and feed it to the birds?)

It was a crisp, clear day with Kangchendzonga beaming in the distance. We wandered the food stalls at the Sikkim fair, nibbling here and there, until we happened upon the Darap Restaurant serving the brew. I asked a young man working in the stall, “Can we have a chang?”

“Why not!” he replied with conviction, telling us a couple of women would have to make it.

“Can we watch them make the chang?”

“Why not!” he exclaimed again.

And so he showed us a rice sack full of fermenting millet. “It takes time,” the young man said. In the back room, the women pulled pearly red grains from a bag… 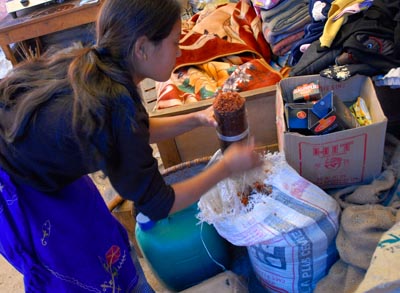 …and slushed them around in a basin of steaming boiled water… 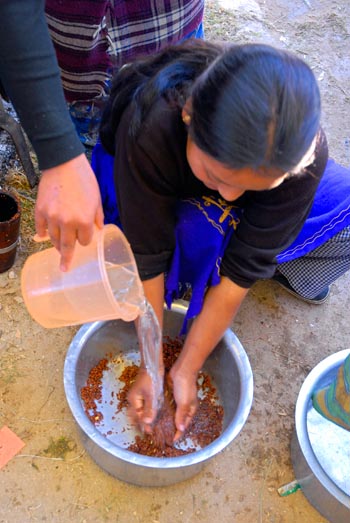 …using bare hands. Then they poured the mixture into a jute bag… 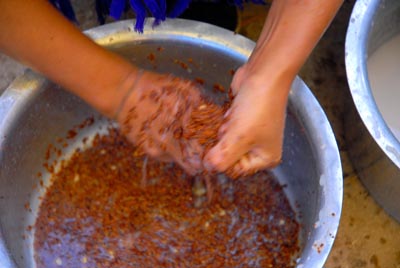 …and squeezed and squeezed as milky-white chang drained into a pot, already cooled by the chilly mountain air. 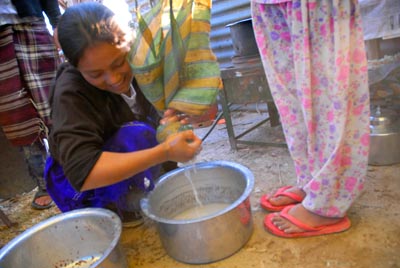 Their little kitchen alcove filled with powerful, alcoholic smells. The young man led us to a restaurant table, and we sat to a couple of coffee mugs filled with this creamy brew. It was lighter and sweeter than other changs I had had. It tasted earthy and healthy. 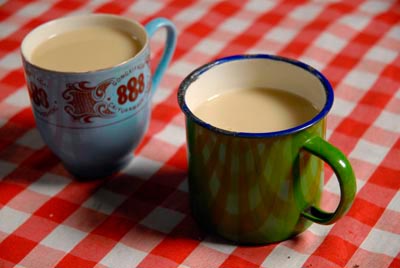 7 thoughts on “Why Not Chang!”