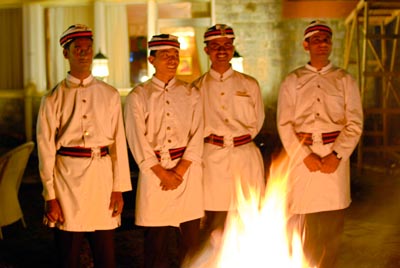 Peace and happiness, everyone. We shall spend our holidays in northern Thailand this year. But let me tell you about last year’s festivities:

After years of seeking something of a real Christmas spirit in Asia, we unexpectedly find it in Pelling. No scantily clad bar girls in Santa hats, no beer-bellied boors. Just a mountain, a bonfire and a group of travelersâ€”a couple of families from Kolkata; and a woman from Fremont, California, visiting a sister in West Bengal.

The evening begins with a beautiful young girl and her refined voice. She takes us throughÂ  “Jingle Bells” and “Go Tell it on the Mountain.” Then a Bengali man leads us on a musical journey beginning with the sounds of Rabindranath Tagore, followed by an old Hindi love song about his wifeâ€™s eyes, then the Billy Joel equivalent, and finally a conversation on an ancient Hindi musical formâ€”which he has studied and can sing in perfect pitch. It’s a beautiful song on a stellar night.

The fires is warmâ€”hot, evenâ€”as a Gurkha guard uses his knife to cut branches for the blaze. We sip cherry brandy from crystal cordials. We nibble on fish and paneer pakoras. Then at 10 p.m., our small crowd heads inside for Christmas Eve dinner. Each plate is garnished with a whistle and a cracker, British style. A Christmas tree blinks its lights by the door. For a few hours, we feel the warmth and camaraderie of a small world. Even the unruly boys who awaken us in the wee hours with their unrelenting screaming and tramping aboutâ€”this night, they sit silently by the fire amid the holiday cheer.

This hotel, The Elgin, is nowhere else in our experience of India. Aside from the rambunctious children, The Elgin is an oasis of clean, quiet and peace.

I like the sofa beside a picture window in the lobby. I gaze at Kangchendzonga closer and clearer a view than any, save those along trekking trails. In afternoon, I can sit here and take tea (with cake if I were the cake-eating type). In evening, cocktails. The rooms come with breakfast or a full meal plan, served as buffetsâ€”but decent buffets. Continental fare is widely available, but Iâ€™m more interested in the Zeera rice, Indian pickle, butter dal fry, Kashmiri alu dum, palak paneer, onion pakoras, chicken curry, Kerala fish.

Itâ€™s a long way for fishâ€”and visitorsâ€”to come. Sikkim has no airport (although the government approved one this year). The closest sits five hours down the mountains in neighboring West Bengal. One must want to visit Sikkim to visit Sikkim, but that is this stateâ€™s greatest appeal. And for all the views that Pelling touts, most are obstructed by the sullied truths of developmentâ€”leaking water pipes, half finished concrete constructions, sewage runoff, rooftop water tanks, laundry lines, shacks and ramshackle shops. The Elgin, atop this serene hill, shares its world with nothing but the Pemayangtse Monastery the next hump over. 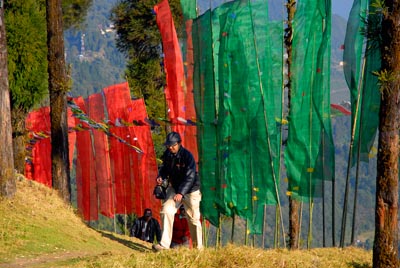 This is a land of heights, and monasteries on them. By day, we tour theÂ  Sangngak Choling (or Sanga Choeling), the second oldest in Sikkim, founded in the late 1600s. Wind-whipped prayer flags soak up the winter sun.

Downhill, a party converges in Pelling central (ha!), where the government has organized a cultural festival in hopes of promoting tourism. We sample the food. I try a millet roti, heated in butter. It’s a thick, dense chocolate-colored disc, the sort of thing to eat before scaling a mountain. It stays with me awhile. 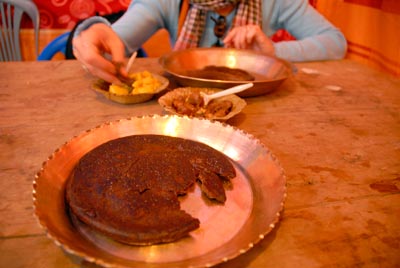 Another stall offers sticky-rice balls with coconut shavings and cardamomâ€”yum. But my favorite is the buckwheat pancake rolled and stuffed with chopped green vegetable. (Notice, by the way, that nothing I’ve mentioned here contains gluten.) 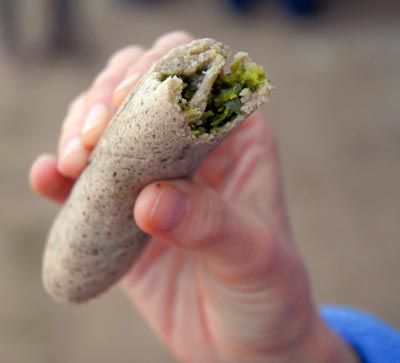 And that’s when we find the chang, at a neighboring stall.

The sun sets early, and with it, cold. It’s time for that fire at the Elgin, and a nip of cherry brandy.

(Another day, I will have to tell you about our retreat from Sikkim on a bus from Hades that perfectly quells all loveliness found here. But not now. Nowâ€”go and have a merry holiday.)