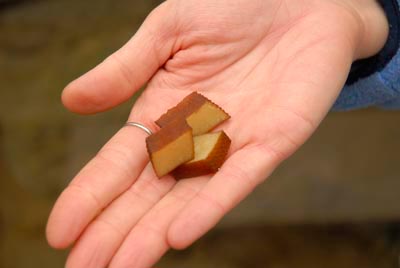 And what is this? It’s cheese. (Bonus to anyone who names the movie.) It’s hard yak cheese, dried over a kitchen fire, cured for six months, then chopped into cubes. It’s my first taste of Nepal at the Lamaydhura Tea House, a little shop that straddles the border, not far from an outpost called Meghma.

This is some hard stuff, folks. It tastes a bit like smoked wax, and it takes a good three or four minutes to extract further flavor from the cube. Basically, it gives the mouth something to do while lugging firewood up and down these mountains — as all the children do.

Yak is pivotal to the Himalayan diet and lifestyle, and it’s key to the economy as well. If you want to know just how much Nepalis and Tibetans rely on their furry friends, FAO has posted a detailed report on the ubiquitous use of yak. The report notes that Nepal produces 176 tons of yak cheese each year (using somewhat outdated figures), mainly for tourists. But this cheese, we found, was a hit among everyone on the trail. 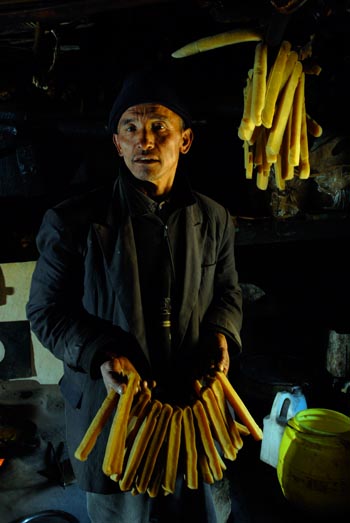 A man named Pemba Sherpa holds his cheese by the fire.

Indeed, Jer, you’ve always been good, but the photos have been simply awesome lately!

illustrating how ingeniously people will use the resources at hand. I sense some kinship between this approach to food–relying on the yak–and that of the eskimos, who manage a diet around the seal.

yak snack — my husb’s schoolmate came from dimapur to visit and shared some with my family. it took one family member over 3 hrs to chew down a half inch square, me — over an hour. our dimapur friend — under five mins! those suckers are harder than hard candy! * had plans to head over there to visit in april 08 … which will be delayed, but your pics make me look forward to the day we can go! thanks again for the beautiful pictures!

Mr. Photographer thanks you for the compliments.

Ed, while most nomads go lower during the freezing winter months, there is a tribe in northern Sikkim that follows its yaks up beyond 16,000 feet. That’s dedication! The yak is so sacred, such a resource, the people go to it.

cds, I think the yak-fueled diet, rich in butter and cheese, makes for strong teeth! I understand April is the month to see those hills — covered in rhododendron blossoms. But the landscape is stunning, no matter the season.

[…] where three men sit beside a bright blue wooden table. A fire burns in an earthen stove, and 8-inch lengths of hard cheese hang from the rafters. Beyond the kitchen is another room, visible through two tiny glass windows. […]

[…] Yak cheese “Itâ€™s hard yak cheese, dried over a kitchen fire, cured for six months, then chopped into cubes . . .Â  This is some hard stuff, folks. It tastes a bit like smoked wax, and it takes a good three or four minutes to extract further flavor from the cube. Basically, it gives the mouth something to do while lugging firewood up and down these mountains â€” as all the children do,” says Karen in her post A Bit of Yak in the Hand. […]