The colorful houses of Kohima

Nagaland sits in the far northeastern corner of India, near Burma. It is a state, but by all practical purposes it should be a country. That is what the people have struggled for in the past half-century. Nagas do not look or live or eat or talk or worship or behave like Indians. They originated in Southeast Asia; their roots are apparent. Sixteen different tribes inhabit this land, where the people loosely share a culture but speak different languages. For the sake of convenience, English has been made the official tongue.

The Nagas build their villages on the tops of steep mountains that plunge to green valleys and terraced rice fields. These fertile hills grow 40 types of rice and all manner of organic fruits and vegetables. It was a heart-healthy week just getting from one house to the next, or to the square lookouts that every village has for simply gathering, drinking tea or rice beer, and gazing at the world.

Itâ€™s no wonder the Nagas have fought so long for this land. The old-time warriors were known for their valor in battles that involved taking the enemyâ€™s head. That stopped decades ago; today most Nagas are Christians, mainly American Baptist or Catholic.

And today, the fight is mainly with the Indian government. For this reason, the streets of Kohima, the capital, resemble those of other Northeast states, with soldiers always on the lookout, battalions stationed on hilltops and military caravans rumbling through towns. But these are conflicts that donâ€™t involve foreigners, and the Nagas we met were unfailingly kind, inviting us into their kitchens for tea and tastes of their food (more on that to come, of course). 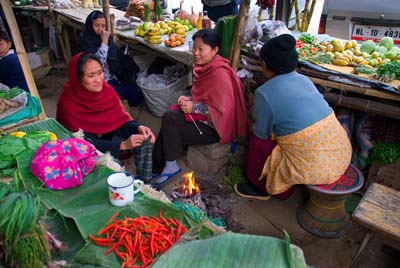 Naga women keep warm by a fire in a Kohima market

One thought on “Eastward and Upward”