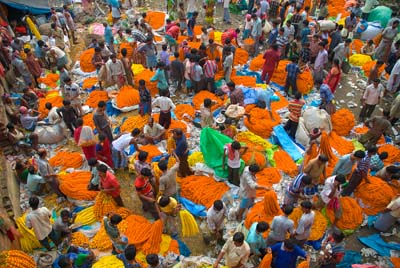 I have never before struggled so much for words. Accurate words, fitting words. After a day of traipsing the streets, I sit alone on a vast king-sized bed. Itâ€™s quiet inside, but the noise persists outside my window. I have showered, I still stink, my nose blows pure black. Yet my heart slows and a restfulness eases into my bones.

It is madness out there. And yet people are unfailingly friendly. Of the thousands we pass in a minute or two, rarely does one scowl, insult, or â€œspeak with angry teethâ€ (one of my favorite phrases, spoken by a Khmer friend). And there are indeed thousands passed every minute, in a rush of human beings so forceful a person could be trampled if she stops. That is, unless she lies on the pavement, as hundreds do, asleep, motionless, sprawled on filthy ground as porters breeze past with cargo on their heads, and the upper classes mosey with shopping bags in hand, and the dogs and kids and taxis and rickshaws and bicycle carts all keep their frenetic pace. Nothing stops. But the masses part ways around those sleeping â€“ sleeping! â€“ amid a zoo of noise.

The human river flows up the stairs and over the Howrah Bridge, acres of people traffic left and right, only inches of room to pause for a quick look over the edge and into the cloudy waters where boats charter yet more people back and forth; and barges await loads of who knows what for who knows where; and the crows zigzag the air between two banks; and higher still, hawks circle this fecund earth.

Across the way is a flower market. Down, down, down we pad the steps, then halt in our tracks amid yet another cacophony of color and life; of marigold mounds and people selling them; of space so tight that humans must grab each other when trucks roll through. Up and down go the hillocks of orange and yellow flowers; all around go the feet and bodies. A hole is cut into the brick wall separating this chaos from the railroad tracks, whose stench seeps into the flowers. Through the hole is where men go to pee on piles of garbage. 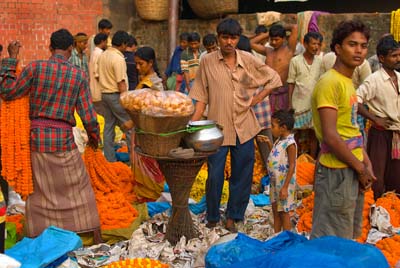 A man in the middle of this muddle sells snacks. See him in the picture above? Itâ€™s panipuri, or puchka as it is called . Itâ€™s a wheat and semolina dough ball that has been fried, puffed and hollowed out. The center is filled with mashed potatoes mixed with black salt, roasted cumin and red chili; then doused in water with tamarind (or green mango or lemon) with masala spices. Just a few hours after setting foot in Kolkata, a street vendor offered me a sample of his puchka. He called it â€œIndian water ball,â€ and shoved it into my hands, insisting I try. Even Indians eat with caution; the water in puchka is not always clean. And you know my problems with wheat. But it was my first day, I partook, and it was delicious.

The puchka seller at the flower market? I never get up next to him. I canâ€™t weasel my way through the crowds to get an up-close view.

So many people. Across the tracks lies an intersection that clogs at rush hour with buses, trams, trucks, taxis, rickshaws and human runners whose work it is to shuffle goods atop their heads from one point to another. Donâ€™t stop in the road here, nor on the sidewalk, nor in the gutter. The porters move faster than stalled traffic, jogging on bare burly feet, toting bamboo baskets of potatoes. Other men lug heavy carts across the road â€“ running, running, all day long.

Most of humanity here has no toilet, no home with water, and so they gather by the dozens, by the hundreds, on street corners where public pumps pour forth, and men lather their bodies while crouching in the fetid gutters. Others immerse their bodies in the , the same river that carries the detritus of 15 million people. These are ancient habits, born long before diesel fuel, oil slicks, chemical waste and people in such great masses. But Kolkatans carry forth, living largely as they have for generations, with little changed but their sheer numbers. Fifteen million and counting.

How? Sometimes I can’t fathom how such humanity survives.

exhilarating yet terrifying. I admit I cringe just reading this, and imagining myself as one of these people you describe is a perfect nightmare. we are so distant from the way so many people live. still, I am in awe: how do they do this?

Ed, on the other hand, many Asians I know cringe at the sort of solitude we thoroughly enjoy. Sleeping alone? Their worst nightmare. I’ve thought about that a lot since arriving in India. I imagine many people here would be terrified to spend time in our giant New Mexico yard. Or worse: hiking through the state’s vast open terrain.

i am asian, and have experienced similar scenarios in some areas of my country. still, i could not help but cringe at some of the things you described, particularly on how little the kolkatans seem to regard hygiene.

but that’s just the beauty of it, don’t you think; otherwise, there will be little to be awed about in the world, or perhaps little incentive to explore strange cultures and places.

i like the way you describe these places and people and their food and way of life. your photos are great, but not necessary, as you really bring out the “color” of the place merely through your words.

Leah, thanks for visiting and for such compliments. I am far from Kolkata now, in Assam, and soon beyond that. As for beauty and awe in this world: so true. Kolkata, and all that it is, wowed me in all sorts of ways. But I found the antithesis in the past three days in Kaziranga National Park, where rhinos, buffalo, elephants, deer and rare birds all meet in vast grasslands. Incredible. It’s hard to think of other places so dissimilar — Kolkata and Kaziranga. Yet both intrigued me endlessly.