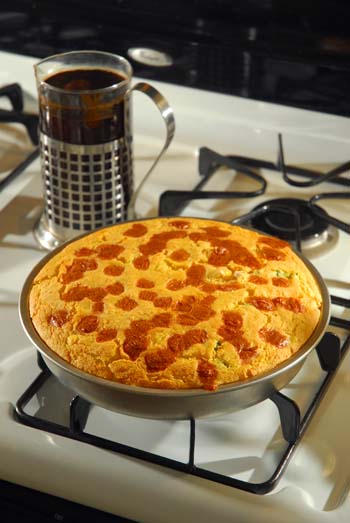 My husband must like me because he makes me a lot of cornbread. Since moving Southwest, we’ve exchanged a fair bit of rice for a tidy sum of corn (that will change soon, as we depart again for Asia). Since I don’t eat wheat, and Jerry has determined he feels better without it as well, breakfast is always a question. On the road in Asia, it’s easy: give us a bowl of noodle soup or sticky rice with grilled chicken, and we’re sated. At home in Chiang Mai, fruit and yogurt frequently did the trick. That works here, too. But during our house renovation phase, on days of breaking tile, tearing up carpeting, hauling drywall, pounding nails and lifting excruciating loads, a little fruit and yogurt didn’t cut it. We needed more. We needed corn.

I think Jerry rather enjoys the experimentation. He has fiddled with a number of recipes, making sweet bread and savory bread; cornbread topped with blackberry syrup, cornbread with butter and honey. By far the winner is his jalapeno-cheese cornbread, pictured above: crispy cheese on top, moist swirls of cheese within and just the right amount of heat from the chopped jalapenos (which, my brother from Wisconsin informed us, are much hotter than the bland, dumbed-down jalapenos sold these days in markets up north).

So I give you Jerry’s jalapeno cornbread recipe:

Pre-heat oven to 400 degrees. Chop small and fry together the jalapenos and onions in some of the butter. Cook until the onions soften and just start to turn translucent (NOT carmelized – they will cook more in the baking). Melt the rest of the butter in the heated pan when done.

Lightly mix that together with corn meal, eggs, salt and yogurt/milk/soy in an appropriately sized mixing bowl (thorough mixing is not required, and in some quarters is highly discouraged).

Grease a 9-inch baking tin (most recipes call for square, ours is round and works fine) and pour in the mixed ingredients.

Sprinkle crumbled or small-chopped bits of cheese across the top (some will sink to the middle of the mixture) and pop the pan in the oven.

Cook for 30-45 minutes. The cooking time varies based on the yogurt/soy/milk combination used and your baking elevation (we’re at 5,000 feet, so we use a little more liquid and our cooking times are longer than those usually recommended in cookbooks).

Generally speaking, baked goods are done when a toothpick poked in the center pulls out clean. But you can also judge this cornbread by how golden-brown the cheese bits become on top. Yum.

Serve straight out of the oven with any combination of butter, honey, salsa and/or hot sauce you like.

Ooooooh! That looks yummy! I’ll have to try some with the green chile that’s being roasted in NM now!

Oh my goodness – I think I need to try this recipe!

Roasted green chile would be a fine addition.

I just made this last night and it turned out well! I cooked it in the cast iron skillet that I fried up the onion and peppers in (mostly so I didn’t have more dishes to do). Delicious!

Oh my …. just so many reasons to love this post.

Stucke, does it bring back memories?