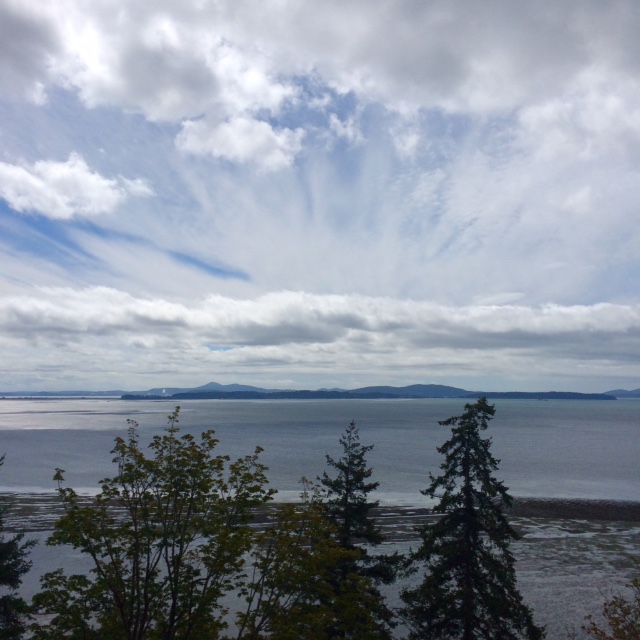 I woke up Wednesday feeling disoriented. I woke up today realizing exactly where I am: facing a vast crevasse that affects us all. This is our common ground. This is the turf we share. No matter which side we are on, this rupture unites us now, as Americans. And we must fight to fix it.

It does little good for any one of us to tell another, “Come join me on this side of the divide.” In 20-some years of journalism, I know that preaching one’s politics changes nothing. But listening, and finding the words to help others do the same, is the only possible path toward change. The only way to eliminate our divisions.

A few years back, I made three separate trips to Azerbaijan, a former Soviet republic, which is now an independent, oil-rich country on the Caspian Sea. I’ve been thinking of that place all week. I went there to teach local journalists how to craft narrative stories, and how to write proposals for grants.

The capital of Azerbaijan, Baku, sits on the sea. The city is an island of prosperity in a nation of need. I remember my first glimpse of The Wall—or, more accurately, The Walls—long, serpentine barriers, cleaving the city into disparate parts. The government built these walls to separate views of sightly and unsightly things. I was told that people call it “The Wall of Happiness.” It’s what you see when you travel from the airport to the city center. It’s what you see when you travel along the shore. On the sightly side are skyscrapers and beautiful new walking malls, parks and outdoor cafés, and the construction site of a giant tower that bears the familiar name of Trump. On the unwanted side are slums and old neighborhoods, and the people who inhabit these crumbling homes, amid wrecking crews prepared for massive demolitions.

Every day, I went to class and learned the stories of my students. They were all working journalists in a country whose government despises them. I learned of women smacked down in the streets. I learned of men beaten to a pulp, imprisoned, tortured. I learned of husbands whose wives were threatened with violence just because these men go to work and write. And I learned of curfews and whispers, and climates of anxiety in which everyone—journalists and all citizens alike—feared speaking to friends in public because someone was always listening, watching, waiting for missteps against the regime. I had one student who slept in the building where our classes took place because he could not walk the streets freely. He sought refuge in my workshop. That building was the only place in Baku where he said he felt safe.

Azerbaijan’s leader is a businessman who is notorious for his riches. His country is notorious for its oppression. When a prominent journalist investigated the grand wealth of the country’s powers that be, she was sentenced to 7 ½ years in prison (after years of suffering repeated threats, harassment and public humilitation). She was set free earlier this year. Her case sparked an international outcry that only furthered the investigations she had started. As for me, I have likely seen my last of Azerbaijan. A few months after my final workshop in Baku, the government raided the offices of the organization that had hired me, and the group halted its work inside the country (a scene of events the US State Department called harmful for Azerbaijan’s democracy).

I write these things today because this is what happens in a country that divides its people and shutters its press. And it’s not just Azerbaijan; it is everywhere journalists work in fear. Donald Trump campaigned on pledges to abolish press freedom. He has already blocked reporters’ access to his first political meetings as president-elect. Watchdog organizations call our new leader an enemy “unlike any we have seen in modern presidential history.” This is a grave danger to our future as a democratic society, no matter where we stand on our country’s divide today.

Last week, we saw Americans—our fellow Americans—selling and buying and wearing T-shirts condoning the lynching of journalists. “Rope. Tree. Journalist. Some assembly required.” We live in a world where reporting is disdained, where writers and photographers are killed for what they do. More than 1,200 journalists worldwide have died on the job in the past 25 years. Politics is the deadliest of all beats. Is this really the country we want? Have we really thought this through?

I have lived among many Americans who gripe about “the media.” I grew up with relatives who did (and do) the same—and often for rightful reasons. But the silencing of people and the press is a threat to all citizens, no matter which political side a person is on. There can be no flow of ideas, no informed citizenry, no right to democratic choice in a country that muzzles its own. This is why the freedoms to speak and write and assemble are so critical, our founders enshrined them in our Constitution.

There is a lot of talk this week about the many ways in which journalists failed in this campaign. I say we failed long before Trump and Clinton took to the stage, and we must do better. But we must maintain the right to continue our work without fear. We failed for years to cover the growing gaps between Americans, and the deepening resentments of families forgotten amid the rise of an extraordinarily minute elite. We relied on numbers and polls, but failed to put human experience and emotion into context. We offered data, when people needed explanations and stories to which they could relate.

America’s divisions have not surprised me, because I have seen them all my life. I grew up in sheltered suburbia, in a neighborhood of posh homes on the edge of one of America’s most violent and segregated cities. I have lived in a boom-and-bust coal mining town to which masses of jobseekers flock whenever the market offers a scintilla of hope. I have lived in a Northwest logging town, where families speak of the dead and dying mills that sustained their grandparents and parents—but not themselves or their children.

I live now just a few paces from a reservation line. The people who first dug this soil and watched this sky lived on this land centuries before others concocted absurd definitions of “native” and “immigrant.” My grandfather was an “illegal” all his American life. He was a European-born sailor who lived under the radar, in the American Midwest, for decades. But he was white, and so am I, and now, by biological luck alone, I have fewer worries than millions who fear the sociological consequences of skin color and human emotion.

As a journalist, I have spent most my career in places defined by division. And this is my greatest fear: that our American divisions will never heal. That our Walls of Happiness and Walls of Despair will grow higher with time. I have seen how a spark of malice can burn into an inferno of lasting destruction. That’s what happens in societies that hate and divide.

I’ve racked my brain this week wondering if we, as Americans, can repair the ruptures already in place. We are so different, it often seems. And yet, when I write stories about people, their lives and loves, their joys and fears, I find allies across my Facebook feed—among the left and right, liberal and conservative, foreign and domestic. It is human emotion that unites. It is connection to human commonalities.

So that is what I will try to do, from here forth. I will try to get up each morning and write not about the ways Trump can and will affect the climate—but how his policies affect people. Not about the Trump approach to international aid—but how that approach shapes the refugee dinner table. Not about gender equality in Trump’s new world—but about individual women as they live their lives, feeling the same human emotions each and every one of us experiences in one context or another.