The North Umpqua River near Roseburg

Jerry and I lived for several years in Roseburg. He worked at the local paper, The News-Review, while I went to graduate school up the road in Eugene. It’s sickening to hear what happened yesterday. That is not the Roseburg I knew.

Some of the best friends in life we found in Roseburg. Most of us have since gone our various ways, but the town remains in memory the spot where these friendships began, and grew. (And Roseburg is not nearly as tiny or detached as many national news reports, I think, are making it to be.)

We spent our weekends outdoors, as often as possible. We hiked the 79-mile North Umpqua Trail, through old-growth forests and alongside waters where steelhead spawn. We reported and photographed that trek for a five-part series that ran in The News-Review.

I grew my first herb garden on a tiny patch of dirt along the side of our rental house on a steep hill. We used to walk down that hill all the time, toward McMenamin’s Roseburg Station, meeting good friends for beers. On sunny days, we’d sit outside on the patio, grateful for clear skies.

I trained for two marathons in Roseburg, running long miles into the countryside, often in a drizzle. But the air smelled so fresh, so green, in way that happens only in forests. Then I’d get home and jump in the hot shower and relieve myself from the chill.

Jerry and I married on a ranch on a river in the hills nearby. Guests stayed in cabins, and we danced until late at night. We had kegs of Red Hook and local wine. We roasted a pig and told the caterers what we wanted them to make: corn, beans, olive salsa and so much more. We ordered nine different cakes from a local bakery called Tomaselli’s.

Umpqua Community College gave me my first teaching jobs. I spent part of a summer helping kids create their own newspaper, and later in the year, I taught Southeast Asian cooking classes to adults. I remember spending hours in the area’s Asian groceries, searching for the obscure ingredients I needed; then more hours in the kitchen prepping dishes. I wasn’t paid for all those hours, but I did it because I wanted to share what I knew—and the class greeted me each week with so much enthusiasm. I miss those days. I miss having all those hours to cook for people who were so interested.

One of the recipes I taught was tapioca. Many people don’t like tapioca, or they think they don’t like tapioca. But this one has coconut milk and mint, and sometimes fruit. It’s mild and gentle, calm and cool. Several months back, here in New Mexico, I took it to a Sunday brunch—a regular get-together started by an exceptionally generous host who opens his doors once a month to crowds of people. We eat salmon, drink coffee and talk. The tapioca was a hit, shared with strangers, and it was the impetus for new conversation. And it makes me think: what a way to symbolize peace.

I posted the recipe a few years ago, and I’m going to offer it again today. It’s simple but rich, a little bit sweet and full of comfort. And sometimes that’s just the thing we all need. 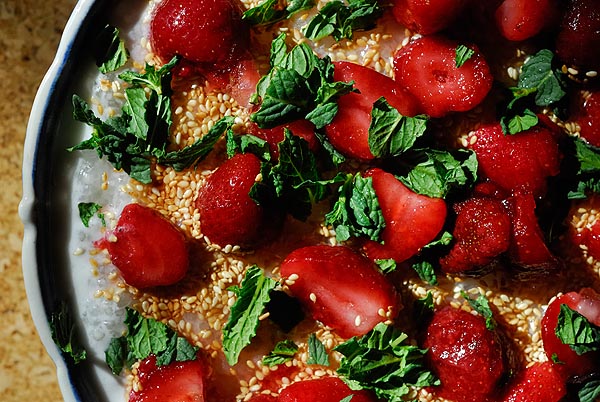 Method:
Rinse the tapioca pearls under cold water and drain well. Pour into a saucepan with water, sugar and salt, and bring to a boil. Stir constantly (the tapioca burns easily on the bottom of the pan) and cook until tapioca pearls turn translucent. I have found the cooking time varies dramatically depending on the type and size of tapioca as well as altitude. You’ll know it’s done when the liquid is absorbed and the tapioca has become gelatinous while still maintaining some of the pearls’ shape. Taste, remove from heat and stir in coconut milk. Let cool until the mixture is firm. Top with fruit, mint and sesame seeds. Serve chilled or at room temperature. 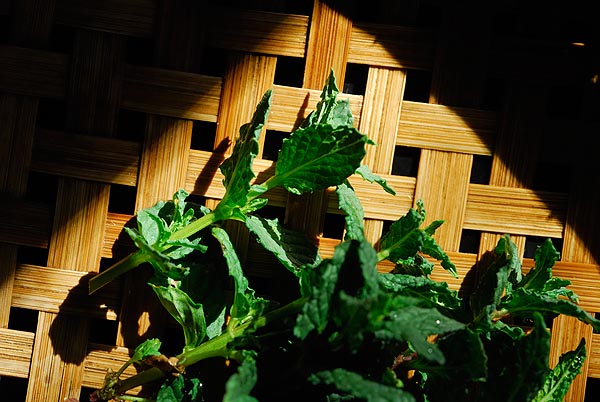 2 replies on “A Recipe for Roseburg Peace”

I’m happy to report that I have most of the ingredients, that I’m close to being able to prepare this recipe with peace in mind and heart. Like cooking, healing comes about from a myriad of tasks culminating with something that will sustain you, over time, one moment at a time. Your story helps to lighten my heavy heart. I appreciate your sharing it.