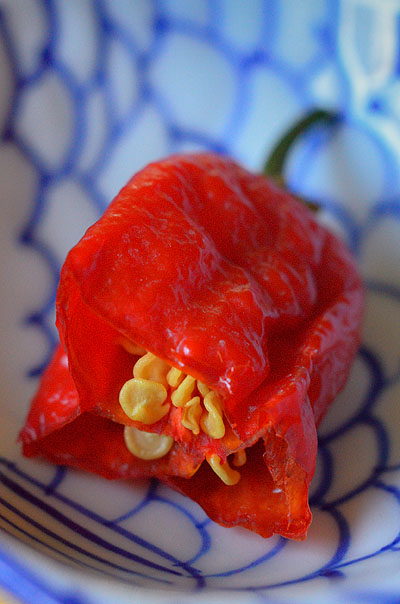 I’m here! (Some of you have asked.) I haven’t abandoned you, or this site, or my commitment to food. But the year so far has kicked me in the pants with deadlines, book promotions, travel prep and plans for a little shake-up here at Rambling Spoon.

The next time you come around, we should be on our way to Yangon. And you’ll find a little something different here on the site. I’m thinking more interactive, more video, more sounds. And more opportunity for a mix of long-form stories with daily blurbs.

If you follow the Rambling Spoon Facebook page, you know that’s where I like to post daily tidbits on all things food—the politics of what we eat, threats to farm and field, people who grow our goods, recipes that make our kitchens come to life. (You’ll find some of these things on Twitter too. Come join us on Twitter if you haven’t already!) If you’ve followed the Facebook page for a while, you might have noticed… that you’re not noticing it as often anymore. That’s a problem, and this explains why. The Facebook gods aren’t showing you everything there is to see, and they’re hoping folks like us pay to change that.

Well, that’s not what Rambling Spoon is about. Frankly, I give enough of my heart, soul and—yes—dollars to the work I do and the issues I think important. (Eternal Harvest never would have come about, had we not paid out of pocket for the reporting that went into it.) So rather than pay Facebook to reach you, I’m going to reshape this space to accommodate the content I want to offer—short reads, long reads, links, blurbs, tidbits, quotes, comments, photos, videos, sounds and snippets from the world of food. (I’ll still keep the Facebook page too, but you’ll be able to start using this site as a regular source of newsier information.) It’s not all set in stone yet, the wheels are in motion. But soon, very soon, Rambling Spoon will offer something new.

FIRST, though, I want to tell you about the Nagas and the chocolate.

That photo up top is half a Naga chile, grown last summer in our New Mexico garden. We’d purchased two bhut jolokia plants from a local vendor after several unsuccessful previous attempts to grow what once was, not so long ago, the world’s hottest chile. (If you’ve been around this spot for a very long time, you might recall the story we did for Gourmet in 2008, traveling to Nagaland to meet the farmers who grow those wicked-hot chiles.)

Well something in the air, the water (or lack thereof) last summer worked wonders… 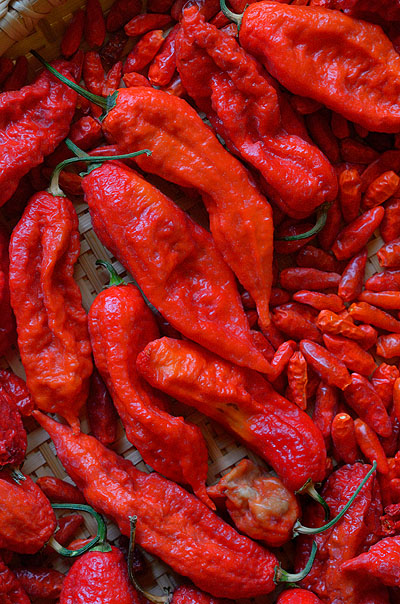 …and we ended up with a bumper crop of Nagas. Pequins, too—those little guys beside the biggies in the basket above. 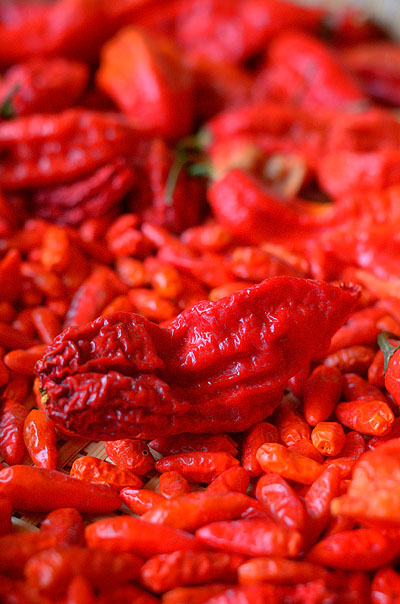 The pequins I like to crush into just about anything. They’re fruity and aromatic, with just the right amount of heat to appease my spice-liking taste buds without overpowering. But the Nagas present a dilemma.

We have a whole jar of them, dried and waiting. But this isn’t the sort of chile to just crumble into a morning smoothie (as we do pequins) or toss into a stir-fry with the tofu and veggies. This chile’s a killer. (Read the story.) We’re talking more than a million on the Scoville scale. We’re talking bleary eyes, scorched tongue, dizzy head and borderline dementia.

What do you do with a chile like that?

One day last month, my dear sister-in-law arrived with a jar of her version of “5-Star Hot Fudge Sauce,” based on a recipe belonging to a longtime family friend. Except Joanna’s recipe used spices and chile, and it had kick. But here’s the thing: she took the chile out after a few minutes in the pan. It merely mingled with the cream and sugar, just long enough to infuse the mixture with flavor (and plenty of heat).

Here’s the recipe. Thank you, Joanna (and Mrs. Ess).

Method:
In a medium-large saucepan, cook the cream, spices and chile over medium-low heat until it is reduced to about 1 1/2 cups (about 15-20 minutes). Do not let it boil. This requires some attention and stirring to make sure the fat stays incorporated.

Once the cream is reduced, whisk in the brown sugar until it is smooth. Remove the pan from heat. Strain the spices and chile through a sieve to remove them from the mixture.

Put the cream mix back in the pot, and add all the chocolate. Stir until it is all melted (over low heat, if necessary). Do not boil the mixture at any point.

Whisk in the butter until smooth. If using, add the rum.

This makes about 3 cups of (Joanna’s words) “amaze-balls fudge sauce.” Keep in an air-tight container in the fridge if you need to store it. Great with ice cream or straight out of the jar.

with blueberries and honey chèvre, served in a cocktail glass. Like this: 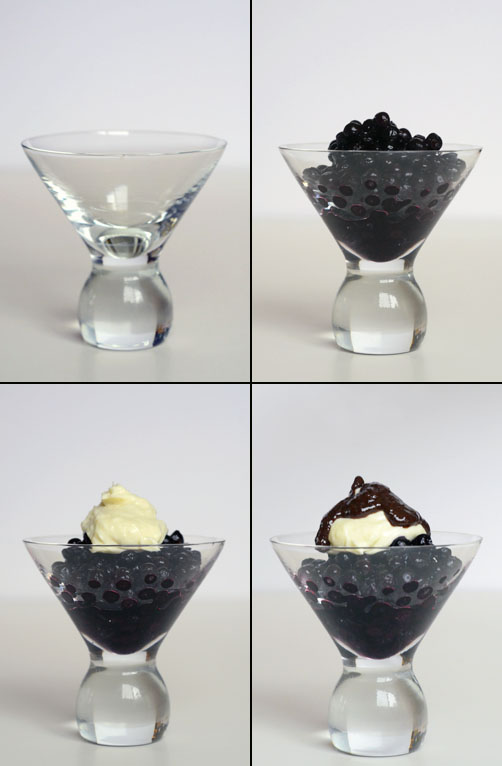 I’m sure Conni will enjoy your mods to her famous sauce.

Sounds fantastic, with all the heat and the spices and rum! yum yum!

Interesting recipe! Definitely will try it out soon. Thank you!