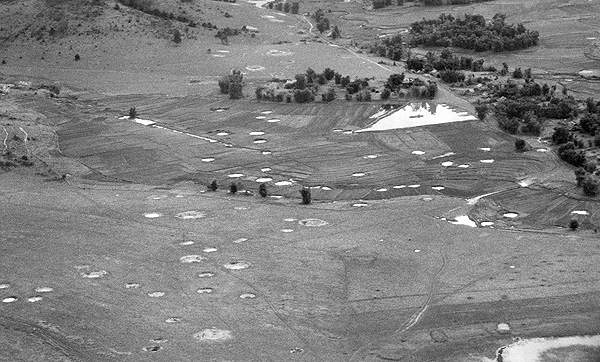 SCARS OF BOMBARDMENT: an aerial view of the countryside around Phonsavanh, Laos, showing the ubiquitous bomb craters that remain throughout the province, 40 years after US bombs fell across the country.

This week, our nation grieves for lives lost, bodies broken, futures ripped to bits. We mourn the blood splattered on sidewalks of innocents. It is unconscionable, what happened in Boston. As human beings, we struggle to understand. But there are no answers to our repeat questions: Why? Why then and there, to him and her, in that particular city, at that particular event? How long can we expect this pain to last?

As a country, we will move on, because life does. Time does. But grief never expires, it merely moves to the backdrop of daily routine. The memory remains, and many victims will carry both physical and mental reminders through every passing day.

It’s like war: how do we really know the end of war? How do we know when to stop grieving?

It is sadly ironic that the Boston Marathon bombings occurred this week, of all weeks, as we note another key date in a long line of human tragedies with bombs. By some accounts (no one knows for absolute sure, and I’ll explain), April 17, 2013, marks 40 years since the last American bombs fell on Laos. Forty years since the end of that violent deluge—yet nowhere near the end of grief. For nine years straight, US forces flew, on average, one raid over Laos every 8 minutes. They dropped 2 million tons of bombs. An estimated 30 percent of those bombs didn’t detonate, and they remain in the soil today. Since that time we classify as “the end of war,” more than 20,000 Laotians have been killed or maimed by bombs. For many Laotians, the pain runs as deep right now as in any previous year.

If you read this blog regularly, you know that Jerry and I have a book due for publication this June. Eternal Harvest: The Legacy of American Bombs in Laos (ThingsAsian Press, June 13) is the result of our seven-year investigation of Lao life among bombs. We trekked across the countryside, interviewed hundreds of villagers, and recorded their thoughts and hopes and losses.

I was not in Boston this week, and I cannot say what it was like to be there. But I can share a few things I’ve learned in Laos.

Every victim is different, and every case unique. But the psychological damage left in the wake of a bombing sometimes lasts years, even decades. Trauma from the blast, fear of more to come, feelings of loneliness and inadequacy, worry about future work and well-being, and the invisible but real pain of a limb no longer there—these are the scars that far outlast the incident itself. 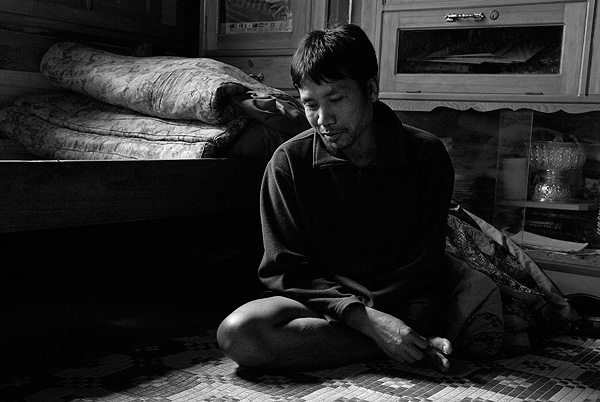 Phou Vieng lost his left arm and leg when digging holes for a new house for himself and his new bride in 1998. “I hit something left from the war.” Now he lives in a house on the edge of Phonsavanh and his wife is the family breadwinner.

In the aftermath of bombings, I find the mechanics most difficult to fathom—the mechanics of a device so deliberate in its design, so efficient in its methods, for such monstrous outcomes.

All bombs are ruthless. They obey the laws of science. And bombs like those used in Boston—reportedly packed with bits of metal—are strategically designed to shred human flesh. Whether stuffed into a casing and dropped from an airplane high in the sky, or built with a pressure cooker and planted amid swarms of spectators, that bomb behaves in a predetermined way when it blows.

Tiny bits of metal are shot in all directions, with the straight-forward mission to annihilate. We’re told this type of bomb is a killer device “favored by terrorists from New York to Afghanistan.” But this method of jamming an explosive with bits of metal is also a favorite of militaries throughout many recent wars.

Embedded in that bomb is the same concept used in cluster submunitions, the baseball-sized bomblets that are loaded into casings and dropped from mid-air, little weapons to be scattered across the land. That’s the type of bomb most likely to kill Laotians today—when farmers find them in their fields, or children toss them like toys, or the devices burst into flames as families light their nightly cooking fires on land contaminated with ordnance.

The physical effects of a fragmentation device are gruesome. This Landmine Action report explains the impacts on a human body (taken from a Third World Network emergency medical manual, Save Lives Save Limbs):

“Although the inlet wound looks small, the damage inside can be massive. A stone hitting water makes waves. Our body is 70 per cent water. A fragment sends pressure waves into the tissues. The waves are very fast and hit the tissues like a blow. How the tissues are damaged depends on how elastic they are (how easily they stretch).

The skin is very elastic. It stretches when the fragment passes through then springs back without much damage.

But muscle is not very elastic. The pressure waves tear a wide and ragged wound track through the muscle. Because muscles have a rich blood supply muscle wounds bleed a lot.”

Bone, the report continues, is not at all elastic. It will stop a fragment in its tracks. A pressure wave forms, “like the splash from a flat stone hitting water.” Human tissue suffers the damage of that force, the report states. Imagine trying to heal from that pain, those wounds. And then, imagine the psychology. 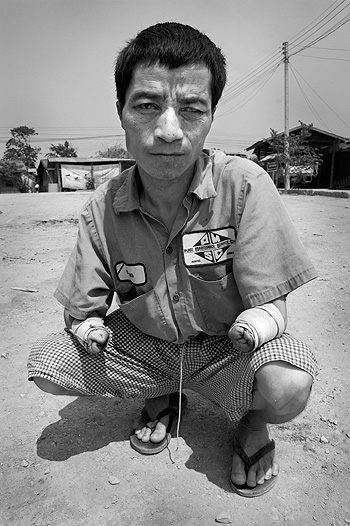 Bo Ya, 35, begs for money at the bus stop in the tiny town of Kiukacham. He lost his hands and most of his vision when he picked up some UXO ten years before.

In Boston this week, there were moments of uncertainty and long minutes when no one knew whether more blasts would come. I know a smidgen of that fear, having covered shootings and riots, not knowing for sure when the firestorm would end.

And I have tried to comprehend the weight of such fear when I interview bombing victims in Laos. In decades past, during the height of war, people naturally feared the next day—when more planes would come with more bombs. Today, the fear is underground. It’s in the knowledge that a calm day on the farm could suddenly, abruptly, turn life inside out.

According to the Center for Air Force History’s unclassified report, The War in Northern Laos 1954-1973, the last US bombings occurred this month 40 years ago. And according to Spencer C. Tucker’s authoritative Encyclopedia of the Vietnam War (2012 edition), it was on April 17, 1973, that the last Operation Barrel Roll sorties were flown over Laos.

The history is hazy because much of the documentation is. Some sources point to March 29 as the last day of bombings, but the National Archives database contains records of raids and bombings well into April. Not all entries are complete—all of these records, from all the years of warfare throughout Vietnam, Cambodia and Laos, were originally filed with punch cards, recorded to tape and subsequently re-recorded to new media. It’s easy to see how clarity was lost. There were years between transcriptions, during which various media degraded. And in some spots, entire months are missing from the records—for unknown reasons. But these archives offer the most of what we can hope to know right now.

I wanted to get a sense of what life might have been like for people living in Laos on April 17, 1973, that supposed “end” of war. And on that day, according to National Archive records, the US Army and Air Force initiated some 60 missions originating at various bases—Nakhon Phanom, Korat, Takhli, Anderson, Udorn, Ubon, Utapau—aimed for Laos. There were F4s, A7s, F111s, EC130s, EB66 Cs, U21s and B52s. Many were reconnaissance missions. Some were aborted. Some were diverted to Cambodia. But three missions originating at Utapau were noted as “heavy bombard.” While there seem to be double entries for those three attacks, the records indicate each plane was loaded with 500-pound MK 82 general-purpose bombs. Their targets were precisely entered into the archive. The planes dumped their loads near a trail snaking along the Nam Ngiap River in Xieng Khouang province.

When I look at those coordinates on a satellite map today, I see pinpoints—one near a village called Thaviang, another up the road a bit, and the third in a green mess of forest.

I wonder: what was it like on the ground that day, 40 years ago? It’s unlikely villagers would have heard the B52s that dropped those bombs—they flew too high for detection from the ground. But other flights—for reconnaissance or electronic intelligence gathering—civilians might have seen and heard. And feared. 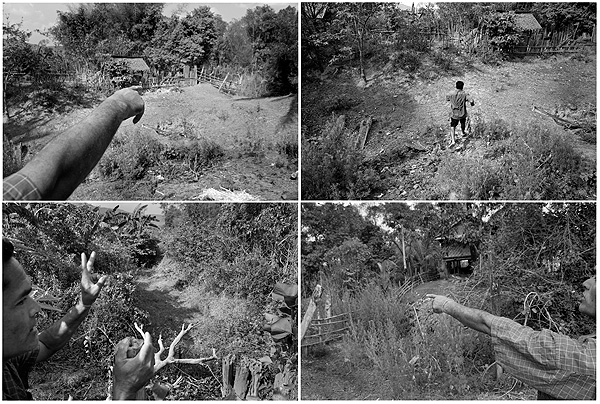 A man named Bounkheng, who says he fears the unexploded bombs in his village, points out craters everywhere on a tour through the small town of Boualapha.

That’s another thing I’ve learned from villagers who lived through that time: people feared the planes. They never knew when or whether or where the bombs would fall, but the fear set in when the skies rumbled with engines (and later when the ground shook from unforeseen attacks). That fear, they remember clearly. It would haunt them on April 18 and April 19. It would haunt them months down the road. It would haunt them through decades of accidents that have claimed the lives and limbs of friends and family.

That fear haunts them still.

That is the human toll of terror by bomb. We can count the dead, we can tally the injured. But we can never quantify the scars that remain on land, body and mind. And in that way, a fragmentation bomb is the utmost of insidious weapons. 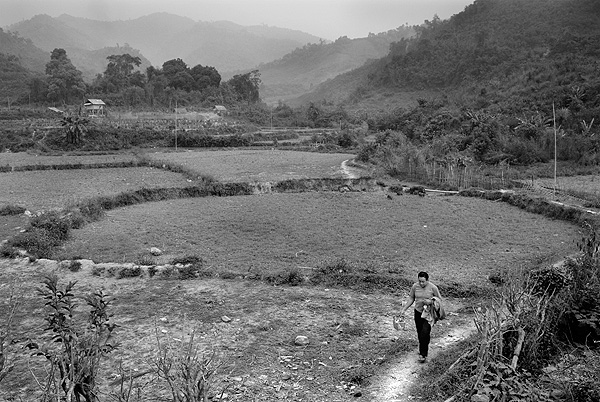 A local farmer returns home from washing in a stream near Sophoon. The field behind is where another villager was injured by a bombie when she was digging with her husband.

4 thoughts on “On Boston and the Eternal Tragedy of Bombs”