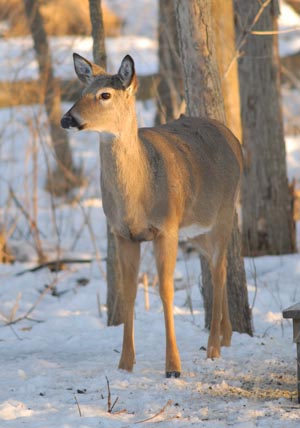 Sorry, no food photo this time. Just this little guy to set the mood. Spring is springing in some parts of the Midwest, but we’ve seen a lot of the white stuff in the past few weeks, with another six inches predicted for the UP.

My mother and my mother-in-law are two distinct creatures. They often think in distinctly opposite directions, and they tend to live life in distinctly different ways. Now, before both mothers start reading into this and making outlandish, erroneous inferences: this is not a judgment, merely an observation. Ma Coates and Ma Redfern have distinctly different personalities. But their family roots are tangled in the same Austro-Hungarian origins, and consequently their kitchens contain some of the same European dishes, though prepared from distinctly different recipes.

It just so happens, in the past few weeks of family togetherness, both mothers chose to prepare their feel-good, home-cooked versions of goulash. Or gulyas. I fully enjoyed both, different as they were. And so I give you two distinct recipes for this oniony, zesty meat-paprika stew. Enjoy!

Feeds 8-10 hungry people. Serve with any combination of: wide noodles, crusty bread or rice, cucumber salad, corn on the cob and a good wine.

Lightly toss the seasonings in a large metal or glass bowl and let them wait a bit.

In 1 tablespoon oil, sautÃ© the chopped onion over medium heat until translucent. While onion cooks, toss the cubed meat with the mixed seasonings, rubbing the seasonings into the meat (it helps if you liked playing with mudpies as a child).

Turn down the heat, move the sautÃ©ed onions to a separate bowl, turn the heat back up to medium-high and start lightly browning the meat in batches. As each batch browns, move it to a bowl and reheat the pan and do another batch.

While the gulyas is braising, drain and rinse the sauerkraut until the vinegar taste is gone. Mix the sauerkraut with the grated potatoes (note: if using wine-cured German sauerkraut, most the rinsing is not necessary).

When the pork is just tender, add the sauerkraut-potato mixture to the gulyas, stir gently to mix, put the cover back on the pot, and simmer for another hour or so. This distributes the flavors, and the grated potatoes thicken the gulyas without any flour or extra potato starch.

Taste and adjust as needed. Turn off the heat. When the gulyas is just warm/hot enough to eat, you can stir in between Â½-1 cup of sour cream, if you like your gulyas creamy. Or you can serve the gulyas with a dollop of sour cream, a sprinkle of paprika and a toss of chives or dill. Or you can let the gulyas cool to room temperature, store it in the crockpot in the refrigerator, and heat all or portions of it as needed.

My motherâ€™s mother (Helen Arnold) left Europe alone, crossing the Atlantic by boat and arriving in the United States as a teenager. She settled in Milwaukee, where she raised four boys and a girl, and fed them traditional Hungarian fare such as goulash. Sadly, that recipe has been lost over the years, but the following rendition comes from a family friend. My mother likes it because it is easy to make and it tastes like the goulash she remembers as a child.

In heavy kettle, lightly brown meat in 2 tablespoons oil. Remove from pan. Add last tablespoon of oil, if needed, and saute onions with salt until golden and soft. Stir in first paprika, meat and enough water to just cover. Simmer covered one hour. Add second paprika and additional water to just cover, if needed. Simmer covered an additional hour or until meat is fall-apart tender. Add potatoes and simmer until done. Serves four to six.

Well, Ma Coates, your recipe does look very tasty! I think our mothers would have gotten along just fine in the kitchen.

Kosonem (umlauts over the O’s – thank you in Hungarian), Karen, for paying respects to the family recipes.

I’ve recently bought some bright red “genuine Hungarian paprika” and some even more bright red “genuine Hungarian paprika” (as opposed to the brown Turkish paprika usually on sale here in Hackney). Having read a bit of Herve This’s book, I shall be setting up an experiment shortly, cooking one portion of goulash with each of the spices and comparing them. I’ll let you know how I get on.

I’m eager to hear about your results, Trig!

To Ma Redfern–Your recipe also looks very tasty, different from any I’ve ever had. Perhaps our “house guests” will give it a go some time.