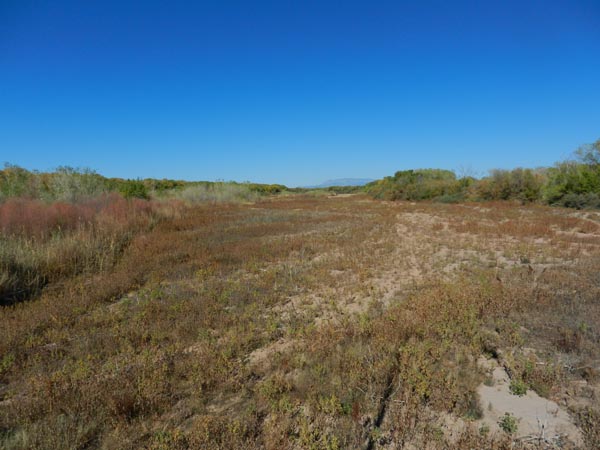 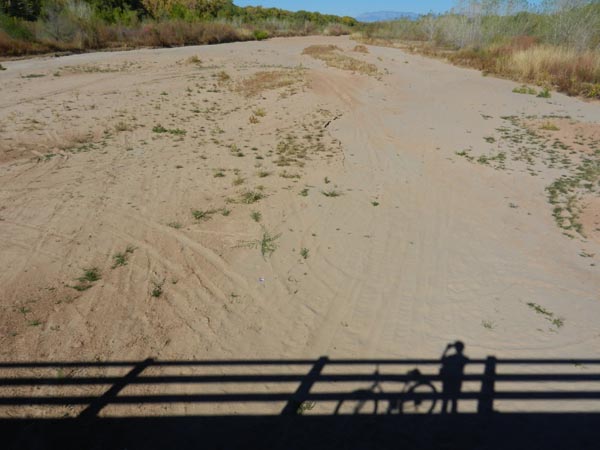 But it’s disappearing. Every year for the last several, this river has, at times, completely vanished in some of its stretches. We tell people this: The river dries up. No, really, the river is completely gone. Most times, I don’t think people get it. I don’t think they understand. It’s hard to picture a river with no water.

Right now, we have a little stream. But last month we did not. So I took pictures. I rode my bike to a nearby bridge and snapped a few shots. Then I got right down into it… 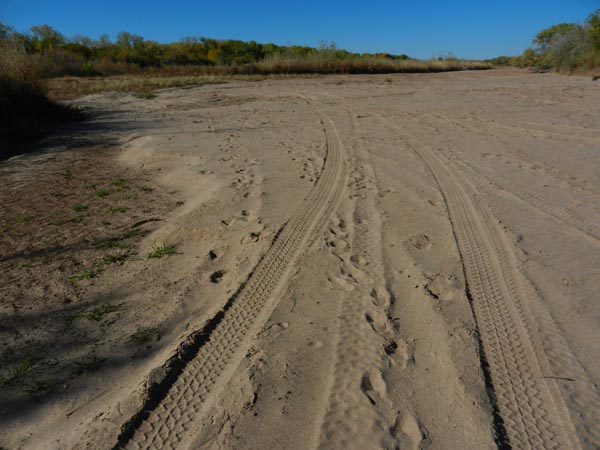 …in the sand, where plenty of feet and a few tires had gone before me. This is the Rio Grande, October 2012. What will it be next year? And the year after? And what can anyone do?

I asked Jerry what he thought—he is, after all, in Boulder on a fellowship studying data visualization in order to create a digital story of this river. He replied with several questions:

“If a river is defined by water, is it still a river if there is no water?”

I’m not sure we know the answer to that—but nature always, eventually, has an answer.

“What do you do with a river when it runs out of water? What do the people do? What do the animals that live along the river do? How many national icons can you think of that have been used up?”

The factors leading to these arid pictures are, of course, varied and complicated—less rain, higher temperatures, diminished snowpack, large-scale development and agriculture, all tapping into the river’s limited capacity. My thoughts on water have changed a great deal since we moved to New Mexico. I think about its scarcity when I turn on the tap. I think about its vulnerability, and the luxury it really is to have a free-flowing faucet, hot or cold.

“The Rio Grande is a national icon whose key identity no longer exists for part of the year,” Jerry says. “For me, it is a book full of questions.”

2 replies on “When the River Runs Dry”

Indeed. What a sad story that we’ve created the context in which this great river, the Rio Grande, has no rights to its own water. Much as climate change and drought have a major effect on the river’s flow it is diversions and depletions by humankind that are the biggest threat to the Rio Grande. There are solutions that have been implemented on nearly every other western river–just not yet on the Rio Grande. I love your images. I am wondering if I could use them as a part of the environmental advocacy work that I do with my organization, WildEarth Guardians. Thanks for sharing your voice for the river.

Hi John,
Thanks much for your thoughts. I’m emailing you now about photos….