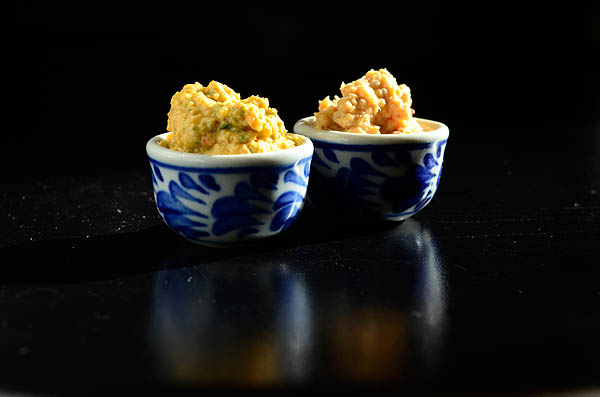 In the aftermath, I made turkey spread. Two types: a mish-mash of Mediterranean flavors using olives, capers, and lemon; and a Japanese-inspired version with miso, ginger, tamari and sesame seeds. When life hands you leftovers, make spread.

I hope this season of giving and gratitude is treating each of you kindly. I spent most of last week away from the Internet—after racking my brain for three days on this story about President Obama’s visit to Cambodia. With that work done, I had little desire to post, tweet or type much of anything further as Thursday drew near. My focus shifted to the kitchen.

Trouble was, our kitchen had no water. We had a 14-pound bird in the fridge, a holiday guest list of eight, a broken pipe, an unplanned trench in the yard and a couple of plumbers scratching their heads. That’s what happens when you try to have a tankless water heater installed two days before Thanksgiving (really, the only feasible time we could have it done in the months between August, when Jerry started his fellowship in Boulder, and Christmas, when we’ll be back for winter break). You know how it goes.

And that’s where all the gratitude comes in. To family and friends, and to the luck of our draw. Everything turned out perfectly, brilliantly. We ate and drank and celebrated. We had a warm house full of good people and good cheer. It just wasn’t our house. As it happens, we’d been watching our friends’ cats. They were away in San Francisco, leaving behind a big, gracious kitchen with plenty of hot water and oodles of room for our party (generous people, they are!). So we moved into their house for a couple of days and celebrated Thanksgiving in their absence. Years ago, something similar happened to our home in Oregon when we left town and friends ate their feast at our table. Everything goes around and comes around; that’s the circle of life. And that’s what it’s really all about anyway—giving and receiving, thanking and appreciating.

Two days later, I made turkey spread. I don’t have formal written recipes, but here’s how it went:

In one batch, I put into a food processor big chunks of turkey meat with several hunks of ginger, two big spoonfuls of miso, a few pours of tamari, half a chopped yellow onion, a handful of sesame seeds, a glug of rice vinegar.

In the other batch, I put more turkey meat with half a cup of sour cream, two big sliced shallots, a squeeze of lemon, a couple tablespoons of capers and olives, a tiny garlic clove, a shake of sea salt, ample smoked paprika and several pinches of fines herbes.

And that’s it. Spread on crackers or rice cakes. Smoosh between a warm tortilla. Give thanks for the deviations that forever keep life interesting—if not exactly as we plan.