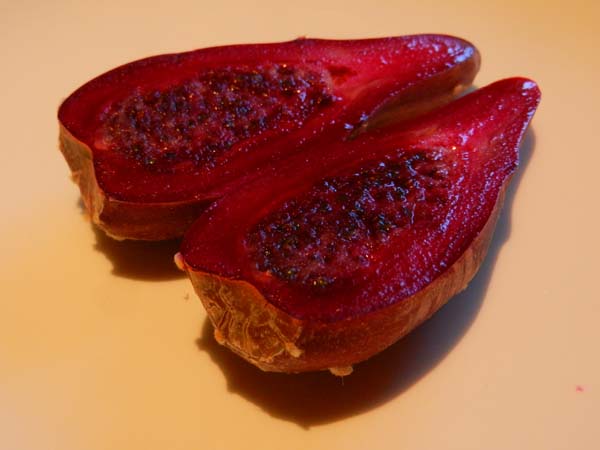 When we bought our house five summers ago, we planted a cactus garden in a hard patch of caliche beneath our westward facing office windows. It seemed the only thing to do. 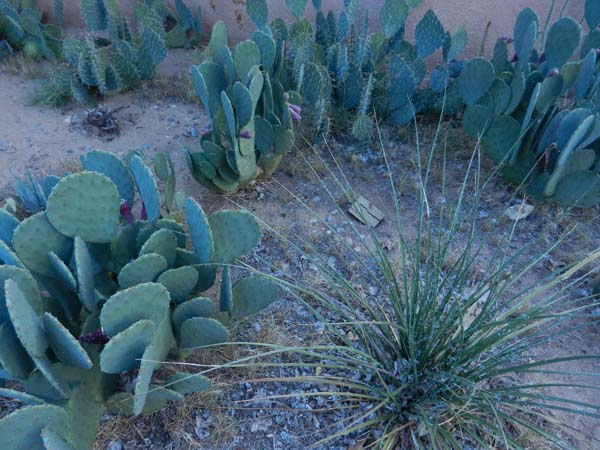 That little plot of land catches harsh afternoon sun all through the year, and that New Mexican soil won’t give an inch to shovels or hoes. Cacti are native. They belong in that dirt. And they’re equipped with self-defense tools… 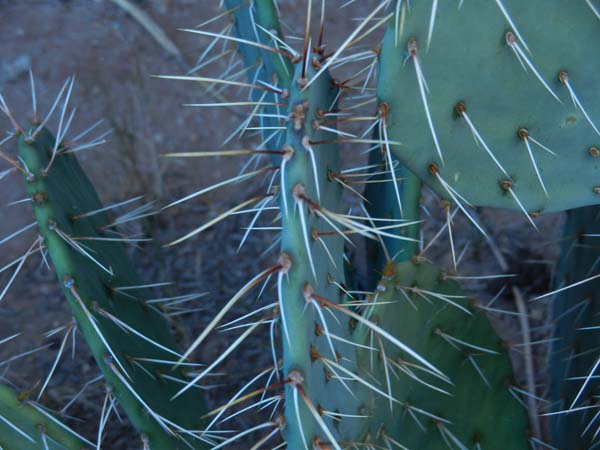 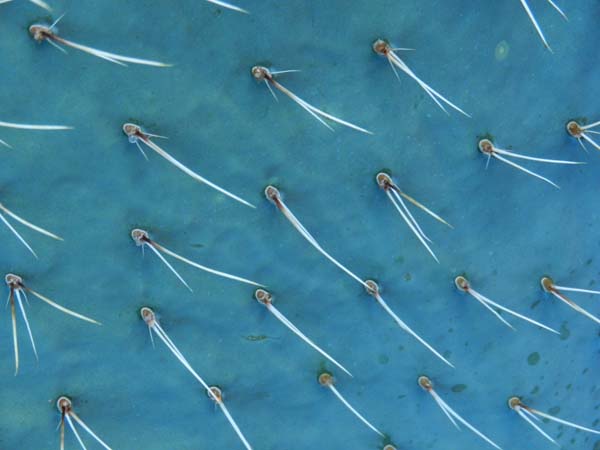 …that would naturally repel potential intruders during our long absences abroad. No one wants to tangle with this garden. 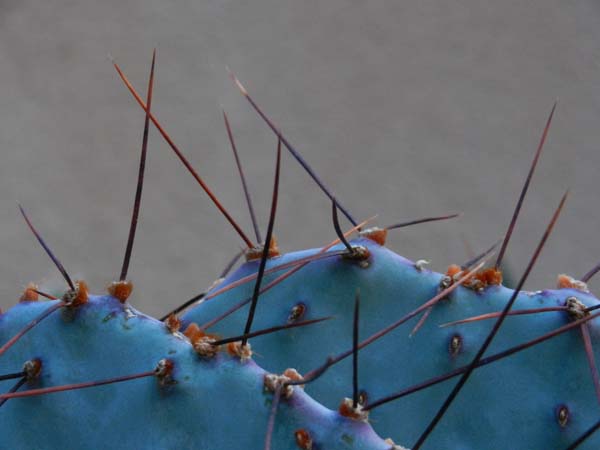 We started with just a few paddles, but they quickly took hold. They multiplied and expanded with abandon. We’ve had cactus paddles, looking dead, lying on the ground, and poof! Up they come, alive with vigor, growing more paddles.

We don’t do anything for the cacti. We don’t fertilize. We don’t weed. We don’t even water, except for the rare hosing-down during the hottest months. They just grow. And every summer, they burst into bloom… 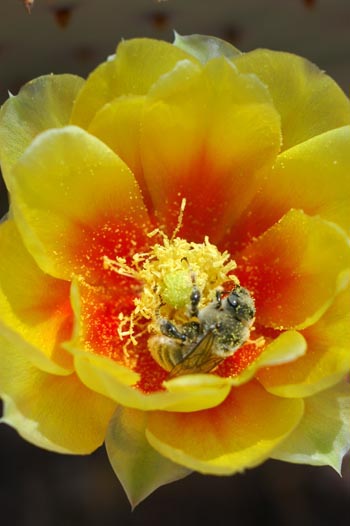 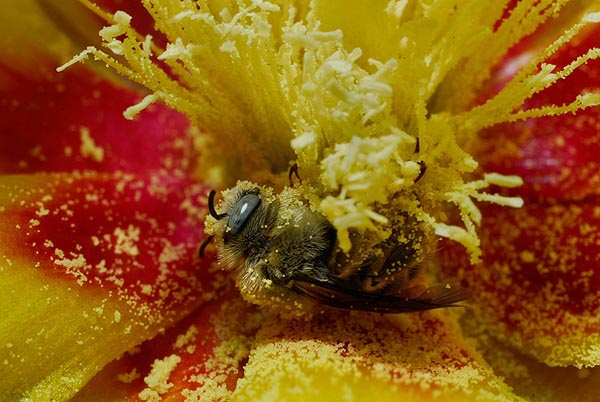 They are the desert’s gifts to us. And although we bought this yard with the hopes of growing our own food (and making our own wine), I never thought of that cactus patch as edible potential. 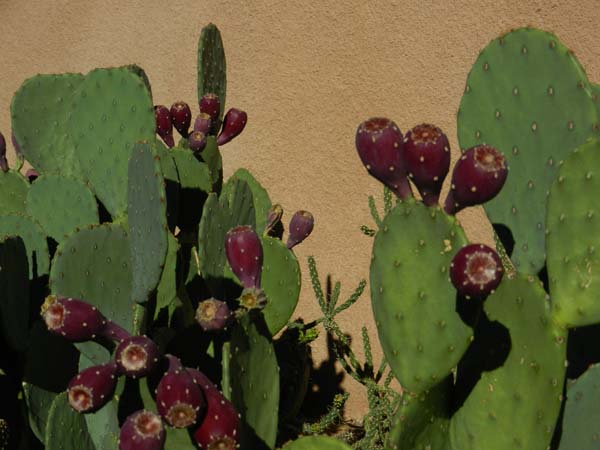 Every magenta bulb is a fruit called a tuna. Each one is full of juice, packed with antioxidants. They get their beautiful color from the same substance (betalains) as beets and bougainvillea. Desert dwellers have long eaten tunas to fight diabetes (and possibly, they’re good for hangovers too). 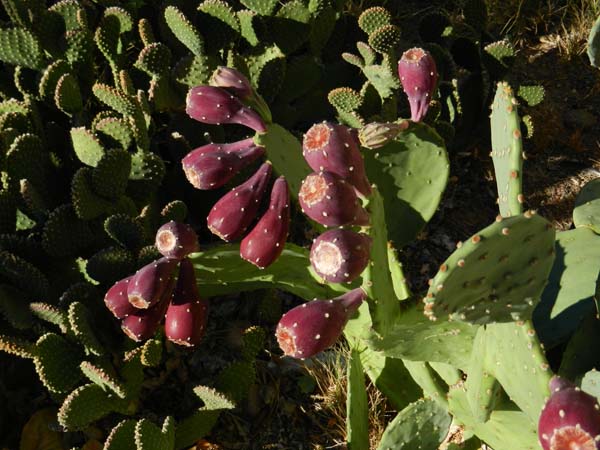 Yesterday, I noticed the tunas were starting to droop. Just as our peach tree this year bowed to the earth with the weight of its fruit, so too did our cactus paddles. I took tongs in hand and began to pluck the tunas, dozens upon dozens, until I had enough to fill a bucket. I will juice them this weekend. But it’s tricky business. 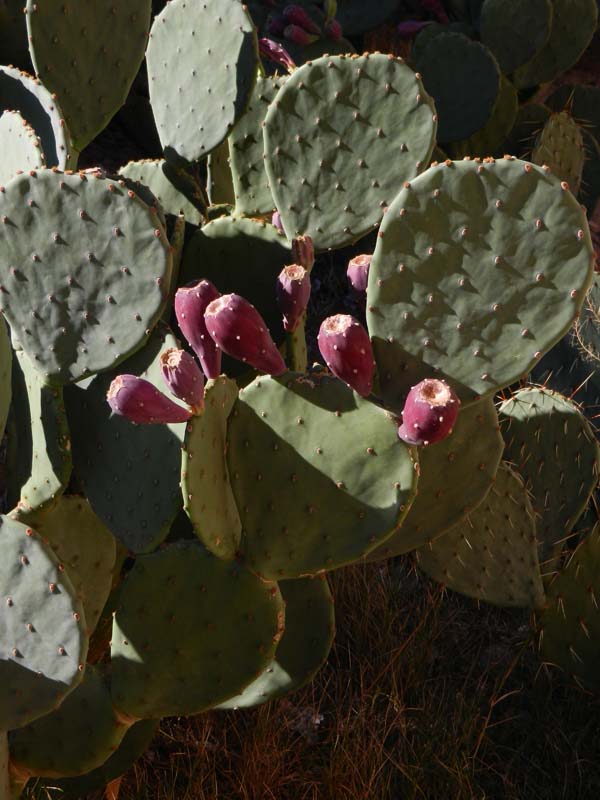 You saw those prickers above: each fruit also has its own set of fine, spine-like hairs known as glochids, which can work their way into your skin and take you by surprise. I’ve juiced tunas before: first, using market-bought fruits with no glochids; second, with a friend one night as we struggled for hours to remove the prickers. I’ve since been reading of a seemingly easier way. I’ll give it a shot. 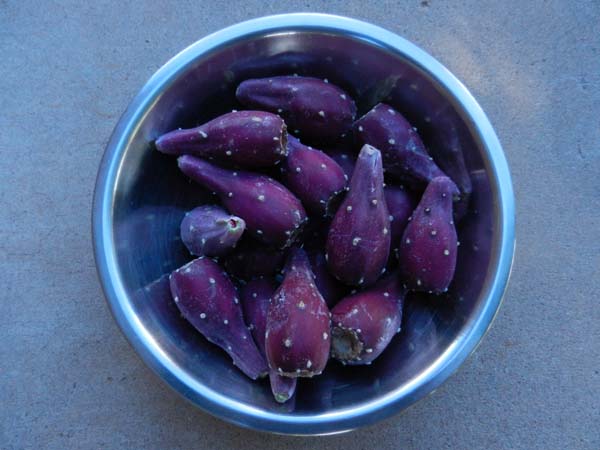 Today is Food Day, and that’s exactly why I am telling you about tunas right here, right now. This day was established as a nationwide celebration of healthy, affordable, sustainable food. I can’t think of a better plant to honor than the humble cactus: It grows abundantly, without demands. It is the definition of sustainable. It seeks no more water than the desert can provide. It offers both beauty and protection. It nourishes bees, and it feeds our birds.

And now, it feeds us. 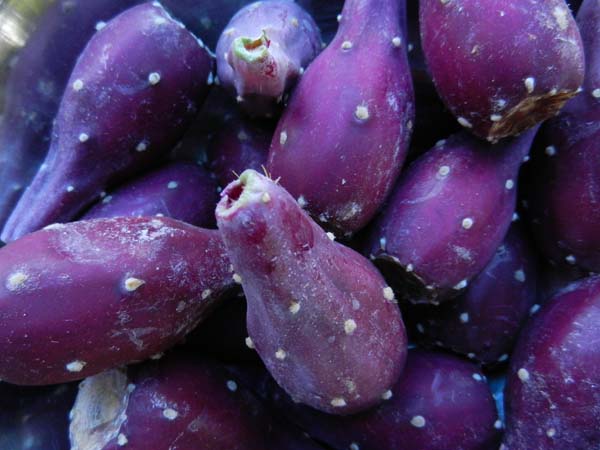 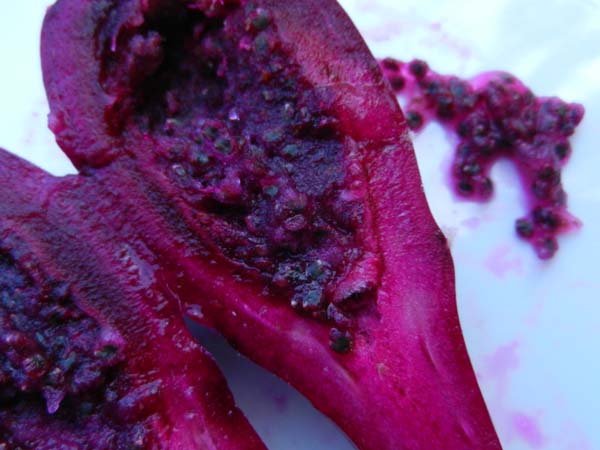 *A note on photo credits: Jerry took the flower & bee pictures in this post, I took the rest.

Goodness this makes me crave Oaxaca’s nopales in street cart taquitos. There is a swank restaurant in Oaxaca City’s zocalo that makes all recipes from the book “Como agua para chocolate,” which includes all sorts of cacti dishes.

Mmmm, Hannah, it’s lunchtime and you are adding to my hunger. (Next, of course, on my gardening to-do: harvesting those paddles and making my own nopales.)

Happy Food Day Karen. I’ve never seen tunas (or is it tuna) before. They look like something straight out of Dr. Seuss!

Hi Genie,
Aren’t they funky? Las tunas, as they would be called in Spanish. Happy Food Day to you, too.

Using a pair of kitchen tongs to hold the fruit, use the gas stove top and burn off the glochids. Of course the skin may split some (from the heat) and you may make a mess on the stove top, but it has worked for us in the past.

Ha! Jojo, I am *so* not surprised the method used in your household involves flames 😉 Thanks for the tip.

Not sure how I knew you could burn them off, or perhaps I learned about it from my friends, who teach me so much. One such friend told me the cactus paddles are as slimy as okra, and too slimy for her, but she cooks them for her husband. She fries them.

Limner, the paddles are rather slimy… and I like them. I also like the slime on okra. And I like natto. I’m strange. But the paddles (nopales) are great when sliced and pickled. Good on salads w/plenty of cotija. I always think the fruits are somewhat misleading because I expect them to have intense flavor, akin to pomegranate. But they’re not. I find them somewhat mild, a bit tangy, a little like cucumber, a tad like wine, possibly some kiwi and/or watermelon. The juice is good in cocktails.

You are the only person who has eaten the paddles, described it, and made me want to try them. I am an okra fan but it’s never slimy when I cook it. I love okra, onion and tomatoes, finished off with ample squeezes of lemon, eaten with corn bread, chased with ice water and a cloth napkin. 🙂

My brother told me about his encounter with his ex mother-in-law’s cactus when mowed her lawn recently. He accidentally brushed against it. Said it took almost two weeks to wash the needles from his jeans. It took tweezers and bifocals to yank them from his skin. The thorns actually cause infections if they’re not completely removed.

I live in Katy but only rarely see cacti. Lately I’ve seen it in the veg section of our local Kroger. Thanks for teaching me something new. I might try them in a restaurant, but doubt cooking them.

Limner, those needles are nasty. I jabbed my hand several years ago and I’m not sure I ever got all of it out. It was red, sore and itchy for weeks. I still have a little spot on my skin where the needle got me. In any case, enjoy your experimental eating!

Hey again. You don’t have to post this, but I just discovered a recipe for Prickly Pear Margarita in this month’s edition of Texas Monthly Magazine. You told me the fruit is used in cocktails. Those little things are called prickly pears! Did you know that? LOL. You can buy prickly pear puree. I didn’t know that. 🙂

Have a great weekend.

Limner, yes! Prickly pear is another name for the fruits. I’ve never bought the puree but I understand it can be fairly expensive. Hmmm. Maybe I should start juicing for market….

Hi Karen, This is great! I’ve eaten the tunas and nopalitos wild on my herbal excursions and wine made from the tunas is Divine! I make prickly pear chocolate truffles and served them when I had my chocolate shop. Total Yum!

I eat the nopals as often as I can as they are good for the system and a host of ailments.

Perfect Puree is the company that makes the prickly pear puree frozen. It is available through several food distributors and online too. It is good to use when you need a lot all at once, although it sounds like you have pounds upon pounds to make your juice.

Just be careful with this food – it is also a medicine. Do not consume too much all at once – it is very very cooling to the body and can give people the chills (that might be alright for those women who are in menopause 🙂 ).

Prickly pear is a liver, kidney and pancreas tonic – eating/drinking too much can overload the system and promote a healing crisis – the liver can detox too fast.

Otherwise in small doses it is very very good for you. Medical studies have been done on the fruit and they have been shown to arrest or reverse diabetes. The antioxidants, vitamin and mineral content is phenomenal!

Thanks for the comments, Mark – and the warning. I had read about the potentially powerful effects of drinking too much juice at once, and I think I might have experienced a bit of that myself. I am very careful with it. Cheers.