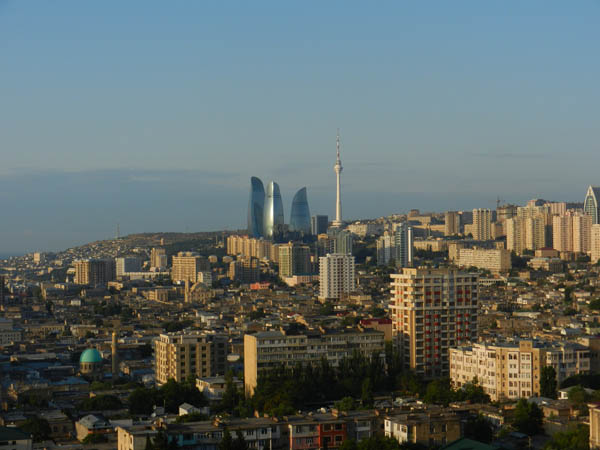 I’ve neglected this space. I started writing a blog post weeks ago, then everything changed. I had plans for many posts, but I put them on hold. I was in Bangkok, Jerry was in Laos. I was preparing for an inaugural trip to Azerbaijan, a surprise twist to our original itinerary, and a welcome expedition. The night before my flight, Jerry came down with dengue fever.

At first, we didn’t know what the fever was. His temperature skyrocketed to 104 and he lost all strength. He felt no better the next day, so he asked a friend to take him to the hospital. He tested positive for both dengue and scrub typhus, both unwelcome and potentially dangerous conditions. Scrub typhus was an unlikely diagnosis, and the test often gives false positives. But the doctor put him on antibiotics just to be sure.

By the next day, he knew for sure it was dengue, or “breakbone fever” as it is often called, for the terrible aches and pains its patients endure. We don’t get much dengue in the States, although that’s expected to change (as does the climate). There is no cure, there are no drugs. The only thing a person can do is rest and wait. It takes weeks to get over dengue—weeks in which all productivity is lost, all plans put on hold.

So there I was in Baku, looking at the skyline above and fretting. And there Jerry was in Vientiane, sweating and resting and battling one of the most uncomfortable diseases of the developing world. My energy was completely divided between worry and work. I had nothing left to spare.

I did my best to settle into the job for which I had traveled to Baku. Journalism training: it’s about the best introduction to a place and its people I could ever imagine. For 11 days, my guides were some of the most knowledgeable people in Azerbaijan with stories that shaped my understanding of the country and its history.

I went there knowing essentially nothing. Consequently, I had no expectations. Nor did I imagine what I might eat or drink or learn about the food. On a certain level, that felt good. I could slip into a new locale and experience its cuisine for the first time. I felt no obligations to understand anything about it beforehand. I was there to learn (though, ironically, I was in the country to teach). 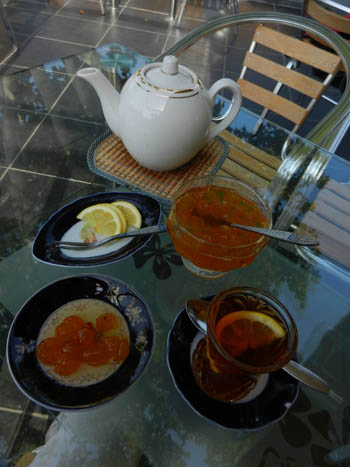 Azerbaijan is a land of tea and jam. It’s a place where people sit for long hours, sipping black tea with lemon and scooping spoonfuls of jam straight into their mouths. In summertime, the sun holds high in the sky at night, not setting until 9 or 10 p.m. Those evening hours are spent with teapots on tabletops, and all the little cups and saucers shown above. 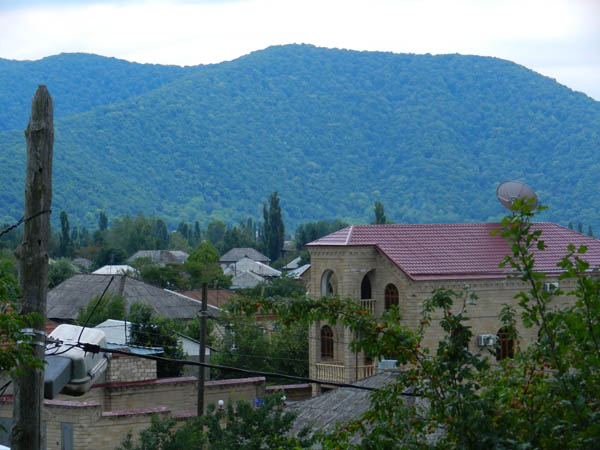 In the north near Georgia and Russia, we stayed in a place called Zagatala. Sweet-smelling mountains with clear, running streams form the city’s boundary. They remind me a bit of Montana. The air is cool and refreshing, the birds lively and full of song. One morning, one of my colleagues commented, “those mountains are killing me softly today.” 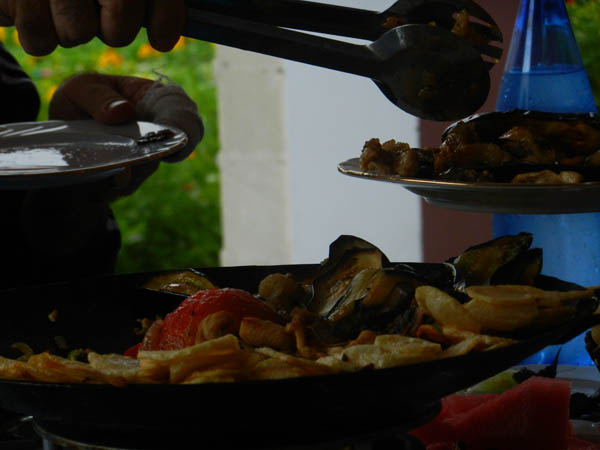 We ate all of our meals together at the seat of those mountains, in an outdoor restaurant behind our hotel. Every dinner began with cheese and salad, fresh herbs and soup. One night, we ate chicken saj, cooked on a hot, flat pan. I learned in the local market that many meats are flavored with particular types of mountain thyme (some growing high on the hill, others growing toward the middle). Mix those thymes together and they make a great tea, I’m told. 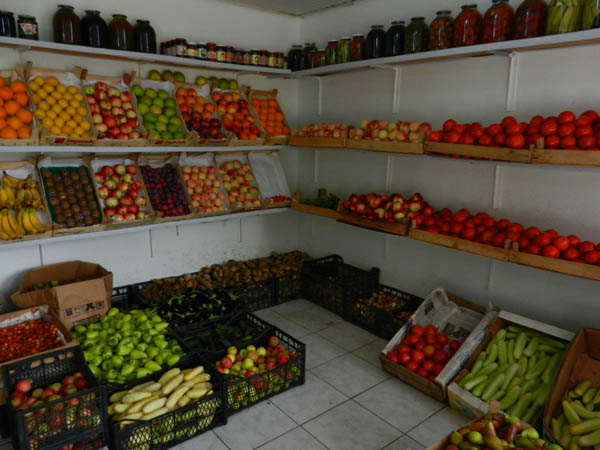 Azerbaijan’s environment stretches across nine of the world’s 11 climatic zones, giving the country a wide mix of fruits and vegetables, herbs and spices. I have never drunk so much cherry juice (or eaten so many varieties) in such a short time. Most villagers make their own jams and pickles, stretching the goods of summer through long, cold months. 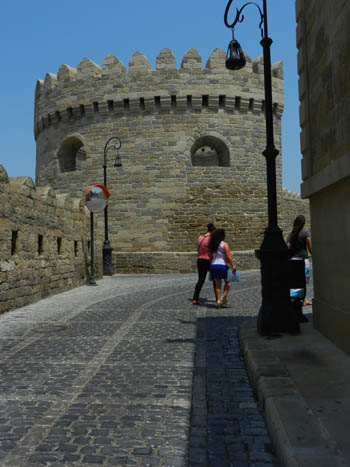 The world seems to collide in Azerbaijan. This country sits on the Caspian Sea, at the edge of Asia, Europe and the Middle East. Baku, the capital, is a medley of architecture, ancient and modern. It’s home to some of the world’s most stunning new skyscrapers. But the Old City dates back to the 12th century, possibly farther. 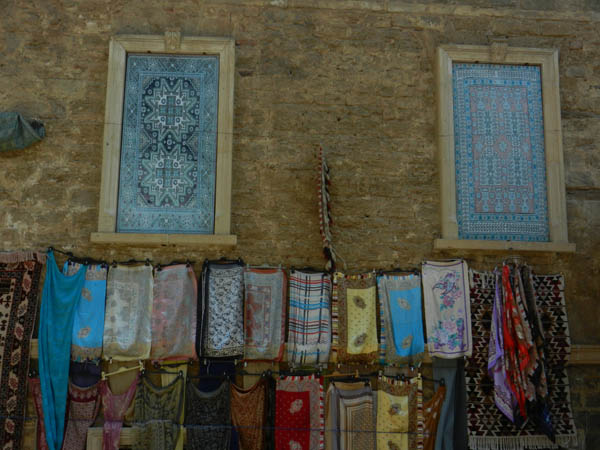 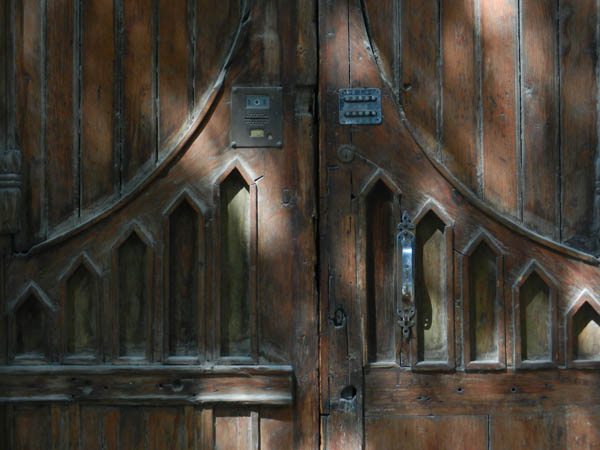 I love the doors. I spent a few days wandering the old streets and snapping pictures of so many doors and all their interesting latches, handles and locks. 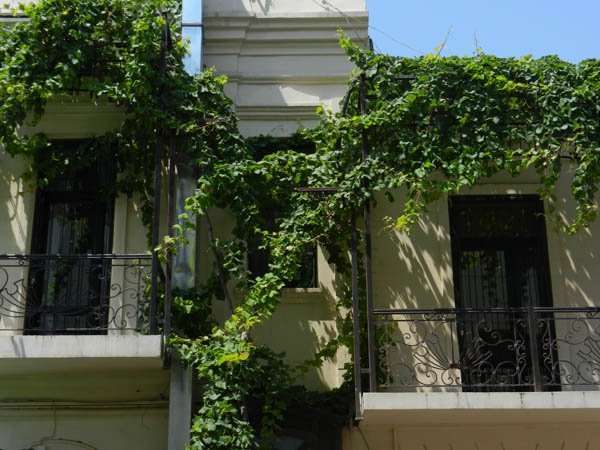 In other parts of town, the buildings are draped in grapes. Fruits dangle from porches, signs and electrical wires. The leaves are collected and preserved for the country’s vast array of dolmas (more on those later).

And at night, the city thrives. The sun sets late, as do the people. The streets are filled with restaurants, cafés and a thousand types of light.

I have many more stories to tell—from Azerbaijan, Laos and Cambodia (where we are again for a few brief days). Jerry is shaking off the last bit of fever fatigue, taking long naps and refueling with food. It’s been a long, fascinating few weeks.

And tomorrow, our plans take us even farther afield. We’re heading to North Africa and Europe for a much-needed vacation in places neither of us has seen.

I hope it sticks.

But sometimes, plans have a way of changing. I’ll keep you posted in due time. 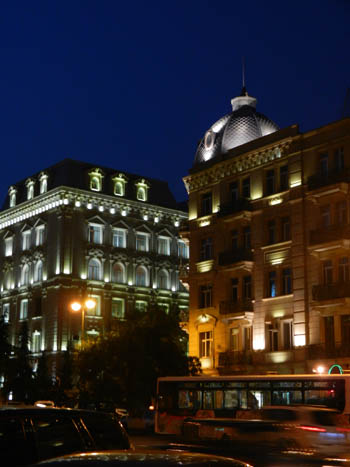 2 replies on “The Unexpected”

Thanks for taking us with you to Azerbaijan,Karen. I’m so glad Jerry is out of danger.

Life is full of unexpected detours, is it not? Interesting and scary, those little back alleys of life, full of lovely and painful and memorable experiences. And as the road sign says, “Expect Delays!” (I wrote a little bit about that here http://www.burningdownthehouseblog.com/expect-delays

All my best to you and Jerry, and I’m looking forward to seeing you in Colorado this fall. Rest well on your vacation!

Wishing you less fever, and more jam and tea,

– Andi (with wags from Nellie)

Sorry to hear about Jerry getting dengue fever, but hope he is doing better now and on his way to a full recovery. Very interesting stories and tidbits about Azerbaijan – a country I know just about nothing about. Nice to see the variety of fruits, vegetables and herbs – and spoons of jam! Have a great upcoming trip to North Africa, looking forward to more updates.