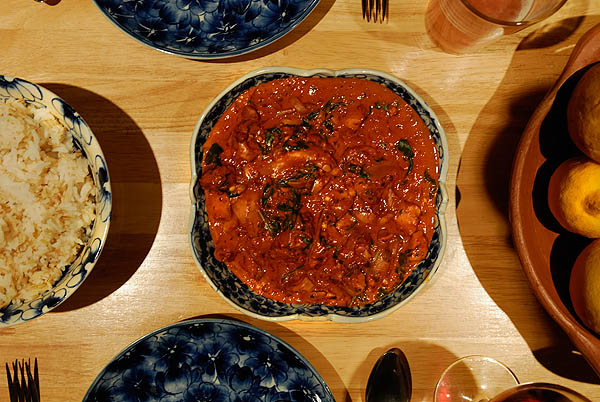 I believe this is how many memorable recipes are born—of accident, of unintended consequences. As you might know, we received a tajine for Christmas, and I’ve had great fun concocting new dishes. We did well with lamb, apricots, prunes and almonds. We didn’t do so well with chorizo and chickpeas (it wasn’t bad, just not the consistency I’d imagined). And this whole Great Moroccan Experiment has prompted me to preserve a couple of jars of lemons—homegrown Meyer lemons from the in-laws’ tree—in two distinct styles: plain Moroccan with salt; and aromatic Indian with spices removed after one week, fried, then returned to the jar for another month of sitting. (Stay tuned. I’ll blog about the lemons when they’re ready.)

So I began last night with grand plans. I even thought of cracking open the Moroccan lemons and giving them a try. It’s time. They should be ready. But then I got lost in a slew of emails, and the hours passed. By the time I reached the kitchen, I just wanted to cook and eat—not enter another phase of the tajine trials.

I had Alaskan cod, thawed and waiting. I had spinach, onion, garlic, chile and fresh lemon (from a friend-of-a-friend’s tree in Arizona). And I had parsley, oregano and thyme from the garden.

Here’s what I did: I made harissa with a few extra ingredients (soaked a big handful of New Mexican red chile pods in boiling water; then blitzed with five small cloves of garlic, a tablespoon each of cumin and coriander, a pinch of salt, an inch of peeled ginger, an inch of peeled fresh turmeric). The thing is, I cook by mood; and my mood often shifts mid-stream. This can be annoying, and it can be exciting. I could feel myself drifting away from North Africa and heading more toward Southeast Asia, then veering back again.

I fried a sliced onion in the tajine and added the fish (cut into bite-sized pieces), about a cup of the harissa mix, half a cup of chopped herbs (the parsley, oregano and thyme) and a good pour of water so there was just enough liquid for everything to simmer. After a few minutes, I added two big handfuls of baby spinach and the juice of one lemon. I tasted. It needed something… but I couldn’t quite pinpoint what. So I asked Jerry.

He stuck a spoon into the simmering stew, and that’s when the accident happened. He’d been munching on peanuts for the previous few minutes, and when he took a spoonful, it was like adding a dollop of peanut butter to the tajine. He tasted, and I watched his eyes.

“Peanut butter!” he said. “That’s what you need! Because that tastes amazing.”

Whaaaaaaat? No, that wasn’t what I was thinking. But then again… it made sense. I mean, peanuts fit into all sorts of North African stews and Southeast Asian curries, thereby marrying those two culinary moods. So I grabbed the jar (chunky, organic, no additives, no sugar, no-nothing-extra) and stirred a few dollops into the tajine. Yum. I added a little more. And then we decided the whole concoction needed just a little sweetener, so we shaved a bit of palm sugar into the mix.

That, dear friends, was one tasty tajine. And I never would have thought of adding peanut butter had Jerry not been snacking before tasting.

2 replies on “The Peanut Butter Accident”

Great story about the peanut butter and a magic ingredient! What type of tagine cooking pot where you using? Is it a traditional terracotta one or one of the new contemporary designs?