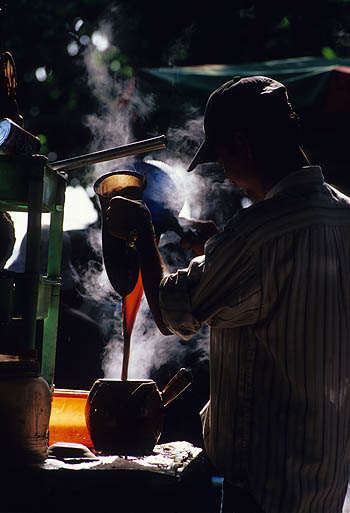 A sleepless night recently led to reminiscing about becoming a food writer. That story is now in The Faster Times. It recalls my early proposal for an article on a Phnom Penh coffee shop. Gourmet eventually bought that story, but ran only a fraction of the piece as commissioned—all writers understand the constraints of space. The original version of that story is posted here. Click here for a full gallery of Jerry’s photos from the coffee shop. 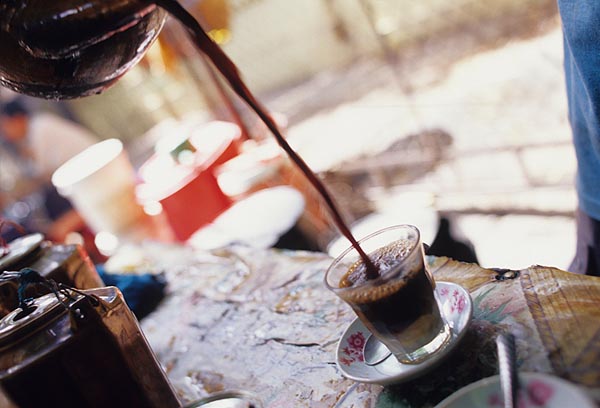 Ta Rey, a young man with chocolate-brown eyes and a winsome smile, doesn’t just pour coffee each morning — he performs it. He’s perfected a rhythm with kettle and cups, milk and sugar, ice and fire. In an elegant waltz, he streams boiling water through a cloth bag full of fine grind, into an old Chinese pot. Then again and again, with arm raised high, he pours that brew through the bag, building its strength each time. When it’s thick, nearly black, he swirls the coffee over sweetened condensed milk. With a swing of his hips and pinkie finger extended, he sashays the cup to a customer. Then back to his stove to make another round.

Ta Rey caters to a clientele of motorcycle taxi drivers and pedicab cyclists, farmers and veterans, and a fair number of unemployed Cambodian men. They hunch over tiny tables on plastic stools near an old Buddhist wat flanked by tamarind trees. Their wives are at home, or peddling foods in the market, or simply not here. Such is a Southeast Asian morning.

This place has no name; it is one of hundreds typical of the Cambodian capital, Phnom Penh. Men sip their drinks of choice — coffee with milk, steamed milk with sugar, ice with either — chased by strong green tea. They smoke and chat over working-man’s fare: packaged ramen seasoned with sharp chile and wedges of lime, topped with shaved beef plunked raw into the simmering broth. Morning-fresh bread, a French colonial leftover, is dunked into shot glasses of milk or tea. The bill at this shop never amounts to a dollar; a cup of coffee, just 12 ½ cents.

A block away, Army generals, politicians and tycoons hobnob on the patio of a fancy new restaurant, their Land Cruisers parked out front, bodyguards standing watch. But here: here is the picture of average life, of average Cambodian men starting their days.

Customers drink casually, reading the morning paper — if they can; many cannot — and talking of politics or the minutiae of life. They nod toward foreign restaurants lining the riverfront nearby and mention an astronomical price, $1 a cup, for a mediocre brew. But the coffee here on the street is robust and zippy, grown in the highlands. It’s much better, they insist. 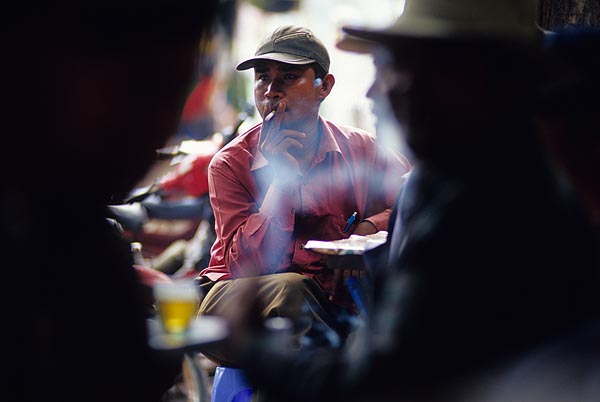 Street coffee is ritual, a social imperative, in Southeast Asia. Everywhere — Hanoi, Vientiane, Kota Bharu — sidewalk tables beckon early risers. It’s the interlude between work and home, home and school; or simply, morning and the rest of the day.

My husband, Jerry, and I have frequented this little spot, on and off, for a couple of years. We are the only foreigners; I, the only woman except for Ta Rey’s sister and mother, who work here too. But we’re always welcome. “The Buddha invites you here every day,” a wrinkled old pedicab driver tells us. We oblige, for the conversation, and the spectacular coffee – oily, rich, too bitter without condensed milk, perfect with it. Just a thimble-full could jump-start a car. We always drink two cups each.

Ta Rey’s father, Sam Piseth, started this shop several years ago. He brought his family to Phnom Penh in 1993 from an area of southern Vietnam called Kampuchea Krom. They are not Vietnamese. “I am Cambodian in my mind,” he says. Three hundred years ago, Saigon was a Khmer fishing village and all the land around it belonged to Cambodia. Khmer people today think it should be so again.

Sam Piseth came here, escaping Vietnam “because socialism is very difficult to live under.” This shop offers a meager but sustainable living. He serves no highbrow food, and ambiance is lacking here on an unpaved street with beggars and garbage and sewage back-ups. That’s life for all but the Cambodian elite.

Sam Piseth started his business on the sidewalk beneath trees and umbrellas. Every day a cop would stop by, demanding a 75-cent tithe — typical in a country where a policeman’s monthly salary runs $10 or $20. When Sam Piseth eventually saved enough, he moved across the street, renting a sheet-metal shack with three walls for $80 a month. He bought a TV. And now, an ongoing run of pirated Chinese chop-sockey videos keeps customers coming all day. Most everyone can afford a cup of coffee or bowl of soup. And the tea is free.

“People are very poor,” says a 65-year-old man named Ma Roeun, through a hodgepodge of gold and rotting teeth. “But the government is very rich,” and he pantomimes, stuffing his fingers in his shirt pocket.

It’s a common lament: a government corrupt and negligent. Education, justice, health care, infrastructure — all in tatters, still, since the Khmer Rouge war ended in 1998. And so, it is not surprising to find this morning rendezvous infested with rancorous talk: bad roads, poor harvests, no money, the 2003 election and subsequent political stalemate. And little hope for the future. Case in point: Ma Roeun is past retirement age, driving a motorcycle taxi for about $2 a day. He wants to invite us home, but says his house embarrasses him. Before war, in the late 1950s, the United States Embassy certified him in mechanics, a good job. He lost everything in the 1970s, including the certificate. “Oh, Pol Pot time, very bad, very bad. Just a handful of rice,” he says. “I got very sick.”

It’s the scourge of Cambodian memory, and everyone who lived through it remembers well. Some here even fought as Khmer Rouge soldiers — but the past is past, and everyone sits at the same table these days. “Now we have the peace,” Ma Roeun says.

Peace, born of scars: missing legs, gouges in arms, chests dotted with blurry-blue soldier tattoos thought to ward off bullets and bad luck. Invisible wounds, too. “On the inside, I suffer because I don’t have enough money to feed my family,” says a man named Nat. He supports a wife and five kids on $1.25 a day.

This cafe is Nat’s morning routine. Nothing remarkable, just life, as it is all over Phnom Penh. The TV blares, the kettle steams, the early sun cooks the city. 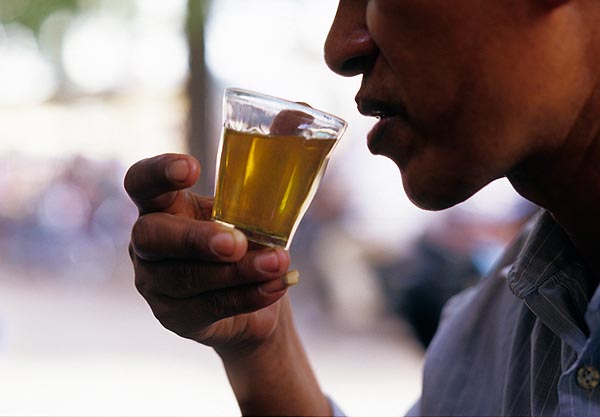 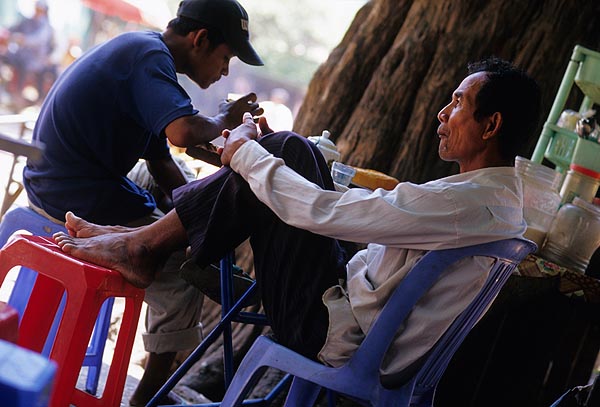 7 thoughts on “Insomnia, Nostalgia: Notes on Becoming a Food Writer”