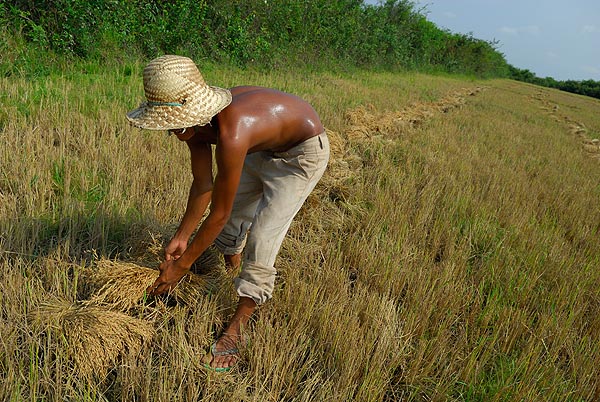 So many minds, so many wheels turning in thought. That’s the beauty of campus life: the vast access to lectures, readings, forums, panels, discussions.

This week, I had the privilege of hearing Miguel Altieri, an agroecology professor visiting from Berkeley. He said something I don’t often hear in academic and scientific circles: world hunger has nothing to do with global food production.

He said it, and I did a little dance inside—because that is precisely what I have seen, for years, in developing societies. The biggest problem I had last year studying food security was that so many experts talked numbers and technology—but few talked distribution. Farmers can grow more food, but that doesn’t mean the poorest, hungriest people will get to eat it.

I’ve just written about Altieri’s talk over at The Faster Times. And here, I offer a few looks at what Jerry and I have seen and learned in the Asian countryside. 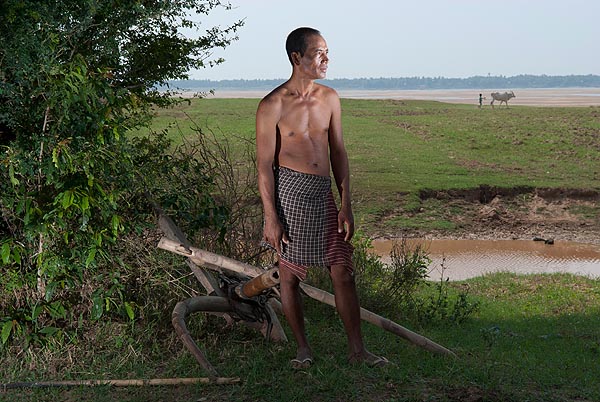 A farmer gazes across his land on the Mekong. Like his neighbors, he struggles to survive as a subsistence farmer. Many in his village have sold portions of their farmlands to wealthy buyers from Phnom Penh. It’s a quick way to make money, but villagers soon find that money gone. So they pay rent to the landowners in order to farm the acres they once owned. 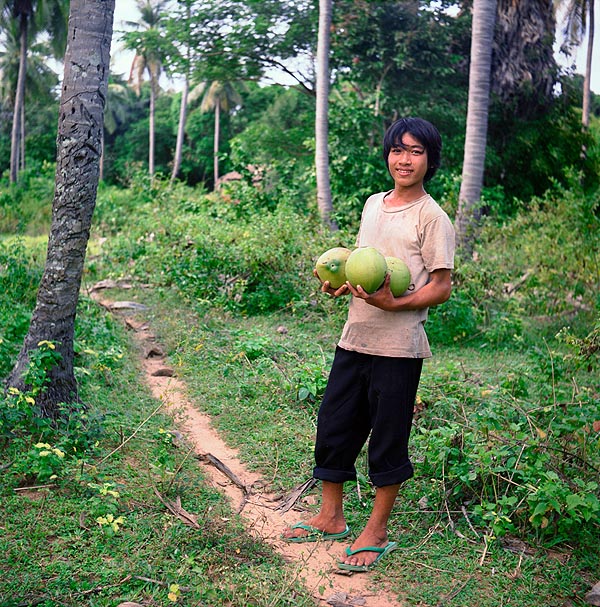 A Cambodian offers fresh coconut from his land on an island slated for hotel and casino development. 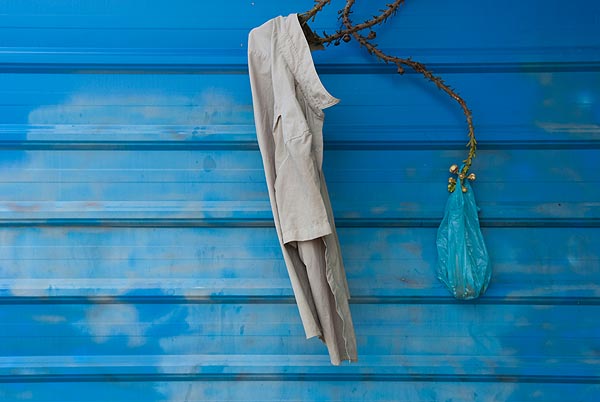 A farmer’s shirt and lunch hang from a branch on the roadside in Phnom Penh. The farmer went to the capital to protest against land grabbing, which has forced many villagers from their farms. 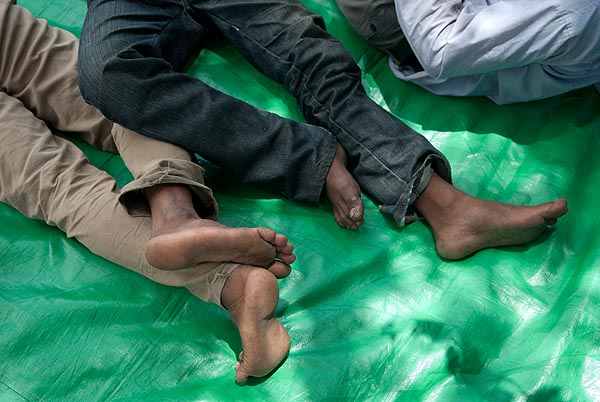 Cambodian farmers sleep on a Phnom Penh sidewalk. They went to the city to protest the loss of their land. 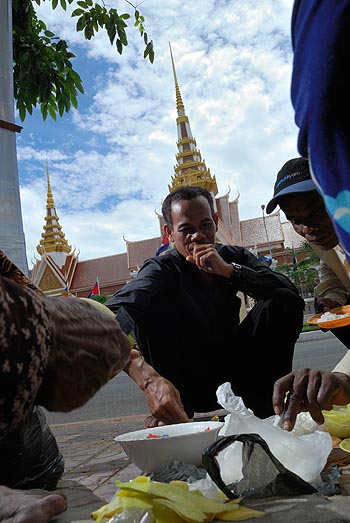 Farmers, dispossessed of their land, eat lunch on a Phnom Penh sidewalk. 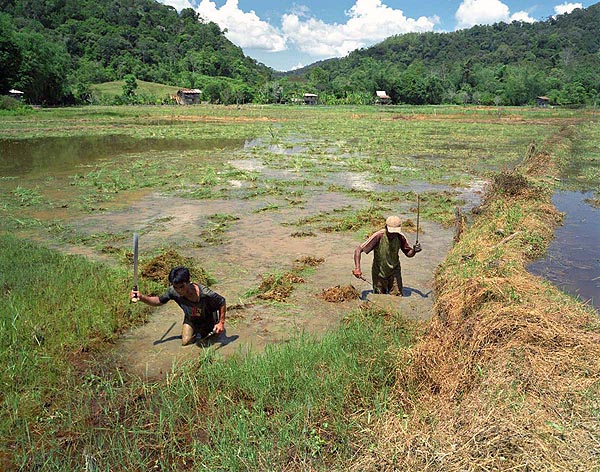 Farmers in the Kelabit Highlands of Malaysian Borneo are among the world’s most “food secure” and “food soveriegn” people in that they grow, hunt or forage almost everything they eat. But their lands and lifestyles are threatened by logging companies pushing roads into the jungle, and palm plantations that have replaced former old-growth forests. 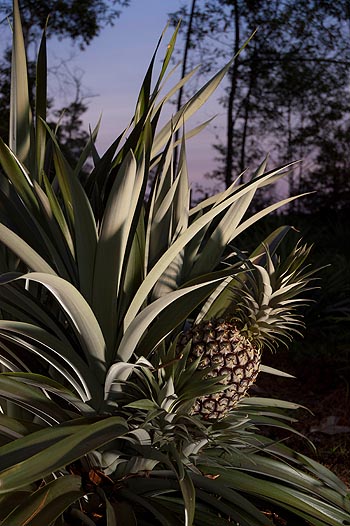 Pineapples grow in the Kelabit Highlands. Local legend says they are among the tastiest in the world—but they lose their flavor if taken out of the Highlands. 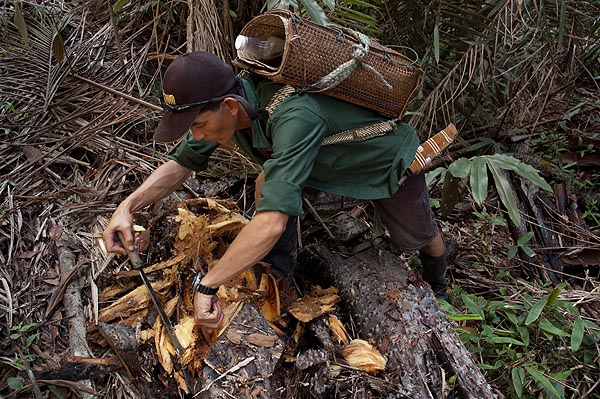 A Kelabit man searches for grubs in a rotting palm. These and other jungle foods will disappear with the forest when it is logged. 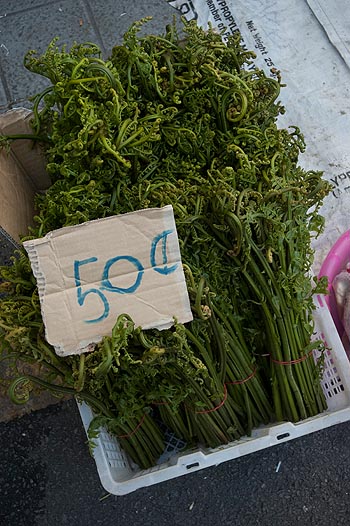 Jungle ferns are sold in a city market in Borneo.

So much of the world is hungry. I thank my lucky stars for all that I have.

Souavarat, you are so right. Last week I bought WAY too much food at the farmers market – everything looked so fresh and tasty at harvest time, I couldn’t help myself. But Jerry was out of town, I had a busy week, and I couldn’t possibly eat it all. I froze big batches of tomato sauce and chicken soup, but still, a few things went bad in the fridge. I cringe every time that happens. I think of all the people we’ve met whose dinners regularly consist of rice, fish paste and chili sauce – if even that.

I think because of their experiences back in Laos, my parents are always never without bags of rice. I mean 50 pound bags of jasmine rice and sticky rice. There’s always 10 to 20 bags at all times. During the summer their backyard is a jungle of chilies, tomatoes, cucumbers, summer and winter squashes, various greens, bitter melons, etc. I was never hungry growing up and that’s thanks to them, and because of their experience with hunger.

I think it is so important Karen to share the experiences you talk about in this post and it’s a wonderful metaphorical way that you chose to emphazise your statement with the use of these great images. I especially like the one with the farmer’s shirt. This image and what you say about it really makes me think twice! Wonderful post!

Interesting. I always thought the last year global droughts had too do a lot it.

World hunger a billon for a billon http://www.youtube.com/watch?v=6jSBW0BOPqM&feature=youtu.be

You are right. When I thank my lucky stars that I have always had enough to eat (and sometimes too much), there is also a huge feeling of guilt that that is not true for most of the population in the world. It’s sickening to a point. There is enough food. We just seem to have forgotten how to share it.

With some countries over eating, and some under eating, does it all balance out? Is there enough food in the world right now for everyone to have enough?