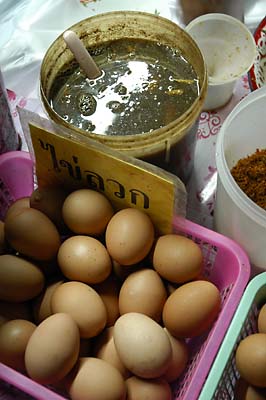 Budu. I love it. I just want to say the name again and again, really fast: Budubudubudubudu. Now wasn’t that fun?

And what in the heck is budu? It’s that stuff in the bucket above, the black bubbly muck (eggs have nothing to do with budu, they just happened to be there on the table). It’s another in a long line of fermented sauces and pastes, right there on the shelf with nahm pla raa, prahok, gapi, belacan and other notoriously stinky Asian condiments and flavor enhancers made from fish or shrimp.

We ate a fair bit of budu in Pattani, in the largely Muslim south of Thailand, where the people in many ways share more in common with Malaysians than Thais. The people speak a distinctive Melayu dialect, and they trace their history through the Kingdom of Pattani, which was annexed by Siam in 1902. The particulars of that history are topic for another conversation. What I want to discuss now is budu, which is so stinky, even northern Thais frequenlty scrunch their noses at the smell, according to our excellent guide, Khun Wilaiwan. She was kind enough to translate a budu recipe for me. First you need to get on over to a market with straight budu for sale. I’m betting any odiferous fish sauce-like product will work, if you live in an area without budu. Then, she says:

Put a cup of budu into the pot. Add some kaffir lime leaves, a few lemongrass stalks, 1 tablespoon of tamarind, and 2 tablespoons of palm sugar to season it. Boil all ingredients on medium heat until well-boiled and cooked. Let the sauce cool and put it in a well-covered container. Keep it in the refrigerator.

Use it as you see fit.