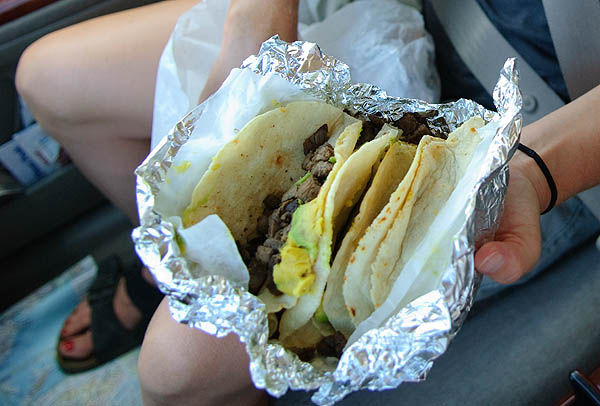 One order of Texas sirloin tacos.

When we first moved to Cambodia in 1998, Jerry took a stroll through the neighborhood and came upon a vendor beside her hot, oily wok. She was selling fritters. He didn’t know exactly what they were or what they were called, but he was interested. Since he didn’t yet know a lick of Khmer, he waved a dollar and raised a finger to indicate he wanted one. He smiled, and the woman smiled back. She put a hot fritter into a bag. Then she put another hot fritter into a bag. Then another. And another. And another and another and another and another. She piled more and more fritters into that bag, until it sagged from such a great weight with all its greasy mess. Jerry finally walked away with at least a dozen fritters.

Something similar happened to us with tacos in Texas.

We had on our palates the taste of barbacoa, remaining since the morning’s first taco stop many miles behind us in the town of Zapata. There, we ordered two tacos and we got two perfectly tasty, spicy, rich and delicious little packages of fall-apart-in-the-mouth meat with cilantro, strong chopped white onion and a zesty salsa. But the tacos came in flour tortillas, so Jerry ate both (I tasted the insides). Yummy. But I was hungry for my own tacos, gluten-free.

So when we hit Roma a few hours down the road, we stopped at a stand with bright billowing flags that said tacos. It was a confusing place: a trailer beside a patio attached to a wooden shack on the right and a large shed-like building with a porch to the left. We started to hop out of the car when a young man in a pink shirt arrived the by window side with pen and pad. I asked for barbacoa.

So I decided to go inside to look for a menu. But there was no one inside, just a big empty air-conditioned room with a menu on the wall. I opted for a big, fat taco with chicken and cheese, and I returned to the outside counter to order.

“Oh.” The young man said it would take, essentially, forever to grill the chicken. How about sirloin instead? Or fajitas?

“No.” Big tacos only came in flour.

OK, no problem. One small sirloin taco with corn tortilla, I said. But Jerry’s eyes indicated otherwise. He reminded me how small the delicious barbacoa was. Get two, he said. No, get three. It’s good luck.

We stood outside the trailer, watching through the tiny window as the young man prepared our order. He was inside a long time. A really long time. He wrapped up one little package, then another, then another—suddenly I had visions of Phnom Penh fritters.

In the end, we got 15 tacos—three orders of five tacos, each with all the fixings: avocado, salsa, cilantro, chopped fresh onion and a whole mound of grilled onion slices.

But holy frijoles, were they tasty.

That is classic! Wish we had been there. I’m sure Tom would have helped finish them off.

I love tacos. I tried barbacoa recently and it was amazing.

Next time your in town we’ll go for Korean Tacos, my new addiction!

Thought of this post yesterday, at Maria Elena’s cafe in Alviso. (that’s not the garden spot of San Jose, but the food is authentic) The tacqueria menu is worth a visit. Lovely asada and salsa on small, chewy corn tortillas. And had to take half of them home with me.

Oh, wow. Those look so tasty! One of the things I really miss since moving to New Jersey from Nevada. I haven’t had a decent taco in 10 years.

Wow! 15 tacos. I couldn’t even imagine. They sound mouthwatering at the very least. Barbacoa is a very delicious meat. I recently tried it for the very first time and loved it. I will have to try it in a taco the next time around.

Great story! I love tacos, and I wouldn’t mind 15 tacos!