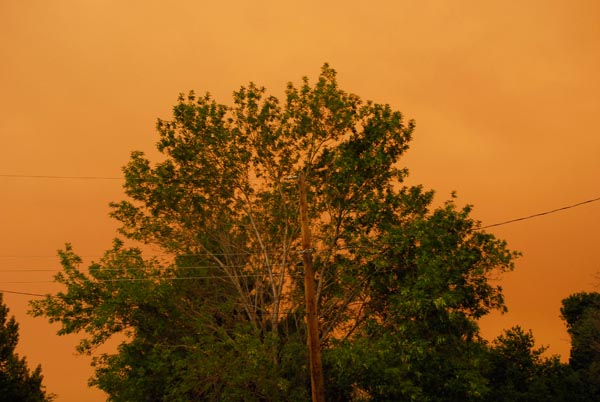 We’re choking here. As Arizona next door burns in one of the fiercest fires in state history, we’re smothered in smoke plumes visible from space. A white film dusts the air. It’s as though we’re living in the folds of a lacy veil. We wake to kitchen counters sprinkled in ash. The eyes burn, the throat goes raw. The evening sun is a crimson ball; the moon hangs like a sliver of pumpkin.

We’ve had these skies many times before, in Asia. When the rains cease through wintertime, farmers set their fields afire. For weeks that stretch to months, smoke blankets the hills linking Burma with Thailand, Laos and Vietnam. The valley around Chiang Mai, where we used to live, traps that smoke; it lingers until a heavy rain can wash the air.

We used to have a fifth-floor condo facing Doi Suthep, a holy mountain with a national park and a temple on top. Half the year, our balcony faced a verdant wall of forest green. Half the year, we saw nothing but smoke: 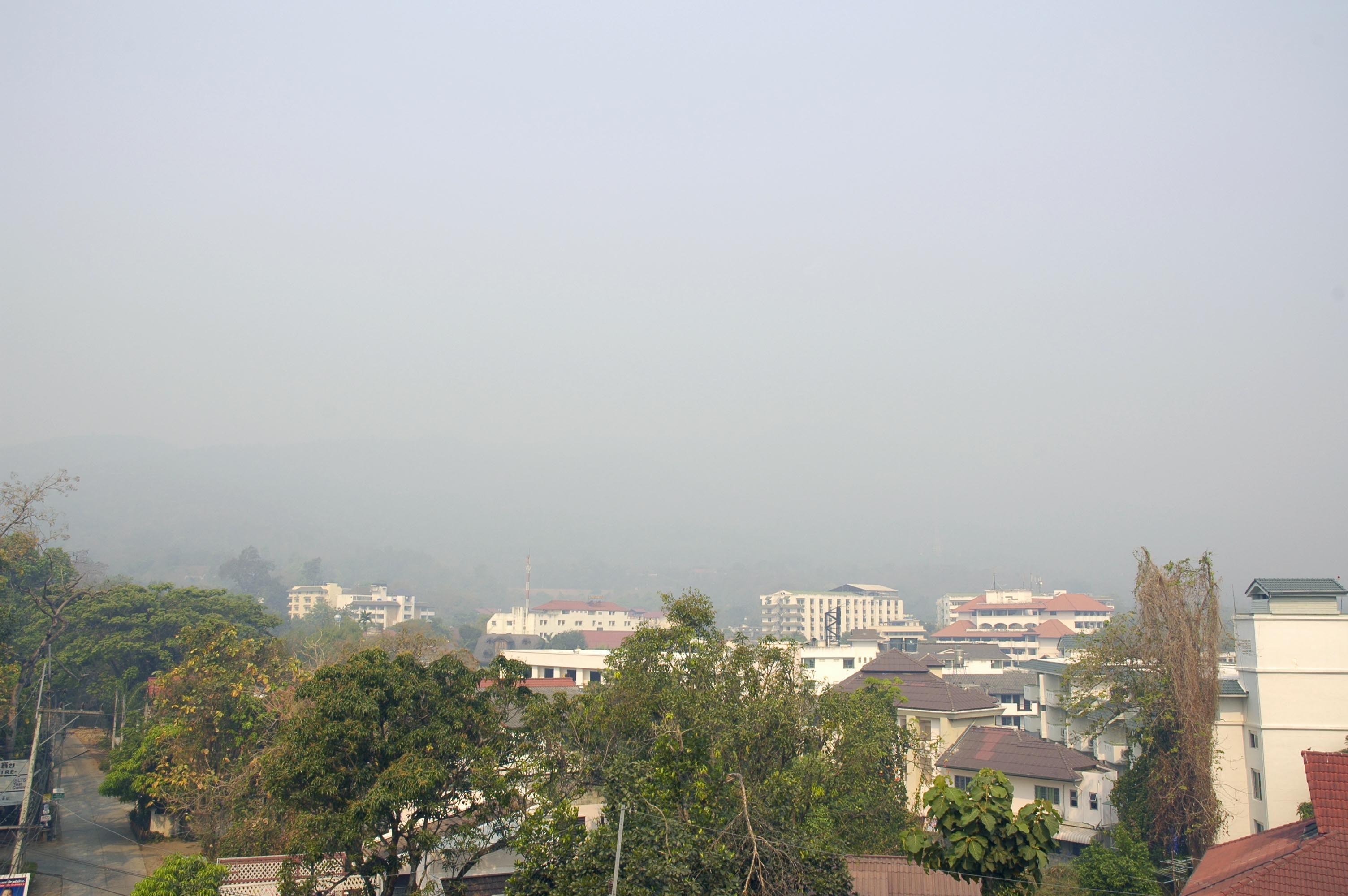 View from our old condo in Chiang Mai, Thailand. Thick smoke from agricultural fires obscures the sight of a mountain half a mile away.

Last Thursday, when I opened the door here in New Mexico and stepped into the first whiffs of Arizona haze, I couldn’t believe how much the air reminded me of Thailand. Here I was, sniffing the life of Southeast Asia.

There is something strongly evocative about the scent of fire, as though it recalls our ancestral roots. As much as I hate the wheezing, the hacking, the puffy eyes—we as humans evolved through fire. We learned to cook, and some scientists argue that makes us human.

There is a fine balance between the good and bad of smoke and fire; a tenuous line between that which kills and that which feeds our needs and desires. Indoor smoke from cooking fires prematurely kills an estimated 1.6 million people a year. I’ve written about this issue in the past.

But we also need smoke and fire. Fire kills pathogens and keeps us warm. It nourishes soil. Smoke cures the meats that sustain populations through fallow times. It fights mosquitoes carrying deadly disease. And it adds flavor to traditional meals. Fire is method, and smoke is spice.

A few months ago, I bought a package of organic Lapsang Souchong Fujian smoked black tea at the New Mexico Tea Company. When I opened the canister, I inhaled years of memories from village homes. That tea is smoke; its essence is captured in the package.

Jerry and I often talk about smoke water. If you travel to a rural village off the beaten path, anywhere in Asia, inevitably the hosts will offer a cup of boiled water from a blackened kettle. It’s not just water. It’s purified liquid infused with smoke; it’s hospitality in a sooty mug. As you sip that water around the smoldering logs, chatting through a haze that fills the room, it’s impossible not to think of the yin and yang of fire. Who would we be without it? A Laotian boy sits amid smoke in his family’s smoldering rice field, burned before the next season’s planting.

Oops, yes, thanks. I also put in a new link to a NASA map.

Sometimes I wonder how journalists ever become such, if their writing is really so good – sometimes I just bow my head in shame over what I call writing… you capture the (at least) two sides of the issue beautifully, evocatively. Thank you.

Even in my native Austria, it used to be standard practice for farmers to burn off their fallow fields. Has since been outlawed… in Hunan, they don’t do it like that, but collect fallow plant matter together and burn it. Sometimes, even in such a way as to produce some charcoal, which I can imagine to also make fertilizer (terra preta-like). Unfortunately, they do the same with quite a bit of the trash.

Thank you, Gerald!
Ah, yes, the trash. That was another issue in Thailand. Even in those times of thick smoke and minimal visibility, our neighbors would burn their trash and yard waste for entirely different plumes of smoke.

Nice timely article, Karen, in which you manage to mention the health impact of indoor air pollution (IAP). When I was working with the USAID project Child Health Research Project we had a closeup view of the contribution of IAP to respiratory diseases.

A recent post over on one of linked-in’s history groups has noted that investigation of Egyptian mummies arcoss broad societal sectors has show many of the mummies had lung damage from exposure to high levels of pollutants – probably from indoor air pollution. From priests to artisans to householders, sacred fires or simple cooking fires – they all took their toll on human health.

Odd that this is still a problem after several millenia. . .

We went to Doi Suthep this year but it didn’t occur to me the visibility issue was due to fire and smoke. Just assumed it was your every day city traffic pollution. And then you have the gorgeous mist of places like Halong Bay and in the mountains of Laos.

Thank you, Laura – how fascinating. I wasn’t aware of the mummies with lung damage, but it’s not surprising.

Genie, if you visited during the dry season, most likely smoke played a large part in poor air quality. Every year, the government warns of hazardous health effects from all that smoke… but each new year brings more of the same. Now, misty air in the mountains and bay: that’s something else entirely – and far more pleasant.