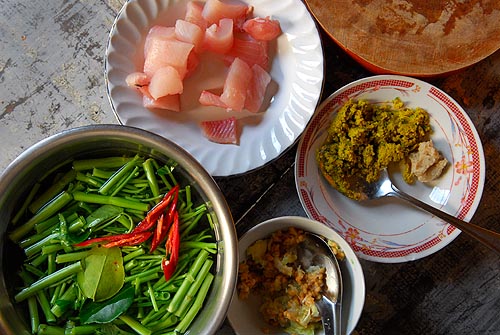 Unfortunately, I’m not feeling overjoyed about the state of our planet. For months, I’ve buried my head deep into research on the many injurious things we do to Mother Earth. My plate, of late, includes everything from CAFOs to fracking, fertilizer runoff, flame retardants, E. coli, contaminated water, polluted air, overfishing, undernourishment, obesity, climate change, chronic disaster, organic fraud, FDA regulation, floods, droughts, deforestation, pesticide drift, drug-resistant bacteria, phosphate mining and the overwhelming question of where in the world we’ll get our food in the next 50 years.

It’s too much. It’s depressing and infuriating, and I don’t want to dwell on the bad stuff today. So instead I will show you Cambodian sour soup, a seasonal variety particular to the western region of Battambang. What you see here is fresh and it’s local. We walked to the market that morning, bought our goods, and within a couple of hours we had lunch.

Perhaps you remember Toot and Nary? I went back to their cooking class a second time because I wanted to make sour fish soup. And I wanted pictures (photo hubby couldn’t attend the first round of cooking).

So on that second run, Toot, Jerry and I meandered the crowded aisles of the morning market. Toot pointed to a hard—really hard—green fruit called krasaing, which is key to the tart, tangy flavor of this particular sour soup. It’s also used with prahok, the ubiquitous Cambodian fermented fish paste. Mince the prahok and mix it with the sour krasaing, a bit of garlic, sugar and salt. Then steam in a leaf or grill it on an open fire. 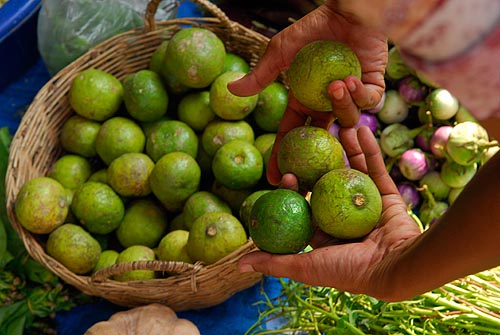 Krasaing for sale in the Battambang market.

We looked high and low and all around for slek kantrop, a seasonal leaf typically added to the soup. No luck. “We use slek kantrop for nice smell from the food,” Toot said. We would have to substitute hot basil instead.

We loaded our arms with all the necessary items and returned to Nary in the kitchen. She chopped lemongrass into pieces about 7 inches long, to be used in the kreung, the herbal paste, that would form the soup base. Now here’s the key to that green, green greenness of Khmer sour fish soup: lemongrass leaves. Most Asian curry recipes call for the stalk only, but this soup uses the leaves “because we want it to be green,” Toot said.

Nary washed a few kaffir lime leaves and a bunch of wild trou kouen, a type of water spinach that grows in Cambodian ponds. 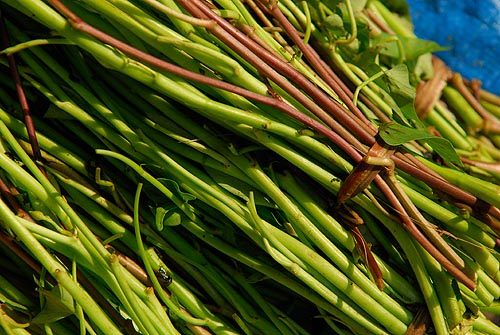 She tore off the stems and discarded the woody parts, then smashed the green stalks with a cleaver and sliced them into 1 1/2-inch pieces.

Nary said slek kantrop could be found growing in people’s yards, but not for sale in the market. “Slek kantrop is too cheap. That’s why people don’t want to pick it.” A big bundle of would fetch only 1,000 riel, about 25 cents—not worth the labor involved.

Next, using a mortar and pestle, Nary pounded the lemongrass (the equivalent of three pieces) with chopped kaffir lime leaf, a pinch of galangal, a pinch of fresh turmeric root and two garlic cloves. The kreung went into a hot wok with a teaspoon of oil, half a tablespoon of minced prahok, and a nice local snakehead fish, cleaned and skinned and chopped into bite-sized boneless, fleshy pieces. To that, Nary added 1 teaspoon of fish sauce, 1 tablespoon of chicken stock, 1 teaspoon of sugar and 1 tablespoon of water. She stirred the mixture, then added the trou kouen, a few kaffir lime leaves, 1 sliced red chile (mild, mainly for color) and about 2 cups of water. 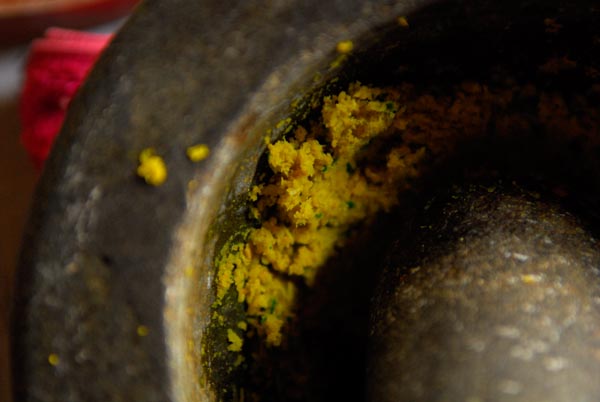 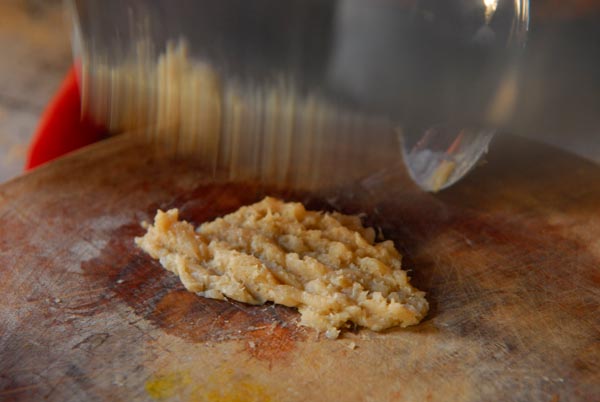 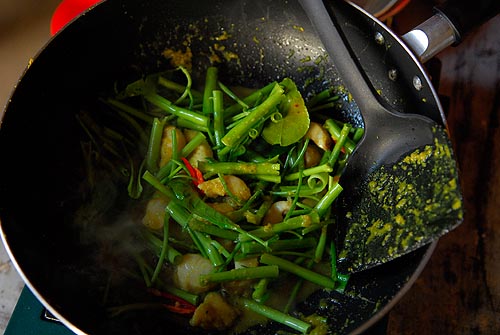 While that simmered, it was time to deal with the little cannonballs of krasaing. Thwak. Nary whacked one on the cutting board. Thwak thwak thwak. 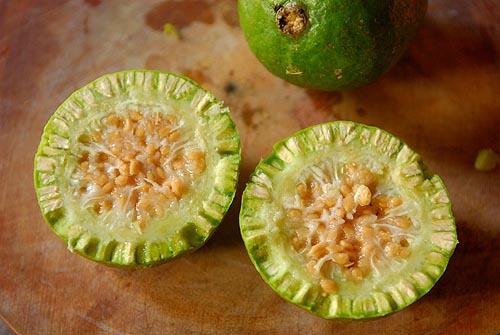 Inside were moist yellow seeds surrounded by white flesh. “You cannot go to the krasaing tree because it has a lot of thorns,” Nary said. “If you want to use the fruit, you have to get them with a stick, you know, a bamboo stick.”

She took a spoon and scooped out the seeds and flesh, which smelled of cucumber, lemon and lime. The seeds were hard like those of a passionfruit. Locals eat them whole, Toot said. But all that’s really necessary is the essence of their tart seeds, which can be soaked in the simmering broth. I put them in a strainer and dipped them into the wok, smashing the seeds with the back of a spoon. 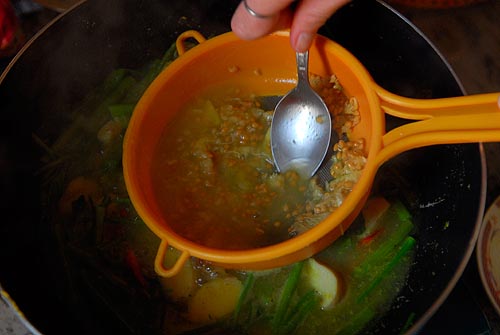 Extracting the flavor from krasaing seeds.

“If we don’t have krasaing, we use ripe tamarind,” Toot said. In Battambang, people still chop, cook and eat by the seasons, he said. “But we know in Thailand, in China, in Vietnam, they can grow everything all year in every season because they use chemicals.”

We tasted the broth for appropriate sourness, then added 2 tablespoons of fish sauce and a bit more chicken broth. Since we had none of the desired slek kantrop, we plopped in a few strands of fresh holy basil, then turned off the heat.

Cambodians have as many ways to make sour soup as they have seasonal and regional ingredients. The key is flexibility. That basil, I thought, added a fresh mintiness that played nicely off the lip-smacking sour krasaing. This was a true Cambodian soup—no sweetened up or watered-down flavors for foreigners; nothing Thai or Chinese masquerading as Khmer. 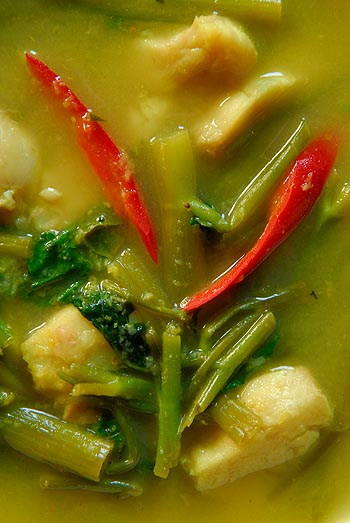 For more information on Toot, Nary and their cooking classes, check out the new website.

Mouthwatering photos and descriptions. I can practically smell it and taste it. You really brought this soup to life. I spent a pivotal month in SE Asia about 5 years ago and your posts about your experiences there always bring multi-sensory memories rushing back. Thank you. Happy Earth Day!

It really is, isn’t it? Beautiful photos – and love this dish! Every bit of it.

I absolutely love food with sour flavors I normally use tamarind or lime/lemon juice to make my soups sour. I never heard of krasaing before. It would be fun to experiment cooking w/ it in San Francisco sometime. What a delicious experience. For a pesco-vegetarian I am sure using vegetable broth instead of chicken wouldn’t hurt the end result either.
Cheers!
H

Thank you, Anna. I’m still waiting for the day I can transmit aroma through a computer screen 😉

Thanks, Belinda. If you get the chance, I highly recommend experimenting with this recipe.

Weirdcombos, yes – tamarind, lemon and lime are far more common souring agents. That’s what I love so much about this soup – something different, something very localized. And you’re absolutely right, no need for the chicken broth if you’d like to omit it.

Looks fantastic! I love sour fish soup. Tamarind pulp or lime is the usual souring agents. I love using fish on the bone, if i have the fish head…even BETTER! I love love love using a salmon head. Fatty, rich and gelatinous goes so well with sour, savory, and hot. Yummy.

Looks AMAZING! Where can I find kraising!?! I’m a conneisseur of tropical foreign fruits 🙂 I’m working on a fish dish for Paula Deen’s cooking contest and was thinking of using something exotic to make it a real unique flavor. My mission is to be one of the next Real Women of Philadelphia!! Can I get kraising in the states?

And Souavarat, I LOVE when people show so much passion about their food!

Ashley, unfortunately I’m not aware of any place to buy krasaing in the US, but it would be worth asking at your local Asian market. Otherwise, you might just have to take a trip to Battambang 😉 Also, you can substitute tamarind pulp.

First, CONGRATS for being a Saveur Magazine finalist! That’s HUGE!!! Second, I came to your site after your post on Boulder Media Women – and found it to be absolutely beautiful and beautifully written. Another CONGRATS! Finally, by coincidence I read an article today in the NY Times about Thailand’s (and Laos, Vietnam, Korea, and Cambodia) love of raw, fermented fish (called pla som), which unfortunately contain river flukes which can lead to liver cancer. Is prahok cooked or only fermented??? Be careful! And thanks for a wonderful post!

Thank you, Andy! I’ve had a great time getting to know the BMW group this year and look forward to keeping in touch. Your questions about liver flukes are important, and I will respond in greater detail after I move home next week and have a little breathing room. But suffice to say: it’s a huge problem that is often overlooked. Prahok is fermented but often cooked (such as in this recipe) before eating. Still, many people do eat prahok and other fermented fish without cooking.