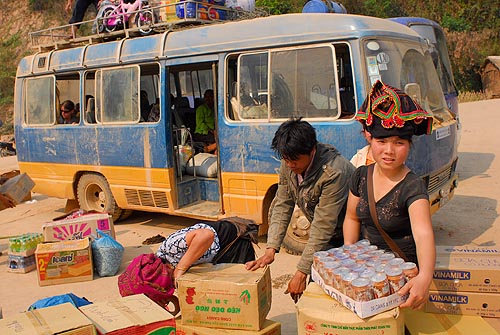 Buses stop at the Nam Ou River in Muang Khua, Laos. Tiny town it is, but it sits on a major trade route linking Thailand, Laos and Vietnam.

I’ve been thinking a lot about the journeys my dinners endure. The more I read, the more I learn, the more trouble I have shaking the numbers: an average plate of American food travels up to 2,500 miles between farm and table. That’s an astonishingly long haul that inextricably ties modern meals to fossil fuels. These grim realities are well documented in many places (if you’re interested in reading up, I highly recommend starting here). But I don’t aim to get all academic on you—not right here, right now, anyway.

I’d rather take you to a little place called Muang Khua on the Nam Ou River in northern Laos. It’s a place where road meets water and people meet each other with innumerable items to tote, trade and transport along this long route, which extends from Dien Bien Phu in Vietnam, through the Lao city of Udomxai, and all the way west toward the border with Thailand. Thai packaged goods head east on cramped, dusty buses; their Vietnamese counterparts go the opposite way. Chinese loot travels in every direction. 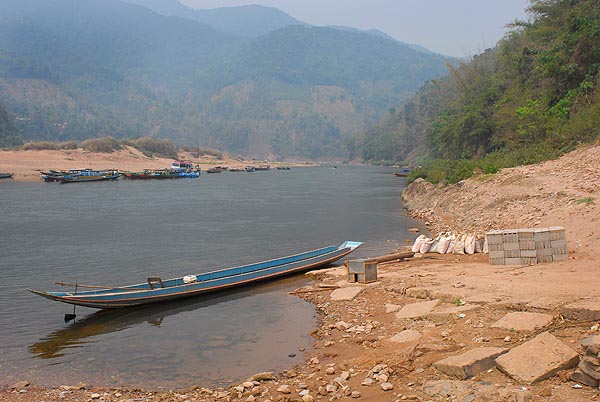 Longboat on the Nam Ou.

Pavement ends at water’s edge. There is no bridge for vehicular traffic across the Nam Ou, so ponderous loads are unpacked on one bank, loaded into longboats, unloaded on the opposite shore, then stashed again in vehicles waiting on the other side. Massive road construction complicates the whole process, requiring passengers and all their goods to sit long hours beneath a scorching sun. 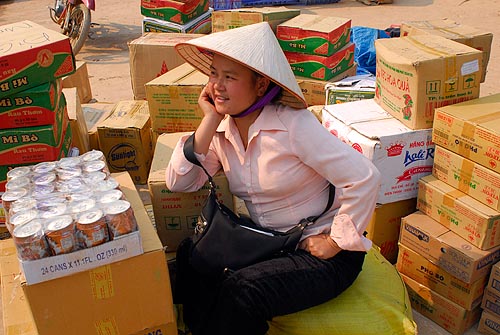 A Vietnamese trader sits with her goods on the Nam Ou.

Jerry and I wait one never-ending afternoon on the Nam Ou, watching hilltribe women in colorful head wraps as they hoist and heave boxes and boxes and boxes from the “International-Bus,” which also carries a load of foreign tourists to this juncture. Soon, the foreigners are across the river, up the hill and onto another bus angling toward Thailand. But everything else stays here, in the sun, for at least a couple of hours.

The workers all speak Vietnamese, and presumably everything in this stash has come from that direction: cans of soda; sacks of noodles, a box of something fruity from Guilin. Stacks of pho bo, mi bo, banh nuong and chocolate balls. Most disturbing are the numerous crates of sua chua (yogurt) that soak up hours of humid heat and tropical sun, entirely contrary to the labels that warn such items must be kept at 6 degrees Celsius (42.8 degrees F). It’s at least double that temperature in the shade.

The women haul all this stuff from their bus, past our bus, to the sandy ground near the water. Then they lift and lug again, into a longboat. And that is how China spreads, Vietnam spreads, Thailand spreads across the region—by the sweat and muscles of so many women (and a few men) who load and unload, pack and unpack, all these goods by hand. It’s easy to purchase a pack of noodle soup in Laos or Thailand and think nothing if its history. But, oh—the labor behind it all!

Simultaneously, a team of men pack the roof of our east-bound bus with sacks of dried rice noodles, a bag of sunflower seeds, crates of Chinese Pepsi, pineapple drinks, crispy chips and crackers in crinkly foil wrappers from Thailand—so much foodstuff aiming for Vietnam.

Cross-border trade can be profoundly nonsensical and inefficient. Noodles going east, noodles going west, and all that black sputtering exhaust along the way.

This is true everywhere.

If you travel I-25 between Santa Fe and Denver, somewhere on the vast open land, you’re likely to pass an extra-long trailer hauling a single giant blade from a wind turbine. And if you continue up the highway another hour or so, you’re likely to pass the same thing, heading in the opposite direction. Blades heading north, blades heading south. And all those miles between. 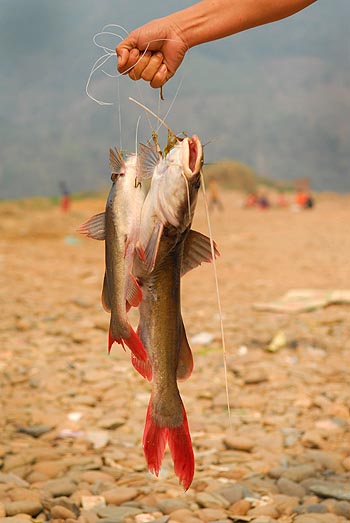 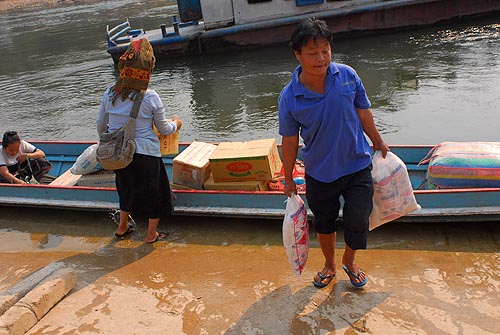 On and off the boat, on the Nam Ou. 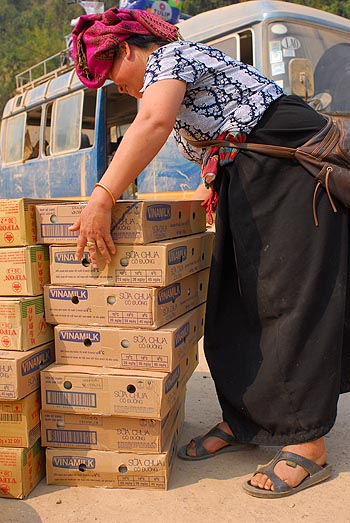 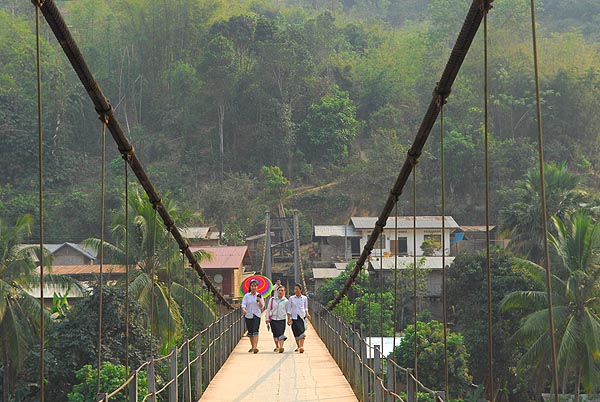 Beautiful photos – and a beautiful piece, too! It is amazing how far our food travels and we hardly think about it.

stunning photos.. and love the version of SEA slow food…

And all the culture that gets traded along with the goods . . . A liquid remnant of the Silk Road.

I think I understand the point you are trying to make about the distance that food travels and wouldn’t it be better to eat locally etc. But, in the west, doesn’t that lead one into a quandry of mass production and low food prices vs small farms (with organic and artisanal production) and exorbitant prices? In the east, all that regional trade elevates workers above the subsitence level and in many cases removes them from sharecropper bondage to the land. . .

Thanks for highlighting the issues . . .

Thanks, Belinda. You’re right (though I do think people are becoming more aware of these problems). I was shocked to learn, here in eco-minded Boulder, that only 1 percent of the food bought in this county is grown in this county.

Laura, you are absolutely right – these are tremendously complex issues, and my hope is to get people thinking and talking about them. I agree that in many cases, regional trade raises living standards tremendously – and I don’t argue against that at all. But again, it’s extremely complex and it depends on context. India, for example, has had hundreds of thousands of farmer suicides among those lodged in a continuous debt cycle as GE seeds push them out of competition. And when price enters the conversation, that raises all sorts of questions about our country’s farm subsidies and trade laws, which allow for mass production here and “dumping” in other countries. Because of subsidies, we don’t pay anything close to the real cost of mass-produced and processed food in the West. And that’s not even taking into consideration the health and environmental costs of over-fertilization, pesticides, soil depletion, runoff, nitrogen, phosphate mining…. what a headache!