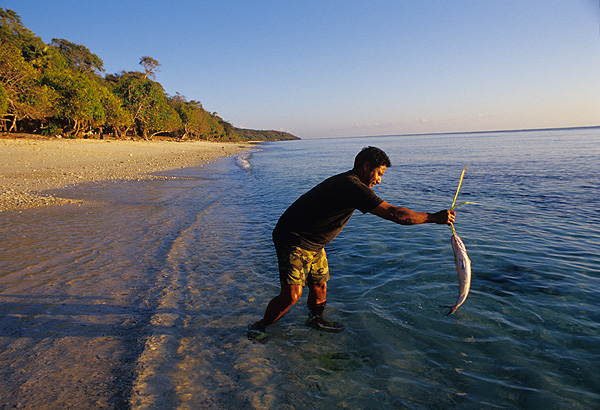 This is not here. This, above, is Valu Beach on the far tip of East Timor. “Here,” for me, right now, is Boulder, Colorado, beneath a fresh dump of snow. I could use a burst of Timorese warmth right now.

I’m traveling to East Timor in mind tonight, thanks to Sasha at Global Table Adventure. She’s cooking her way around the world, all within the confines of her kitchen in Tulsa, Oklahoma. This week, she’s on East Timor, leading me straight back to one mesmerizing weekend several years ago when we camped on island’s edge among village fishermen and a few UN workers on holiday. We foreigners were new to the scene. Fishermen have a 30,000-year history of camping in caves near the Timorese coast. In fact, that history led us to the spot above and the nearby rock walls adorned in the artwork of early travelers.

We ate one of the most memorable meals of our lives on Valu Beach. In lieu of an actual, physical return to East Timor tonight, I offer the story of our fish at the end of the road: 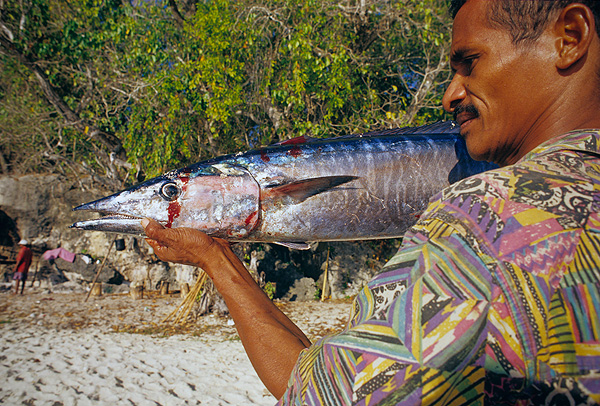 Valu Beach fisherman with his catch

Paradise sits at island’s end. Head east from Dili and rumble along a bumpy road between sea and mountains. Enjoy the ride; you’ll have these hours all to yourself. Stop for a picnic on an empty beach. Marvel at this beauty so untrammeled. But keep going.

Turn south with the road, climbing inland, where cobalt skies kiss ponies on wide plains. See damaged homes and charred buildings—the remnants of East Timor’s long, bitter war for independence from Indonesia. Visit the grave of a king whose descendants still adorn his headstone with candles. Pass a few small villages, then a lake teeming with crocodiles. But keep going.

Climb a hill and crest the world at a little village called Tutuala. Explore an old Portuguese hill station, later occupied by friendly UN policemen. Stay in this spot to watch the sun sag over blooming agave as hundreds of swallows skate on air, while the ocean churns hundreds of feet below. Listen to monkeys chattering in nearby trees. Got a tent? Spend the night if you like. The stars will shine and the air will grow thick with peaceful quiet. But first, take note of the twilight.

From here, you will gaze upon little green humps in the sea below—dozens of Indonesian islands on the horizon. Stoop to the ground and you might find a few corroded bullets, reminders of this country’s recent past. Not long ago, rebel soldiers camped in these hills and hid in nearby caves while fighting for freedom. Think about the history of these hills, but remember: the road keeps going.

It’s nearly five miles downhill to Valu Beach. You can walk or drive, whichever you prefer (although cars are few around here). If you go by foot, you will accompany women and girls en route to the one and only watering hole along the way. You will pass the turnoff to giant caves where Southeast Asia’s ancient travelers painted the walls with pictures in ochre. You are almost there. Keep going.

When you finally reach the end of pavement, turn left for solitude. There, you will find a beach untouched. Watch hundreds of little hermit crabs stitching the sand with swirling paths. Witness great herons on their evening hunt as they swoop over live coral bared at low tide.

If instead you turn right at the shore, you will find a dozen men among outrigger canoes and 3-, 5-, 8-foot tunas hanging from trees. These fishermen camp in caves along the water, spearing fish for the weekend’s trickle of visitors (rarely more than 10). International aid workers arrive in SUVs. They erect tents in the sand and plop their lawn chairs feet from the sea. They sit with wine glasses in hand as a hundred porpoises (yes, 100!) dance through the channel. Perhaps the campers will hire a fisherman for a ride to nearby Jaco Island; perhaps they will stay right here, snorkeling through this living aquarium

No matter how the day passes, dinner will hold its own. Pay a fisherman $10; get the whole damn tuna (or snapper or other catch of the day) grilled with garlic, butter and salt over a beachside flame. It is among the simplest of fish, but it is hard to imagine anything better. 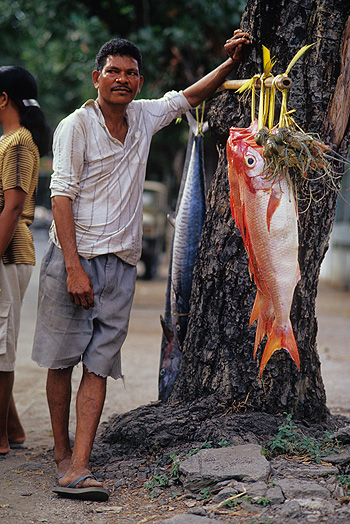 Fish for sale in the capital, Dili 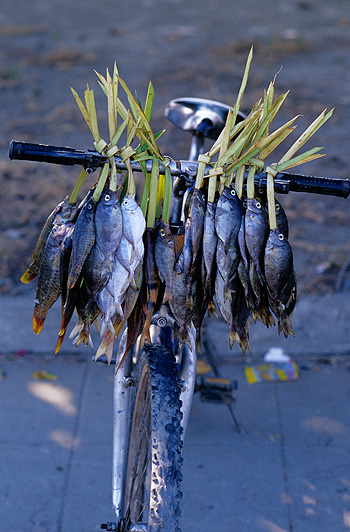 Fish on a bike, Dili

14 thoughts on “The Fish at the End of the Road”