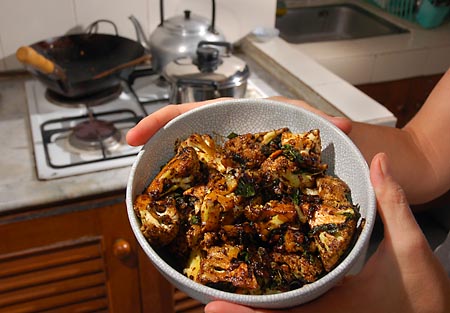 A spoonful of New Mexican chile powder makes *everything* taste better! Can we assume that Jerry is also not a fan of brussel sprouts?

Yep, you’re right on that.

Bravo! I really love the idea of turning GF-Girl’s dish into a fully Mexican affair! It sounds delicious!

Howdy, Thanks for the tip on the cauliflower recipe. My wife, a fan of cauliflower, is always on the lookout for ways to win doubters like me over to her side. Yesterday for the T-day feast, she made Cauliflower with Mustard-Lemon Butter from Bon Appetit that was a real hit.