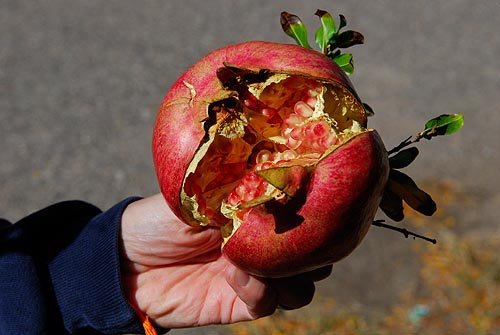 We’re back in action. I suppose it’s fitting that I return to the blogosphere with a scary story on Halloween. If you follow the Rambling Spoon Facebook page, you might know about the incident last week that landed Jerry in the ER for 25 hours, followed by three days and nights on the fifth floor of UNM Hospital. He has/had a couple of inexplicable blood clots in his leg and two pulmonary emboli threatening his lungs. Thank you so much for all of your messages, comments and notes of concern—Jerry is home now and on the mend. He’s back on his bike(s), thrilled to be moving and breathing freely. We’re lucky to have him around.

But the incident will change his life, at least for the next six months, possibly longer. He’s taking a couple of anticoagulant medications—Arixtra by shot and Coumadin (warfarin) by pill. The latter requires strict attention to diet and lifestyle.

The scary thing is, we have no idea why this happened. Jerry is otherwise extremely healthy. He had the best vitals in the ward, and doctors couldn’t explain the cause of his clots. Sometimes, that’s just the way it is. The human body is a complicated machine, and it’s amazing it doesn’t go awry more often. In this case, the long drive to and from Missoula almost certainly exacerbated the condition. But something had to trigger the clots before he traversed the vast territory beneath the Big Sky. He does not have a cholesterol problem, and these are not such clots anyway. He needed an injury—something memorable, like a gash in the leg—to have started the internal bleeding and clotting cycle. But he can’t think of a thing. In the past six weeks he trained for a 50-mile bike ride, and he did all the usual house and yard work with all the usual minor bumps, bruises, scrapes and scratches. In theory, none of that would have been cause enough.

Fascinating, though, is that he probably unwittingly intensified the clotting through his normal, excessively healthy diet rich in salads and green tea—both of which he consumed in great quantities while on the road. What? How? Why?

Leafy green vegetables and tea leaves are both high in vitamin K, which increases the blood’s clotting factors (interesting etymology: the “K” comes from the German word koagulation). In an otherwise healthy body, clotting is not a bad thing. It’s what keeps us from bleeding to death when we slice our finger while cutting onions. We need to clot. And, in fact, most people develop regular internal clots that naturally dissolve in the blood stream. We never know we have them. But when they grow large enough to lodge in the arteries and veins, threatening travel to other parts of the body (the lungs, heart, brain), they act as time bombs in the blood.

Thus, a person with clot problems needs a controlled diet that won’t interfere with the Coumadin (which actually doesn’t make the blood thinner but increases the time it takes for blood to clot). We’re thankful Jerry is in good hands. He’ll be a regular visitor to the UNM Coumadin clinic, which houses some of the world’s leading minds in anticoagulation research. His case manager pointed us to Dr. Gourmet, whose website is full of information on Coumadin diets, vitamin K and appropriate recipes for people on anti-clotting drugs.

The great news is that he need not change his tea-loving, green-eating ways. In some situations, physicians recommend that patients avoid foods high in vitamin K. But more often, in recent times, medical experts say consistency is key. If Jerry drinks a pot of tea and eats a plate of kale every day, he should continue to drink a pot of tea and eat a plate of kale every day while taking  Coumadin. His caregivers will adjust his dosage to fit the diet he already knows and loves. (If you saw our jungle of a garden—full of Swiss chard, collards, green onions, arugula, parsley, basil, sage, oregano and thyme—you’d understand how ecstatic we are about this news.)

My husband/patient finally returned home one night last week with a bag of drugs and a serious itch to ride his bike (which is fine, so long as he doesn’t crash and bleed). I returned to the kitchen with a serious itch to cook. So I spent the next couple of days in the garden, sorting weeds from greens and harvesting the last of the tomatoes and peppers amid reports of impending frost. I picked a whole bucket of pomegranates, already split, which signals their ripeness. I pounded a red curry paste for an upcoming Asian cooking demo I’m giving in Boulder.

And I went to work on a five-pound bag of organic carrots. I didn’t take pictures (and neither did Jerry). I just enjoyed the time at home, in a kitchen I rarely see these days. I juiced the whole bag of carrots with a bit of ginger. Then I turned the pulp into a soup that fed us through the week. Here’s that recipe:

Method:
Sauté garlic and onion in olive oil until soft. Add carrot pulp and top with enough water to cover. Add salt, pepper and chile (use as much chile as you like). Bring to a boil, then simmer at least 20 minutes until flavors mingle. Squeeze in lemon juice, then remove from heat. Let cool, then puree in a blender.

To make the sage butter, heat butter in skillet until browned but not burnt (as though making ghee). Add chopped sage, let sizzle a few moments and remove from heat. Serve soup warm, topped with sage butter and Parmesan shavings.

What a gorgeous blog!

The soup sounds amazing. Let’s make a pot of it here in Colorado. Yummmmm….
So glad Jerry is pulling through. Here’s to kale and green tea (toasts.)

[…] that right after I ate, I read this, and now I’m worried that my leafy green habit dooms me to death by pulmonary embolism at 23 […]

Hey Hannah, You have nothing to worry about. Eat bushels of greens – it will not plug your veins with little green corks. Your body naturally balances these things out all on its own – in my case the docs are fighting that natural balance to keep the coagulation factor artificially high (which means low rate of coagulation, actually). Eating lots of greens simply means I need to take more drugs.
-Jerry the gimp

re: what causes these things in an otherwise healthy subject does seem to be a mystery — unless you can point to an acute trauma/open wound/recent surgery of course.

one possibility to consider however is that an unresolved staph infection can cause blood clots. if your husband has further issues, esp. things like skin rashes, fever, boils/carbuncles/small blisters on the skin, swelling of legs, etc. — you might want to get him tested for staph infection (a condition which is unfortunately on the rise in our population).

the same staph bacteria that causes boils/carbuncles for example can also cause blood clots. the majority of staph bacteria taking free rides on our populations contain an enzyme that causes clotting — just a thought as most docs don’t know this connection (yet). also, most docs don’t realize that you can test negative for staph infection at skin surface/boil fluid levels (which is where they generally test) but will test positive on a deeper tissue or blood level. any opening in the skin (small scratches, etc.) can create an entry point.

hopefully, your partner will have no further issues and it’s just one of those flukey – the body just did this – kinds of things. you do have to wonder how many people are being put on coumadin long term to offset a chronic staph infection (since they rarely test for this when presented with blood clots) — the staph will then move deeper and can cause other problems at the organ level. in this situation, it is another case of treating the symptom rather than using the symptom to identify and treat the root problem (e.g. treating level 1 symptom, then later treating level 2 symptom, level 3 symptom, etc. as the condition/internal inflammation progresses).

again, this may not apply at all in your case — it’s just something to make note of in case other symptoms arise/persist.

here’s to fresh kale and green tea (and dark beer too — a powerful prebiotic/antioxidant — at least when consumption is no more than 2 pints/day).

[…] a wee bit of a scare last week when Jerry went in for his clot check (a monthly routine ever since the incident last fall). His International Normalized Ratio (INR) was way down, meaning his blood was clotting way too […]

Interesting post. I am a health nut and twenty years ago had a DVT and PE. They determined I have a genetic predisposition so I have always tried to keep my diet and lifestyle clean. Three weeks ago I started to take Greens+ every morning to complement my diet (already quite rich in leafy greens). A week ago I ended up in the ER with clots in my legs. Am now modified rest and coumadin and heparin.

The only thing I changed is added the Greens+. I wish there was more information of how much Vitamin K is too much!