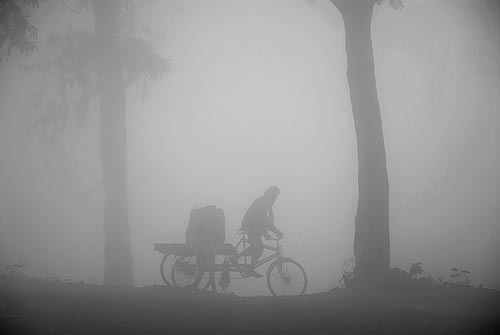 An Indian man transports water in the wintertime fog of an early morning in West Bengal.

Are we even close?

Last week, world leaders gathered in New York to discuss progress made—or not—toward meeting the Millennium Development Goals aimed at alleviating world hunger, poverty and disease. On the upside: we have a new $40 billion health plan geared toward women and children. On the downside: we’re 10 years into this 15-year agenda, and the world still reels from hunger, poverty and disease.

So what exactly is the story behind these goals? They are, according to UNDP, “the most broadly supported, comprehensive and specific development goals the world has ever agreed upon,” adopted by world leaders in 2000 with a target achievement date of 2015. The whole shebang aims to:

Since I’ve started my studies at the University of Colorado, focusing on global food security and its many tangents, I’m not surprised the MDGs have crept into conversations in just about every corner of campus I’ve visited. Neither am I surprised the MDGs have emerged in reference to food security across the spectrum—after all, if everyone in the world had access to a sustainable supply of adequate, nutritious food and clean water, we’d be much closer to seeing the above dream.

Last year, I had the great fortune to attend a UN summit with a few of my Burmese colleagues (and I’m delighted to say another batch of Burmese reporters and editors attended last week’s meeting). It’s a thrill, as a journalist, to witness history in the making; to sit among our planet’s most powerful people. But that’s not what I usually do.

Usually, as a journalist, I’m huffing up a mountain, or eating spicy stew in a smoke-filled kitchen, or drinking tea on a smoggy street, or swilling wine from a jar in the darkness of a village night. My projects almost always start with people on the ground—and then I work my way up to officials. Reporters have many styles, and that just happens to be mine. That’s how I wrote Cambodia Now, and that’s how I approach most any story I write.

So last week, when I read the reports coming from New York, I kept thinking about how the MDGs look to me. On the ground. People at work. Villagers growing food, fetching water, thinking about the next meal. The UN Millennium Development Goals are last week’s news—but they remain reality for a billion people every single day. Follow me, if you will, through a photographic view of places seen and people met in the past few years. Take a look. Read the captions. And ask yourself: Where does the world stand in its progress toward meeting the Millennium Development Goals? 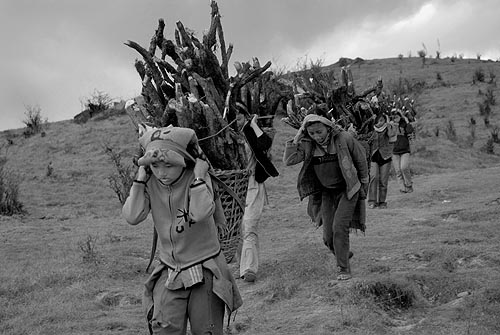 Children carry firewood to their homes on the Indian side of the border with Nepal, high in the Himalayas. There are so few trees on the Nepal side that villagers limit their cooking fires and refrain from heating their homes in the winter. 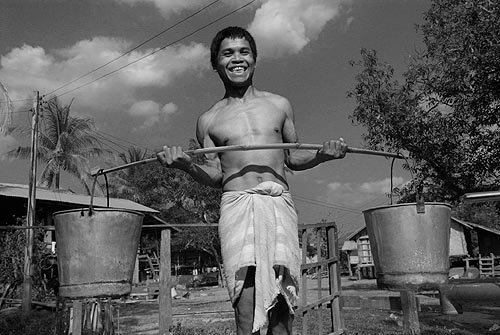 A young man fetches water from a village tap in Boualapha, Laos, one of the country’s most heavily bombed regions still contaminated with unexploded ordnance (UXO). His pails are made from war scrap dating to the U.S. bombings nearly 40 years ago. 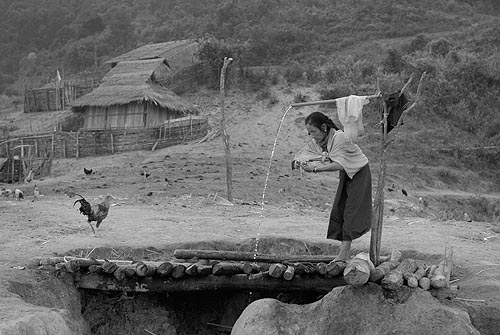 A Lahu woman in Burma’s Shan State washes at the village tap. 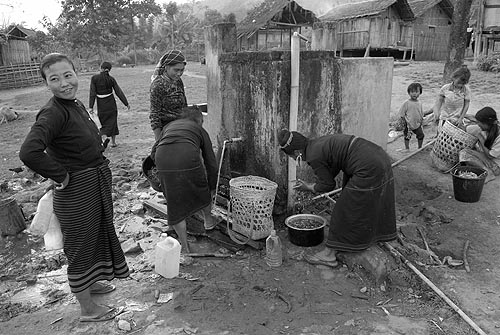 Wa women in northeastern Burma gather each evening at a communal well to clean vegetables and collect water for their nightly meal. 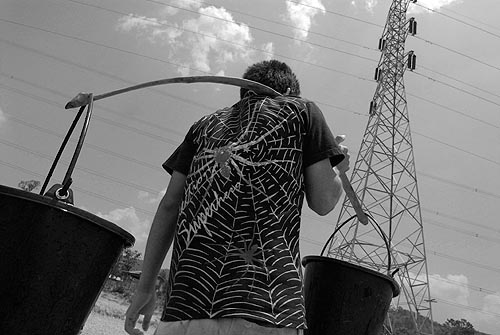 A Lao man collects water from a pond on the roadside. In the background are newly installed wires, a result of the massive Nam Theun II hydroelectric project that flooded numerous villages (now relocated) as well as a large stretch of biologically diverse jungle. An estimated 95 percent of the power generated by the 1,070-megawatt project will go to neighboring Thailand; 5 percent will stay in Laos, reportedly covering 20 percent of the country’s energy needs. 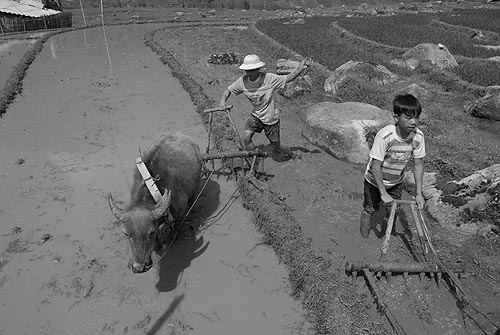 Hmong farmers plow their terraced rice paddies near Sapa, in northern Vietnam. Almost all Hmong villagers in the region use water buffalo to do the job. 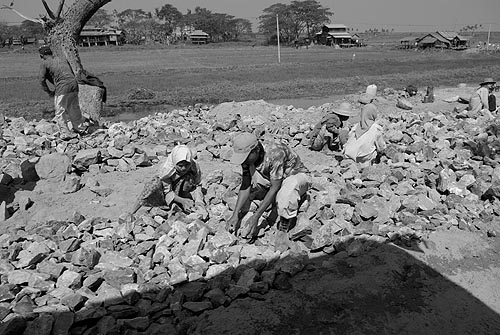 Burmese laborers collect and crush rocks along the roadside as they work to rebuild a stretch of highway by hand. 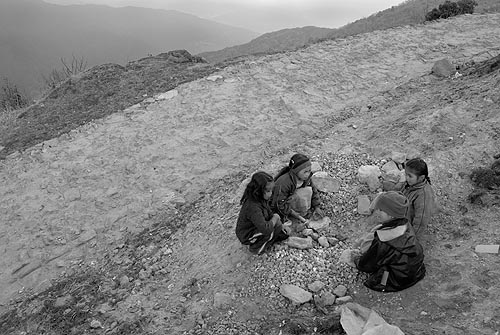 School girls along the India/Nepal border collect and crush rock on a remote Himalayan hillside. The girls say they go to school, but this is their job during vacation time. 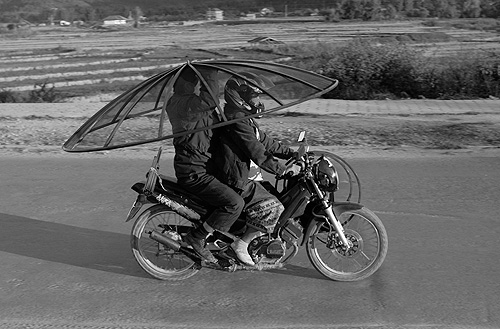 Laotians transport a satellite dish through the countryside.

Thanks for this and a reminder that something as important as this has not been forgotten.

Lots to ponder/discuss, but one question is: what’s with the hatred for ’empower’? And, I’m thinking the photos would paint a less bleak picture if they were in color!!
Phil

Hi Karen, thank YOU for not forgetting!

Hi Phil – the distaste for “empower” stems from my old journalism school days. It’s not the concept but the word itself (one on a long list of overused/cliche/trite or meaningless words and phrases we were taught to avoid). I’m not the only one: http://ldaley.wordpress.com/2007/11/27/utilize-and-other-useless-words/. On the color issue, I will pass along your comment to the photographer 🙂

Thanks for this reminder. The pictures are beautiful and haunting, and truly worth a thousand words each.

Interesting! 🙂 In Laverne’s article she’s spot on about ‘utilize/use’ and ‘interesting’… sort of like the um’s and uh’s of speaking. I was a little less convinced by ’empower’, though. Maybe because I don’t really hear/see it very much at all, but also it has struck me as being the most fitting term in a couple of areas. One is with respect to organized religion (especially e.g. mega-churches in this country): I find it classically disempowering. The other is regarding poverty and hunger- the classic approach of throwing money and food at the problem seems to mainly make the donors feel good about themselves. But, if the people are given tools that they lack to create a sustainable (this word also seems overused these days!) and dignified existence, and an environment that supports them (as opposed to, say, economic slavery), then I find ’empower’ to fit precisely. Microcredit, for instance.

Everyone has different interest, so ‘interesting’ is different to different people and therefore weak. “Empower’ may be overused, but what better words are there?

Hey DrFill,
The photos are in B&W because some of them started that way for another project (I often scavenge through other projects when gathering pix for these blog posts).
As for being bleak – well, I guess that’s in the eye of the beholder. Some of the situations simply are bleak – showing them in color doesn’t make them any less so. And some of the photos had distracting color backgrounds – turning them to B&W makes it easier to see the subject.
But, in the end, it’s more of an aesthetic rather than an editorial choice.
Thanks for looking and thinking!

I love your photos. I am a Shan artist and am compiling a book on my paintings of ethnic peoples of Burma. May I have your kind permission to add a photo of yours, (the Wa villagers) in my book? I will of course add your name and blog with credits.

Hi Feraya,
Jerry took all the photos here – he will be in touch via email. Thanks for your interest!