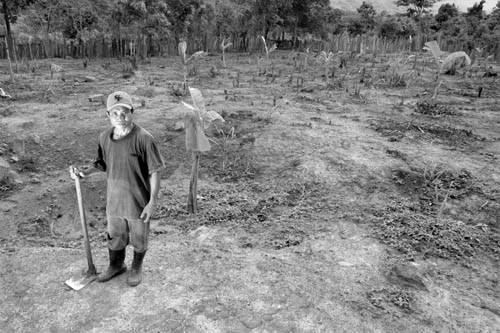 A farmer in Sepon, Laos, stands in his field, which he cleared of ordnance by himself. He said he found many munitions. The small banana behind him grows in a bomb crater.

An international treaty banning the cluster bomb takes effect today. Cluster bombs are large weapons that hold up to several hundred small explosives designed to scatter across the land when dropped from the air. They are deadly hazards to farmers in postwar societies around the world.

Farmers in Laos have faced these dangers for decades. Millions of cluster munitions remain in their soil since the U.S. bombing campaign ended nearly 40 years ago. Since then, more than 20,000 people have been killed or maimed in accidents involving unexploded ordnance (UXO). Aside from soldiers, farmers account for the majority of UXO accident victims in Laos. Note: the United States has not signed the treaty banning cluster bombs—but 108 other countries have.

My story on Banning the Bomb runs today in The Faster Times. It’s part of our ongoing project to document the effects of UXO across Laos. Earlier this week, we had an article in GlobalPost examining the many ways Laotians turn bomb scrap into tools. This is all part of our forthcoming book, Eternal Harvest: The Legacy of American Bombs in Laos, to be published next year. This work is written and photographed with support from the Fund for Investigative Journalism. 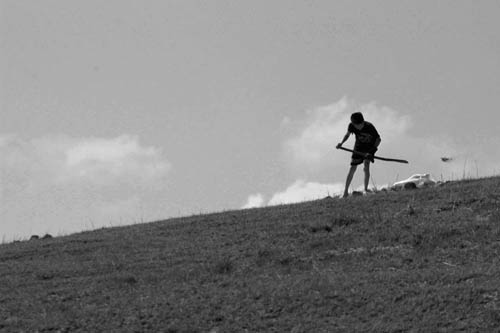 A boy in Xieng Khouang digs for ant eggs on a hillside that was heavily bombed. Many locals have found bombies nearby. When a teacher tried to warn the boy about UXO, he said he was not afraid because he had dug in the area many times before. 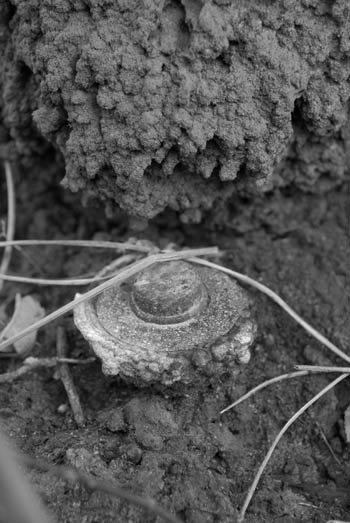 Part of a cluster munition found in a farm field in Khammouane province in 2009. Farmers placed the bombie near a tree stump in the hopes that a clearance team would return and demolish it. It was still there in late April 2010. 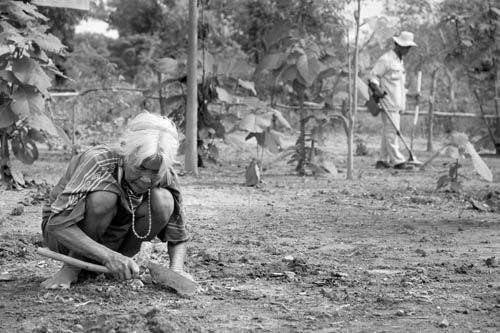 A woman weeds her garden while a clearance team searches for bombs behind her. The woman did not want to stop working. That day, the team found a bombie in her neighbor’s field. 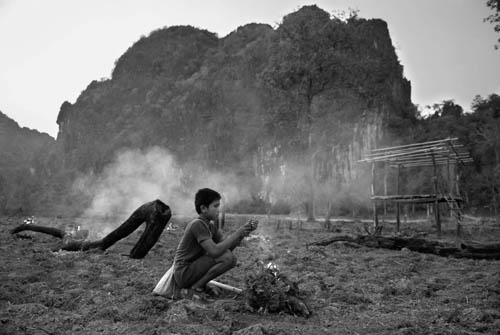 A boy in Khammoune sits in his family’s field, which they have set afire in order to clear the land for planting. Fires can cause buried bombs to explode, and many people do not stick around for the burning. Another boy in the area said he finds UXO every dry season. “When we burn the rice field—BOOM, BOOM! Explode. Every year. When we burn the field, we run away.”

7 thoughts on “Banning the Cluster Bomb”