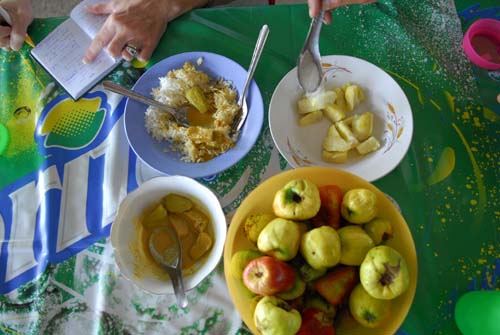 Just a photo I’ve always liked. Those are my hands in the upper left corner. I was in southern Thailand, learning about cashew apples. I’d spent the hour before exploring Krabi’s Ban Laempho Gastropod Fossil Beach—an ancient cemetery of mollusks preserved in layered beds—when lunch called my name. A few little stalls selling fried chicken and Muslim curries were clustered at the park entrance above the beach. I climbed the hill, pointed to a bin, and immediately roused a swarm of women.

But it wasn’t the nut I found in my salted-fish curry—it was the cashew apple. A vendor ducked into her kitchen and returned with a bowl of freshly cut fruits, pale yellow, some tinged in red. She sprinkled them with sugar. They were juicy, with a guava-like flavor and an endnote that sucked my mouth dry.

The women showed me a specimen recently plucked from a tree. “Here’s the flower. Here’s the fruit,” they explained. A curious thing: the nut, which is technically a fruit, resembles a green lima bean. It dangles beneath the apple, a pseudo-fruit, which swells as it grows—until it’s picked and sliced and curried by the enterprising Muslim cooks of Krabi.

There in the picture above, you can see the bowl of whole fruits beneath the sugared slices and just to the right of the mustard-colored salted fish curry.

Also, you can see my fingers in the process of scribbling. Yes—I do it the old-fashioned way. When I’m out and about and eating in the great, wide world: I write my notes in cheap little notebooks sold at 7-Elevens and local markets all across Southeast Asia. I stuff them with business cards and maps. Sometimes I sketch little diagrams to aid my notes; sometimes my pages get smeared in the curry at hand. Sources often grab my notebooks and jot information in their own language, which I can investigate further as I proceed with my story. This is enormously helpful when working across language and cultural barriers. And in these cases, a digital recorder (which I do have) or other electronic gadgets wouldn’t help. I might go through five or 10 notebooks on an in-depth article; many, many more for projects and books. The result is that my office closet contains giant boxes filled with years and years of little notebooks.

I’ve been thinking a lot about this lately, as I work my way through Nicholas Carr’s account of the Internet’s effects on our brains—the way we think, read, see and process messages. It’s a fascinating read and an enlightening examination of the way our brains change with the technology around them.

(In other ponderables, today’s GlobalPost contains our story on tools made from bombs in Laos. It’s one in a series of articles we’re doing in conjunction with our forthcoming book on UXO in Laos — a project I noted almost entirely by hand, in little notebooks.)

8 replies on “Taking Notes on the Cashew Apple”

You had me at “gastropod fossil beach”. Did you go to the beach? See the fossils in situ?

Jenny, I did – several times. The fossils were just a short walk from the beach-side bungalows we’ve rented a couple of times. The fossils are amazing – they look like giant broken slabs of concrete. Up close, you can see all the details of the shell-like imprints. They’re also covered in tiny insect-like sea creatures that scatter when a person approaches.

WOW Thailand! how talented are Thai’s and that region of the world at cooking…and that’s every day cooking which is amazing.

Thank you for sharing,
Bridget
@bridget_cooks

Bridget, you are right about that. The level of preparation and detail put into an everyday curry is amazing.

Thank you Karen for replying.

Why do you think that is? Is it a cultural issue that makes this region different? Availability of fresh ingredients? is cooking taught from a young age?

Bridget, I think it’s a bit of all the above. It’s not just Thailand, either. Across Asia, particularly in villages, girls grow up watching their mothers cook for hours (and it does take hours to pound garlic & curry pastes). Women often take care of the kids and cook while men go to the fields. (Of course, women also work in the fields, making their days incredibly long and tiring.)

In India and Sri Lanka, some restaurants require advance orders because it takes so long to prepare everything from scratch. Traditionally, of course, everything *was* made from scratch in rural areas. Things are changing, as more people move to the cities and buy ready-made curry pastes and chopped ingredients. Then again, I’ve often seen it in Thai villages today: women are making a new business by preparing those ingredients in mass quantities for sale in the markets. It’s still fresh and homemade… just made by someone else.

In Burma, however, even most city workers bring homemade lunch with them to the office. Many people simply can’t afford to eat out, so they (or the women in their lives) invest the time in preparing food at home.

Some of this, too, gets into food as medicine. Many of the ingredient combinations in intricate soups and curries have long been used to fight disease (particularly in Ayurveda). And in many rural villages today, homegrown plants are the only readily available medicine.

And beyond all that, people love great food and great flavor!

You call them cashew apples? Here we eat them with salt, and make wine out of them.

I love field work photographs, and that’s a great one! -X