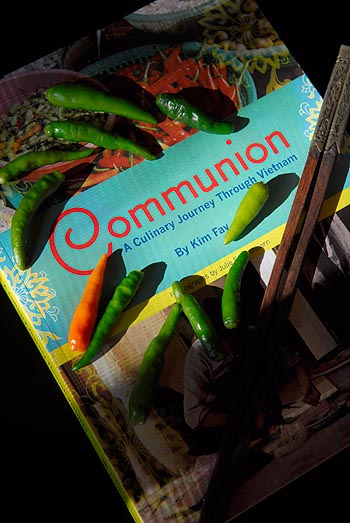 Let me begin with disclosure: this review comes with attachments. I share entangled endeavors with Kim Fay, author of the newly released Communion: A Culinary Journey Through Vietnam. Her publisher, ThingsAsian Press, will publish my next two books. And I have contributed essays to Kim’s guidebook series, To Asia With Love. Though Kim and I have never met in person, sticklers for objectivity would argue that I cannot write an unbiased review of her book.

But I can write a fair review. 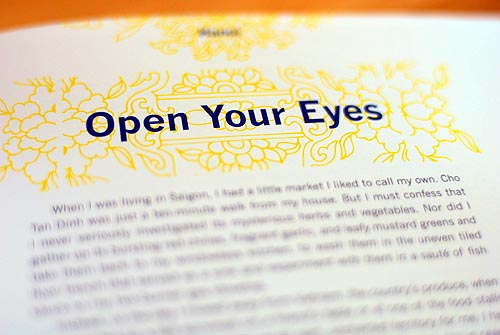 And in fact I’ve waited months to do just that. Back in October, with days growing shorter and winds colder, Kim sent me a draft of her manuscript—double-spaced type on 8 ½ x 11 paper, no photos except a rough copy of the book’s cover. But now I have the real thing, nearly 300 pages of intertwined essays and full-color photos taken by Kim’s sister, photographer Julie Fay Ashborn. It is one of the heftiest, most beautiful food and travel books I’ve seen from Asia. (The type is a bit tiny—my parents would have trouble reading it—but the photos are big and bold.)

“I thought about how much better food tastes when it fits into a narrative.” With this, Kim captures the nugget of great food writing. Ingredients are important—yes—but context is so much more so. (If you know this blog, you might notice I’ve said this before. Stay tuned for a forthcoming essay on this topic.)

Communion doesn’t simply tell us what Kim thought about the crispy fried eggplant she ate in Hoi An. Instead, it guides us through the life of Miss Vy, the restaurateur and instructor who opened her history to Kim. By the time we reach the recipe for that eggplant, “as delicate and flavorful as Miss Vy,” we know all about the chef’s upbringing, her family’s post-war struggles through Doi Moi, and her thoughts on communism, poverty and sexism. In turn, I am all the hungrier for her food. 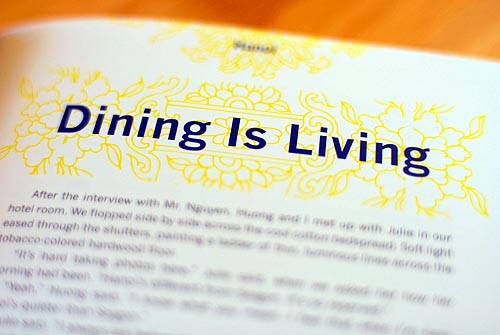 I’m reminded of Paul Theroux, who wrote years ago about how Conrad, Hemingway and the other greats “had not done Africa justice.” Their writings “ignored Africans or else made them insubstantial figures in a landscape.” They wrote of Africa with out any Africans.

I see the same today in writings on Asia. I see it in the travelers themselves, and I find it in the ever-burgeoning world of food lit. “The tourists I met when I was young were better,” a Hmong woman recently told me. “Before, they come because they love Vietnam. Now, they come because they are just traveling.” Just traveling—with iPods in the ears and eyes cast inward (or hidden behind tiny digital cameras). I don’t want to know about their fave banana pancakes or their perception of Saigon’s best noodles—not unless their opinions reflect something more than themselves.

Tell me, instead, about the woman serving those awesome noodles and how she came to be behind a steaming wok on the street. Tell me her history and ideas. Tell me how her noodles fit—or don’t—into the texture of modern-day Asia.

Of course, no writer succeeds at this all the time—but it is what I strive to do. And it is what Kim Fay has done in Communion. 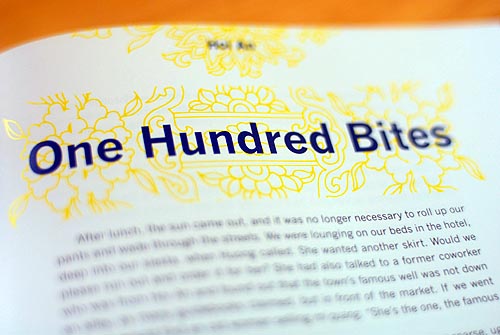 I particularly love an exchange she had with a “stylish” Vietnamese friend on the subject of a trendy restaurant resembling a series of street-food stalls, minus the grime. It’s popular with locals. “I don’t have to sit near sewage while I’m eating,” the friend said. “I can get fruit juice or coffee, or even both if I want, and I can eat all sorts of different foods. My kids can have one thing, and I can have another. Maybe it’s not the best, but we can each have whatever we like. And when we leave… my hair doesn’t smell like cuttlefish.”

There. That right there is what I want to read in a story on Vietnamese—or Thai, Lao, Khmer, Malaysian, Indian or Burmese—eating. Kim questions whether sitting at a stall, sucking on exhaust is an essential part of the street-food experience. And it very well might be for many of the glossy-eyed foreigners who write glowingly about such settings. But the vast majority of my Asian friends choose cleanliness when given the chance. They like indoor restaurants with tables and chairs, too. Imagine that.

Kim does express worry over the incremental sanitization of Asia leading to the sanitization of Asian flavor—a legitimate concern, considering the popular restaurant in question served a mediocre bowl of bun bo Hue that needed more shrimp paste. But thank you, Kim, for including your friend’s perspective. So many culinary missives fall flat on scope and view. We get street food, 24/7. But Communion covers the spectrum—from fish sauce aficionados to the “master grafter” of Dalat’s famous fruits; from humble bowls of clam rice to the haute creations of Didier Corlou. It portrays the breadth of a Vietnamese palate as varied as the people themselves.

I open books, blogs and magazines with cravings for Asian food and the people who deliver it. Too often I find, instead, another foreigner in a vacuum. I read Kim Fay and I feel I’m meeting Vietnam all over again.

4 replies on “Communion: A Culinary Journey Through Vietnam”

That is a very special post, and spot on with your point about travelling in a vacuum. If you ignore the local people, you miss the context of the food. I think Mathew Fort is good at covering this in his books on food in Italy. The Vietnam book looks fantastic

Dear Karen, Many thanks for this lovely review. I most appreciate your understanding of what I tried to ultimately accomplish—letting Vietnam’s culinary story speak through its people. All the best, Kim

Paul, thanks for the comment—and a good suggestion for equally inspiring writing on another side of the globe.

Kim, you are most welcome. I wouldn’t write it if I didn’t believe it! I think people are far better storytellers than food alone.

[…] thanks are not enough for Karen Coates’ warm and thoughtful review of Communion. Click here to go to the review on Rambling […]