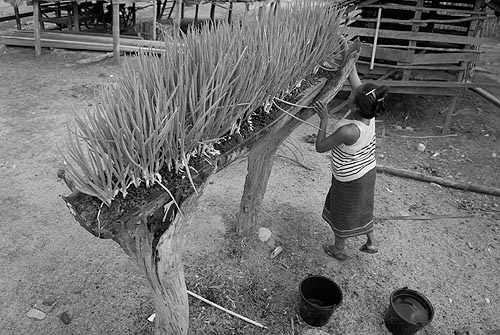 Laotians everywhere have turned war scrap into useful tools. The large metal casings from cluster munitions can sell for upwards of $40—a near fortune to many rural villagers. But some gardeners prefer to keep the casings, turning them into sturdy raised herb gardens. Village to village, province to province, Laotians insist: the bomb is the bomb when it comes to gardens. Read the story in The Faster Times. 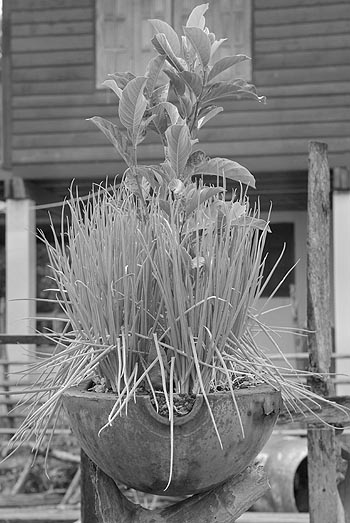 Onions grow in an American bomb casing in Gnommalath, Laos. 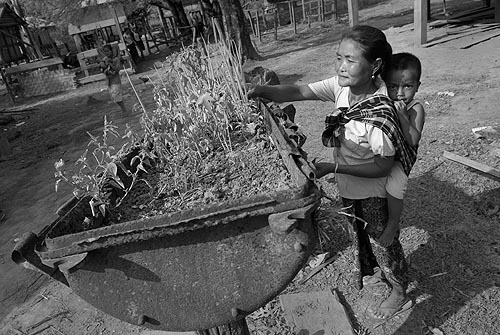 A villager in Boualapha tends her herb garden, planted in a type of bomb dropped during the early stages of the American war in Laos. Boualapha, near the Vietnam border, remains one of the country’s most contaminated regions. 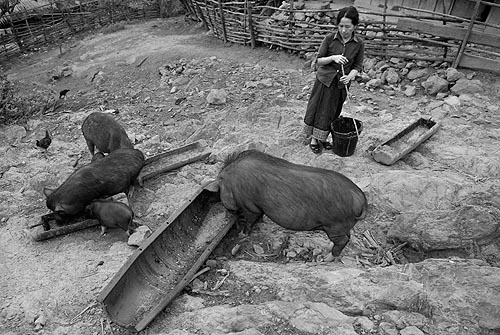 A pig feeds from a bomb casing that has been used as a trough for years in Ban Pakeo village. 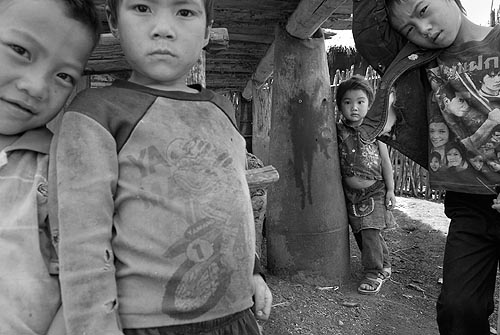 Children stand beneath a rice storage hut built atop posts made from bomb casings in Xieng Khouang province. 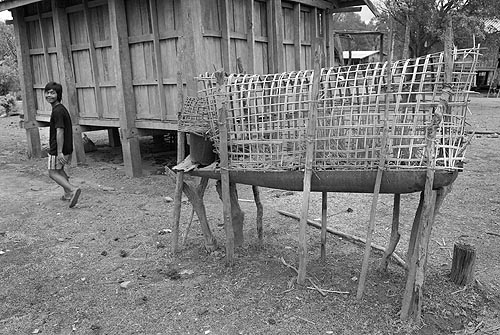 A bomb casing serves as a planter in Najat village, where scrap-metal collecting is one of the community’s largest—and deadliest—sources of income.

7 replies on “This Garden Is the Bomb”

Wow, talk about turning something deadly into a something so positive! The story behind this and the photos are really great. We’ve recently been giving talks in our hometowns and we mention the US bombing in Laos and how we never felt any animosity when traveling through the region. It’s amazing how many people still do not know that Laos was even bombed, much less the extent to which it was bombed.

Swords into plowshares, and bomb casings into gardens. Very fitting.

Amazing, Karen. I remember when I lived in Vietnam in the 1990s, I went to a wedding, and an old US tank was used as a shelf behind the bar for storing beer. Necessity is the strangest mother of invention!

Audrey, you’re right. A Hmong guide in Xieng Khouang said many American tourists tell him they learn about the bombings for the first time while visiting the province. “We never read in the history book,” they tell him. I know I didn’t learn it in school.

Jenny, they go hand-in-hand with the machetes, knives, boats, bowls, pails, ladders, spoons, lamps and other gadgets made from bomb scrap.

Kim, that’s a great story. (Shouldn’t give Jerry any ideas, though… he’ll want to bring home a tank next trip.)

An ironic, strangely optimistic approach to such devastation. It speaks to the adaptive strength of a people to ?adjust? This is a type of resiliency I sometimes doubt my countrymen (and women) would have. We see pockets of it after natural disasters. We can rise up when the foe demolishing our world is Mother Nature. But I question the total cultural absorption of something into the lexicon of our daily life that had to do with being carpet bombed. Are we the silver spoon nation? With the exception of Pearl Harbor and maybe 9-11….and our responses was rapidly shifted OFF OUR SOIL. Psychologically, as a nation (which is a living organism unto itself) the Laotians were far more sturdy and “healthy” than most. They just assimilated the foreign instead of submitting and surrendering themselves to the outsiders. Food for thought today. Thank you Karen.

Lisa, thanks for such generous insights. We’re doing a lot in our project to examine how bombs have become “normal” in Laos. They are so much a part of everyday life, they almost have to be viewed as normal. Beyond turning bombs into tools, people have worked through their fears. People can’t sanely live in fear every minute of their lives. As one UXO accident survivor recently told me, of course he knew the likelihood that his field was contaminated with bombs. But some days, he forgot. He just didn’t think, day after day, minute after minute, I might die while I’m working.

This is still hard for me to grasp. I can’t fully fathom what it’s like to have so much danger, everywhere, all the time, to the point that people make a leap and let fear subside.