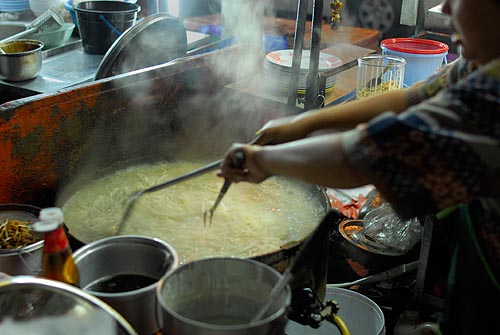 So much has happened in the past week—our reunion with Shu, the death of our friend Manophet, the eruption of Bangkok—I can’t process it yet. But here we sit, surrounded by concrete walls in a quiet, air-conditioned hotel amid dark and smoldering streets not long past curfew.

We arrived in Bangkok last night, around midnight, on the eve of a military crackdown on protesters who had occupied the city core for weeks. “What are you doing in Bangkok now?” the night desk man asked when we checked into our usual hotel, eerily quiet even at 1 a.m. We told him we were trying to go home (to finish our own work), but we’d left several bags at the hotel in February before departing for Laos. Jerry and I are not here to cover this story (many others have risked and sacrificed their lives already). But we had to make our way to the edge of urban warfare in order to get out.

From that vantage, on Sukhumvit Soi 2, the day progressed quietly despite the acrid scent of burning plastic and rubber, and towering black plumes in the distance. Our street was blocked, no traffic in or out. How strange to be two of only three guests at a normally packed hotel. We monitored the news minute by minute, watching the Bangkok Dangerous map and weighing our options: Should we stay? Should we go? We debated (and not always in the friendliest manner.) The hotel was just beyond the “no-man’s land” between soldiers and protesters, and we felt relatively safe inside as long as the violence didn’t spread.

But it did. After the military crushed the main Red Shirts protest camp, we began reading reports of fires scattered around Bangkok. We found a reliable taxi driver who squeezed through barricades and sweet-talked his way past soldiers to get us out and into a hotel near the airport. By the time we settled there, CentralWorld, one of Southeast Asia’s largest shopping malls, burned uncontrollably (you can watch the movie on YouTube or join the Facebook fan page). It’s apparently gone now. (And to think I’d hoped to buy new Tevas there before getting on the plane.)

It was a rush of activity tonight on Thanon Lat Krabang, near Suvarnabhumi. We ate pad thai at a small stall hurrying to fill big orders before the curfew went into effect. Dozens of customers buying last-minute beer filled the adjacent mini mart before the shop gates closed.

And now we wait—to see what the night brings, to see what the day brings, to finally board our plane (we hope) to San Francisco late tomorrow night. Meanwhile—because this is Bangkok, a city with infinite levels of surreal—we flip through channels and find the news in Burmese. It’s not Bangkok on the screen, but images from Cyclone Nargis, which struck two years ago. I listen to the voices and watch the shaky pictures, instantly reminded of where we were and what we were doing just a year and two weeks ago.

And then I look at another surreal set of images from Bangkok, May 19, 1992—precisely 18 years ago today. 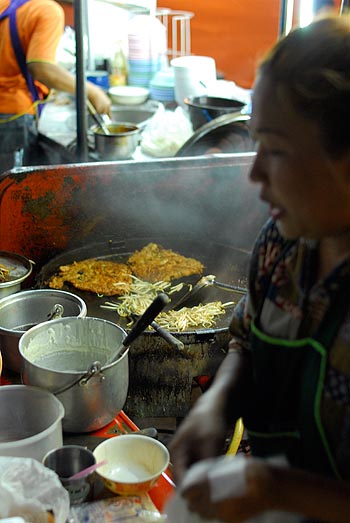 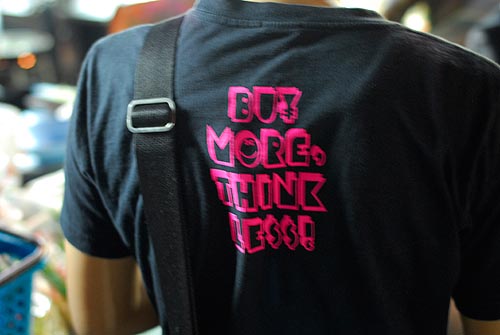 Irony on a black shirt. 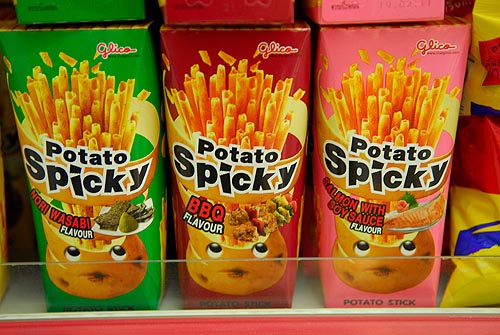 WTF? Jerry discovered these while scrounging for a snack this afternoon. He said, “I had no idea what to make of them. They are crunchy potato tubes with gobs of salt and MSG.” 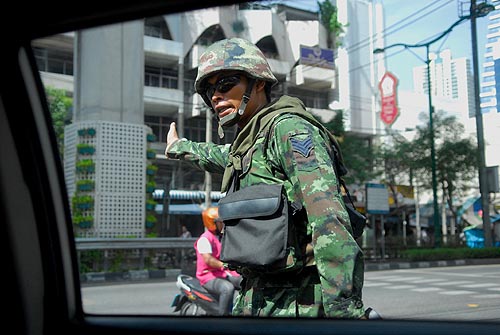 A soldier on Sukhumvit directs our taxi driver away from the trouble spots.

8 replies on “Bangkok on Fire”

I hope for peace and calm in Bangkok. I hope you are able to leave as planned, and that you both remain safe.

It makes me so sad to see news of Bangkok – a city that I really love and hope to live some day – and that the violence and destruction only seems to get worse. The news I read don’t seem to sound hopeful for a resolution soon. I hope you have an uneventful trip back to San Francisco. Safe travels!

What a memorable experience! I am amazed you write so vividly about it as you make your way through it all,minute by minute together. The wonderful clash between Karen’s writing and Jerry’s photos are..well,,like Ying and Yang. Great job, guys! Thank you for posting. Oh yeah, don’t die!

At the end Thai priminister Abhisit also same as north Korea and Myanmar Regime.
Why don’t all thai people against him. Once he grab the power never let go.I am sadden those people are killed by solider. Thailand can never be fully democracy country if Abhisit still in power.
Be united all Thai people.

This is quite crazy. I hope you keep away from the trouble. I hope Bangkok gets back to normal soon.

Thanks for all of your comments. Unfortunately, there is no resolution, and I think it will take a long time for peace to emerge.

[…] was billeted in an almost empty hotel We arrived in Bangkok last night, around midnight, on the eve of a military crackdown on […]

[…] was billeted in an almost empty hotel We arrived in Bangkok last night, around midnight, on the eve of a military crackdown on […]