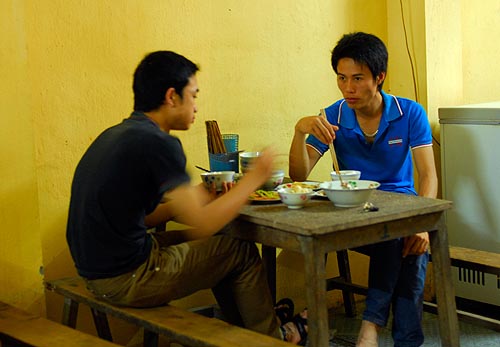 That’s Whipped with a capital W, and that’s precisely how I feel. Let’s just say it was an insane serpentine 9-hour bus ride, up one mountain and down another, between Sam Neua (Laos) and Thanh Hoa (Vietnam). After a hotel run-around not worth repeating, we finally found an acceptable room (after asking for new sheets) and the only open food stall within walking distance (above). It was nearly 9 p.m. Neither of us had eaten since the handful of sticky rice, dried buffalo and jaeow bong we picked up at the Sam Neua market around 7 a.m. Sometimes, the greatest food on earth is the food in your bowl when the tummy rumbles with day-long hunger and aching fatigue.

The next morning we caught a bus to Hanoi, where a thieving taxi driver managed to ring up an extra 18 km on his meter. He finally agreed to go away for 150,000 dong after Jerry started taking pictures of his face and his license plate.

But the worst was yet to come, when the two of us set out about Hanoi, trying to find the second necessary rabies shot for Jerry, who had tangled with a cat in Vieng Xay. He had had his first shot in Sam Neua, and he’ll need three more in the upcoming weeks. It took three hospitals, another series of taxi rip-offs and several hours to finally find a dose of Verorab at a private Hanoi clinic. (***If you are traveling through Asia and acquire a cat, dog or other animal bite/scratch, please please please get the entire series of rabies vaccinations ASAP.)

Since then, we’ve gone totally local in Hanoi, wandering the streets in a heat stupor, sitting on tiny stools while sipping ca phe sua da, digging into bowls of bun cha found in the narrowest corridors of this chaotic city of maniacal motos. I cannot believe how Hanoi has changed in the 14 years since I worked and studied here. It’s bursting at every edge. But it still showcases great little moments of serendipity. Yesterday, amid all these millions of people, we bumped into two journalist friends on the street—two of my former students, whom I hadn’t seen since we parted 18 months ago.

Tomorrow night (after Jerry successfully finds shot #3, we hope) we will depart on an overnight train for Lao Cai, en route to Sapa. We are finally going to see Shu! I won’t be posting for the next week or so. Our hours are extremely limited, and this whole vaccination fiasco has diminished the time we had hoped to spend with Shu. After just a few days in Sapa, we’ll be on another plane to Bangkok before yet another rush of travel.

We’ll have many stories to come. Big news and exciting plans. But right now, we must rest. And eat. 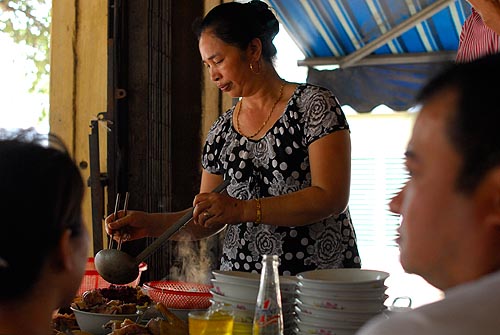 5 replies on “Whipped in Hanoi”

Hope you have a wonderful reunion visit with Shu! Just finished reading your post about meeting Shu and the Kyoto Journal article. Human beings can be so amazing and resilient — thank you for such a great story. (Good luck to Jerry on the rabies shots.)

So, jerry will not becoming a rabid photojournalist anytime soon?? Hope to see ya soon when ya get back. More safe travels to ya!

Good luck getting the shots! Looking forward to the next updates 🙂

Yikes… those long Vietnamese bus trips can feel like death… I can’t imagine adding to that all the other complications you’ve had to face! At least every destination in Vietnam seems to offer enough incredible food to make the hellish trips worthwhile… -X