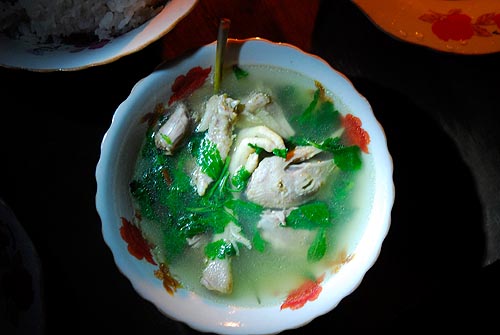 A while back, I posted my account of eating for nine days in the northern Lao village of Sophoon. That was an example of what comes to the dinner table when the hosts know they have guests to feed. A few days ago, we trekked to the Hmong village of Ban Pakeo, several hours on foot from another Hmong village outside of Phonsavanh. We went there for a variety of reasons (old jars, for one), and you’ll have the opportunity to read much more about this in the future. But first, let’s consider dinner.

Ban Pakeo has no electricity (though that might change if villagers agree on allowing solar panels into their community). When we visited five years ago, villagers had to walk up and down steep hills to retrieve small buckets of water (that’s changed, thanks to a couple of water taps installed by Engineers Without Borders and a man named Don May at Fort Lewis College). Ban Pakeo has a cell phone, but it takes an afternoon hike to charge the phone in the nearest roadside village. Bottom line: no one knew we were coming for dinner. We had no way of notifying them. When we arrived around 5 p.m., all but a handful of kids and a few adults were still working in the fields. This is so all across Laos–the rains have started and it’s planting time.

So the villagers offered a live chicken, and our guide found a few young women to cook (presumably they killed and prepared the chicken–we never saw it again until it appeared as pictured above).  They had no vegetables, but they did have steamed rice (the Hmong traditionally eat mountain rice grown in slash-and-burn fields; and some of the families here also grow wetland sticky rice). When dinner arrived on the table, around 8 p.m., it was soup, rice, and two leftover jaeows we had bought before the trek began. We finished it off with fresh mango, also purchased in town before we started hiking.

The broth was delicious–very salty (much needed after hours of sweating) and infused with a forest herb that tasted to me like the fragrant essence of Christmas trees–piney, green, minty. We were told this was a local herb eaten to restore strength and cure illness.

But where did half the chicken go? We got the head, the feet, the neck, some of the innards. But the breast? The meat? Nowhere to be seen.

Breakfast the next morning was sticky rice, more leftover jaeow, and more leftover soup. This, we know, is what most villagers eat on a daily basis–or some variation thereof. They eat what they have, they have very little, but they survive on what the land around them offers.

Good heavens, I can’t get over your pictures. Seriously. Amazing. I’m giving you the sunshine award on my blog because I just love what you are doing. You brighten my days when you update. http://readingforsanity.blogspot.com/2010/05/award-palooza.html

Thank you so much, Mark & Mindy. Sorry to say I’m feeling particularly exhausted and uninspired these past few days — too many travel hassles. But I’ll be back on my feet soon…

Wow, look at that chicken head in your soup! I assume you don’t eat it? Chin up, things will turn around again.