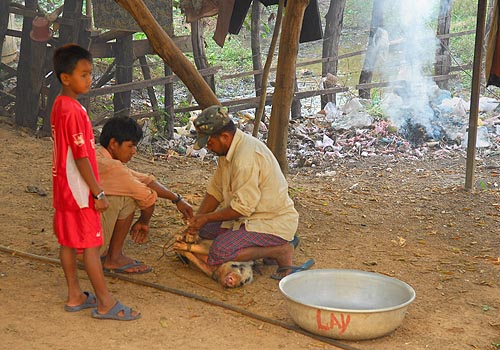 WARNING: Some readers might find the following photos offensive. This is the third in a three-part series on the lives and deaths of Asian pigs. Read about a Cambodian pig slaughter in The Faster Times. In much of Asia, butchery is a mundane duty, and the average villager knows precisely the origins of his dinner. This pig was killed for a celebration, a special event. The slaughter took just a few moments, swift and as careful as could be, given the setting and circumstances. Not a single part would go to waste.

As I noted in The Faster Times, I wrote this piece because I eat pig and I want to know, exactly, the steps that lead from field to plate. I realize many readers might find this offensive (even an ad for a Memorial Day sale on grass-fed ground beef at my local co-op drew criticism from vegetarians). But the bottom line remains: much of the world eats meat. Yet not everyone has the chance to see just how an animal becomes food. 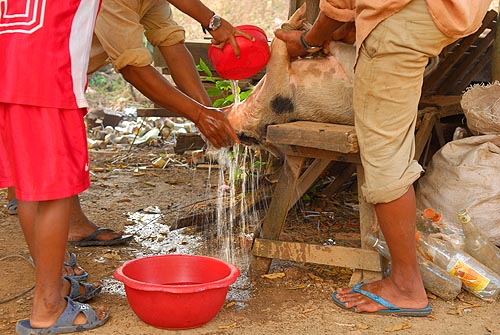 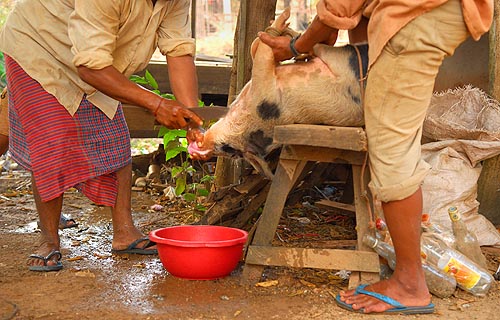 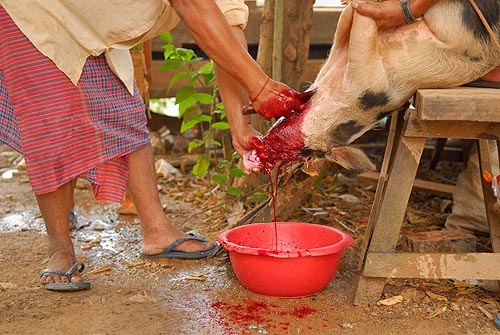 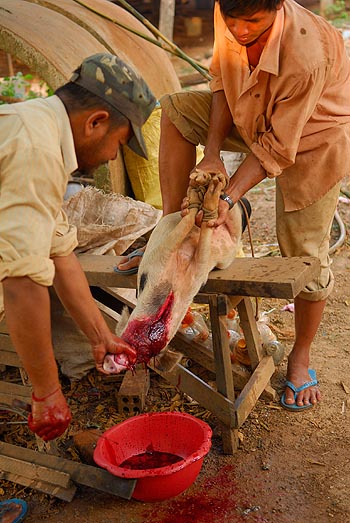 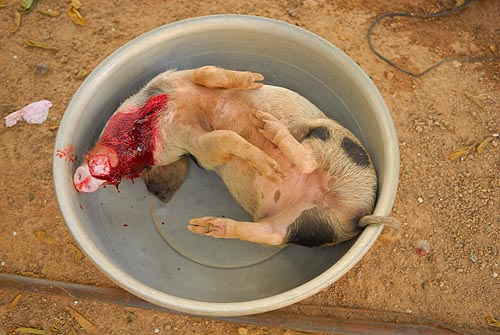 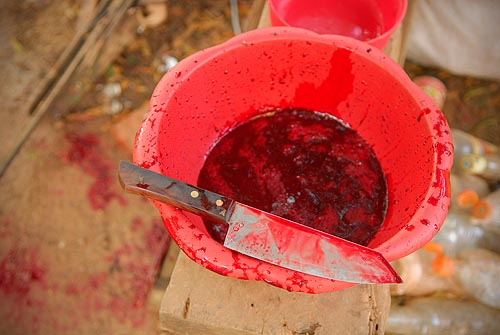 Thank you for sharing this ritual – it’s important that we know where (and how) our food comes from and that respect is important to give to that which give us our food.

Thanks, Belinda. I fully agree. I think, too, that a meal takes on a different dimension when the people eating it have a hand in raising, growing, collecting, catching and/or butchering the food.

[…] by Jerry Redfern. See a gallery of pictures from this pig slaughter on Rambling Spoon. […]

I once watched a similar ritual in Northern China with a lamb, that later became our dinner. This brings back many memories. Great post!

I agree it’s important to know where our food comes from. As a teenager I spent some time in Portugal. My relatives killed a pig every Christmas. It was such an event, it seemed the whole village was there. Every bit was used, even the blood to make a stew & then to make blood sausages.It was eye opening.

Very nice pictures and it is incredible how not a single part of the pig goes to waste. When I was in Congo we used to hang the pig by it’s hind legs and then butcher it in the same way.

My last photo assignment for the NR was a goat slaughter for an Ethiopian meal at a nearby church. Sad, but had to know what goes into eating my food.

Portuguese Kitchen, it’s fascinating to be at those sorts of rituals in which the entire community has a hand in the meal.

Mark, thanks. Curious, did the pig fight while hanging?

Andy, I saw a goat sacrifice at a temple in India – quick chop to the head, then immediately taken outside where a row of cooks took the entire carcass apart in about a minute.

These pictures are very tasteful. I’ve seen a lot of animals slaughtered, and it’s not easy to capture or describe tastefully. Well done.

I really appreciate it when people address such a common practice that is ignored a feared by many. In reality this family need food and rather than putting their meat through a killing machine sterilized by men we don’t know and packaged chemicals we can never pronounce the name of…they’ve treated it like the natural ritual it is. The animal is clearly calm because the people are treating it with respect. I genuinely believe if you couldn’t take part in such an act yourself you shouldn’t be eating it. Thanks for sharing.

Thanks, Stevie. I do think it’s ironic that such common practices are so infrequently viewed/discussed/photographed.

“They are killed with respect”… “it’s a chance to see how oir food comes from”… “i really appreciate it”
..
How could one be so sadistic, stupid, egoist, bestial…
Such idiotic comments are sads because it shows humanity has not evoluated since the age of stone

Thanks for the comment, Sam. I, too, often wonder how much humanity has or has not evolved. But more than 99 percent of us do consume animal in one form or another.