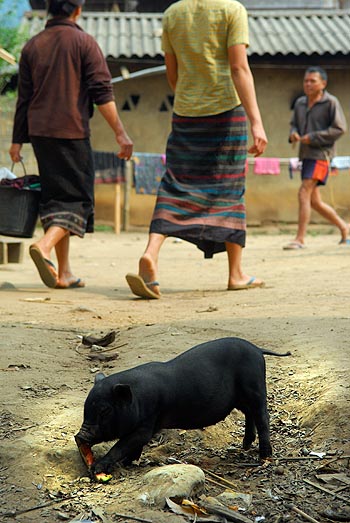 What do Lao villagers think about free-range vs. industrial farming? Find out in The Faster Times. This is the first in a three-part series on the lives and deaths of Asian pigs.

I wanted to add a P.S. here. While the article focuses on pigs, some of the villagers I interviewed had pointed opinions about free-range chickens as well. A young woman named Taeng, who raises a variety of farm animals, said she couldn’t really imagine cramming her chickens into a coop without letting them run freely. Ït’s not good for the animal,” she said.

Neither she nor her mother, Noi, had ever tasted industrial chicken, but they were certain village chicken tastes better. Her birds have thick, sturdy legs, she said. Industrial chickens, she imagined, must have very soft, flimsy legs from sitting in a coop all day. She didn’t think that would taste very good. “Farmed chickens, their legs are not too strong,” she said. “Chickens fed by nature are best.” By that, she meant chickens free to peck the earth for the food of their choosing.

I love this picture. What a good life pigs have in Lao!