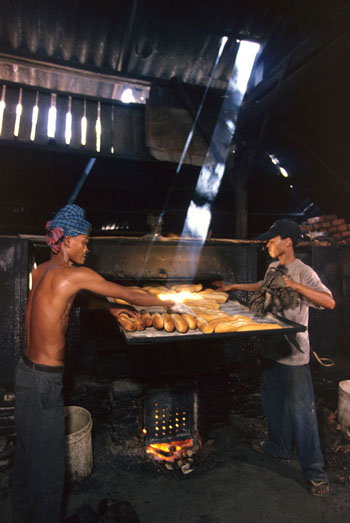 It was 1998 when Jerry first visited the 7 January Bread Co., named for the day the Vietnamese invaded Phnom Penh and ousted the Khmer Rouge. The factory is tucked in a big building, blackened with the soot of continuous fire. Young men hustled through the blazing heat of the giant ovens that cooked the capital’s popular sandwich bread and breakfast baguettes. I wasn’t along on that story, at that time, but I remember Jerry telling me about the light. And I remember the photo above, which stuck in my mind for years, pulling me back to Cambodia long after we had moved on. 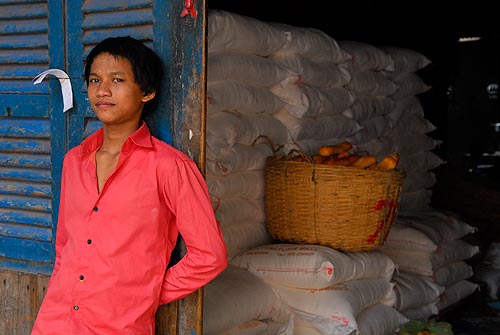 Move ahead a dozen years. It’s a muggy morning at the sort of hour when slanted orange sunlight beams on the brink of hot months to come. We ride up to the factory entrance and peek inside. It’s still here. Most everything looks the same, Jerry says, as though no time passed in a span of 12 years. The young men, of course, are different, but the conditions haven’t changed—except the light, if anything, has diminished. And the ovens have nearly doubled in size.

We chat a bit with 12-year-old Mouy Sang, the owner’s daughter, who says they use a simple recipe of flour, salt, yeast, egg and water, just as her grandfather did when he started the business in 1984.

“When my father retired, I started to be the boss,” says her father, Tang Pao Sreng. Business has grown through the years, though “the profit is not good.” His baguettes sell for 400 riel (10 cents) apiece, but sidewalk vendors up the price to $1 or more per sandwich. His bread goes all over town, and he bakes as many loaves as needed. “If someone orders a lot, we make more than 10,000 pieces of bread a day,” he says. “If someone orders 5,000 pieces, we make 5,000 pieces.” 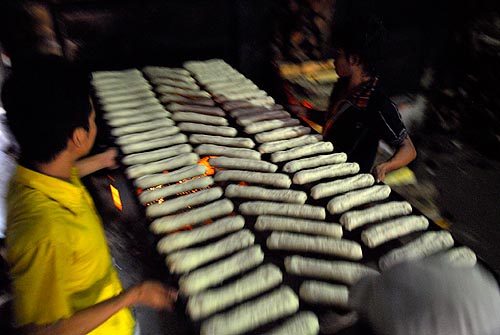 The factory is divided in half—one room dark and oppressive, with four giant ovens, each nearly the size of a single-car garage; the other room lighter and airier, with a two-story ceiling and a stainless steel Macadams Baking Systems industrial oven. Ancient cobwebs are dipped in dust and dripping from the rafters. Three fire extinguishers hang on the wall, almost unrecognizable beneath a blanket of soot.

This place smells human, of yeast and sweat and young men at work. It’s the scent of necessity. Most of the 20 to 30 employees come from other provinces where the only job is farming for an income that falls short of need. Here, they live on site and earn $2 a day, seven days a week. The bulk of their money goes back home. 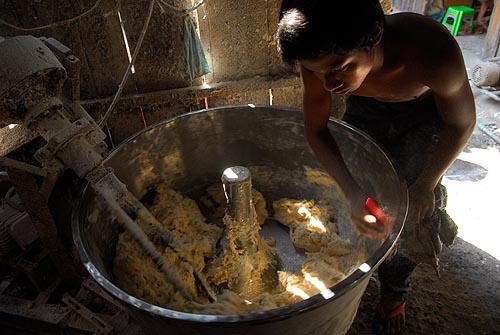 A thin man sits beside the doorway, weighing packages of yeast and salt. Around the corner, workers stack long, rectangular trays of uncooked loaves while a colleague sprays a fine film of water across the dough.

In the corner, by the door, sunlight streams through a storm of flour as two boys twirl a giant tub beneath a rotating mixer. Little dough dollops fly from the tub, splattering across the room. An orange cat snoozes beside a pink Buddhist shrine; it lifts its head in a look of utter contentment. Jerry asks Tang Pao Sreng about the feline’s proficiency in catching mice. He laughs. “Oooh, no! That’s a lazy cat.”

A couple of boxes hold the morning’s mistakes. “These are burnt so we keep for pig or chicken feed,” Tang Pao Sreng says. He delivers the crusty loaves to his relatives around Phnom Penh.

Each tray requires 30 minutes in the oven. Every few minutes, workers in mitts twirl the trays in a graceful maneuver that assures even baking. Meanwhile, two clean, woven mats are spread across the floor near the doorway, and a basket the size of a bathtub is placed on its side. When the bread is done, the trays are dumped, and hundreds of loaves cascade across the mats. The bread crackles in fresh heat, popping like Rice Krispies in milk. Five trays, six trays, seven, eight nine are emptied before the little shrine, as though each and every loaf is presented as a gift to the gods. 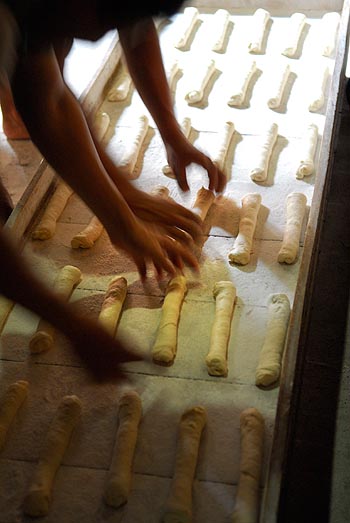 Workers squat on the edge of the mat, arranging loaves into symmetrical piles, then filling the giant basket for delivery across town. I chat with Hong Heng, 23, as he counts and moves the loaves. He arrived five years ago from Prey Veng province. “I came here to make a living. I was jobless there.” Every month, he sends money back to his parents. He works two shifts a day—3 a.m. to 7 a.m. and 9 a.m. to 5 p.m. The job is OK, he says, but he tires of bread. “I work with bread every day. I don’t want to eat it.” 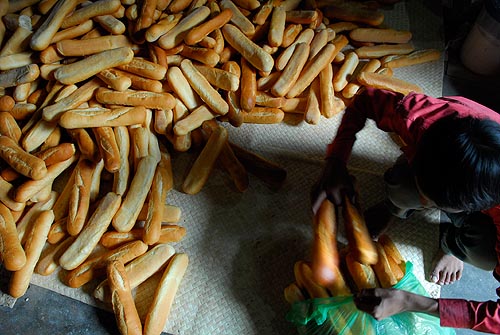 Jerry and I stay a few hours that morning, then return two days later, as workers unload a truck full of flour. Each man carries two sacks in the crook of his neck. Sweat follows a path down a tattooed arm. Meanwhile, another employee heaves an axe, breaking one log at a time into useful segments of wood to feed the belching fires. 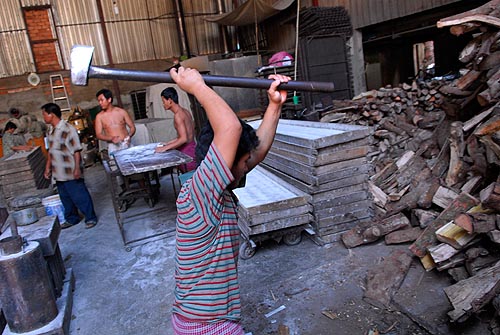 I talk with a young man named Kum Orn, who comes from the nearby province of Takeo. He used to make palm juice, not a lucrative living. So he moved to Phnom Penh “to have the city life,” meaning a steady job. He tells me his story while spinning dough in the dark corner of this photogenic room. I look around and think this place has charisma, with shafts of light that scream through holes in the roof. Smoke billows through narrow openings between two walls. It’s hard to imagine a setting with more picturesque light.

But I realize my perception of beauty is that of an observer, not a worker. I don’t shape wads of dough into little loaves, day after day, in a monotonous cycle. It’s hot, it’s stifling and repetitious. I wonder what Kum Orn thinks of the light in this room.

But is it pretty?

“I don’t know, I never think about that.”

I wonder what he thinks of my questions, or the fact that I’m here, looking around. I wonder what he sees in this place, which I find intriguing. Does Kum Orn think this factory is interesting?

“Yes, he says. “It’s interesting to me because I have a job here.” 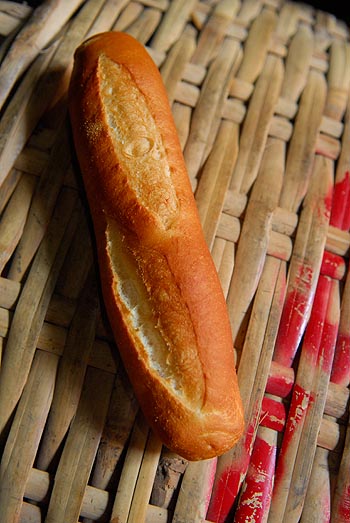 […] It was 1998 when Jerry first visited the 7 January Bread Co., named for the day the Vietnamese invaded Phnom Penh and ousted the Khmer Rouge. The factory is tucked in a big building, blackened with the soot of continuous fire. Young men hustled through the blazing heat of the giant ovens that cooked the capital’s popular sandwich bread and breakfast baguettes. I wasn’t along on that story, at that time, but I remember Jerry telling me about the light. And I remember the photo above, which stuck in my mind for years, pulling me back to Cambodia long after we had moved on. Read more. […]

Wow! As I looked at these beautiful pictures, I kept contrasting this with my vision of what an American bread factory would look like: fluorescent lights, gloves, booties. I doubt our bread would taste as good!

when I was in Sinapore thispast January I ran into this amazing bread bakery. It was this whole in the wall place. Just a small door that if you didn’t snoop around we would of found it. They where very gracious and let tour around and take picture. The bread was very delicious and amazing. Great entry made me relive my bread bakery experience.

It’s so good to see a different perspective from the one that most westerners would hold. We have the luxury of finding things interesting and valuing them for their own sake. I lived in a third world country for some time and the fact that the factory is interesting to him because he has a job, not for any other reason is so real. Life and making a living and just having the essentials are the focus, anything beyond that is often not considered, simply because it is totally irrelevant to day to day life, or just so far out of reach it’s not worth contemplating. Thank you for sharing this perspective and reminding me how it is indeed a luxury to contemplate things outside of keeping a roof over my head and feeding my children.

wow, that’s really intense. I’ve never seen something like this. It’s so crazy to see things different from the typical American view. Thank you for bringing this out.

May I know where in Phnom Penh I can learn the cambodian baguettes?

Hi Angela, the factory is on a small street behind the Royal Palace, and the bread is sold throughout the city. Head to the Palace neighborhood or any nearby market and look for streetside vendors selling fresh, warm bread in the morning!

Hi Karen, thank you for the reply. Do you know whether the factory will teach the foreigner to make the bread?

Angela, sorry… yes, the factory owner says many people come to him asking how to make the bread. He seemed open to giving lessons (on a very informal basis). He doesn’t speak English, so you will need a translator if you don’t speak Khmer.

The photographs are amazing and wonderful. Good job.

I like the fotos and the factory display. I want to have more knowledge on how to make bread so I can help create job for the unemployed in the society. please send me more tips.
Thanks.